This article treats the sext as part of the Liturgy of the Hours; for the musical interval see sixth . 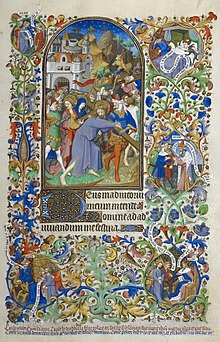 Illustration from the Bedford Book of Hours; Christ carries his cross

The sext (from the Latin sexta hora = sixth hour) is one of the three small ears in the prayer of the hours of the Catholic Church , along with the third and the non . It is prayed at the sixth hour of the ancient division of the day (around 12 o'clock) and is the noon prayer of the church. The capitulum from Gal 6,2  EU : Alter alterius onera portate: et sic adimplebitis legem Christi also points to the thematic orientation of the time of day to the cross, to the effort and burden of work ! - "If one carries the burden of the other, you will fulfill the law of Christ!"

In some monasteries, Sext and Non are combined to form a midday shore , which is usually prayed for a midday break from working hours.

The sext consists of: