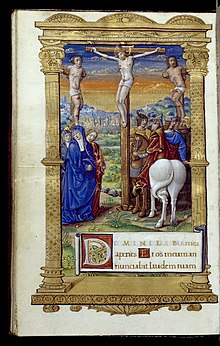 Page from the book of hours by Jean Pichore around 1520. The illumination with the initial shows the versicle of the invitatory.

The Matutin (e) (Latin ( hora ) matutina from matutinus , "morning"), also called the night office or vigil , is the night prayer in the liturgy of the hours . Matins are prayed between midnight and early morning. The origin of Matins in vigils ( Vigiliae ) of the early Christians . These gathered to prepare for a festival through fasting , prayer, and hearing the word of God. The German Mette for a night or early morning service is derived from the Latin name Matutin .

The part of the breviary that contains the matutines is also called the matutinale or nocturnale . Today the full Matins are only prayed in the contemplative orders and by some members of the consecrated life . The Carthusians celebrate the Matins as the longest of all hours of the night, while in most other contemplative orders it is celebrated in a somewhat shorter form in the morning. Since the liturgical reform of the Second Vatican Council , the Book of Hours of the Church has contained the reading horizons , which can be prayed at any time of the day and which can be expanded to Matutin or vigils in the morning or at night. As requested in the Council document Sacrosanctum Concilium on the sacred liturgy, these hours now consist of a smaller number of psalms and longer readings. The matutines on the cartages are called Karmetten or Tenebrae . The Vigil of Easter, the celebration of the Easter Vigil , also follows its own liturgy with its light celebration and long readings.

The full form of matins consists of two or three Nocturnes and has the following sequence:
After Eröffnungsversikel "Lord, open my lips, that my mouth your praise proclaim" is in daily hours of prayer a alternating with an antiphon responsorial carried forward Psalm as a prayer Invitation ( Invitatory ) sung, followed by a hymn of the day. This is followed by two or three sections (nocturnes). Each nocturn consists of several psalms followed by a longer reading. In the first nocturn a passage from the Bible is read and in the second nocturn another spiritual text, e.g. B. from the Church Fathers . On Sundays and high feasts , there is a third nocturn in which biblical cantica is sung instead of the psalms . Afterwards the gospel of the Sunday or solemn festival is recited and the Te Deum is sung. The day's prayer concludes the Matins .