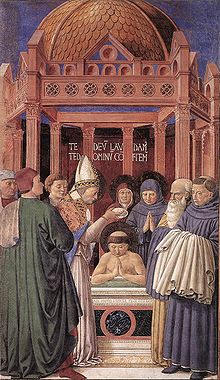 Baptism of Augustine by Bishop Ambrose

Te Deum (from Latin Te Deum laudamus , German You, God, we praise ) is the beginning of a solemn Latin song of praise, thanksgiving and supplication by the Christian Church. It was probably made in the 4th century, the author is unknown.

In terms of form, it is neither a metrical nor an accenthythmic hymn , but prose consisting of 29 unbound lines of various lengths. The structure shows parallels to Gloria in excelsis Deo . After several verses about God the Father and God the Son follow psalm verses. The central theme is the unification of the hymn of praise of the heavenly hosts, the apostles, prophets, and martyrs with the whole church for heavenly hymns. The praise of Christ relates to the essential contents of the creed and turns into requests for mercy and redemption as well as affirmations of the confidence in faith. Perhaps an original version ended with verse 21 (in gloria numerari [var. Lect .: munerari]).

The Te Deum is also known as the Ambrosian hymn of praise ( Hymnus Ambrosianus ). The original liturgical location is controversial (the following are being considered: part of an Easter vigil ; derivation from ancient Greek evening hymns) and the question of the author. The medieval tradition (mentioned in manuscripts from the late 8th century) According created both by the Holy Spirit taken saint Ambrose of Milan and Augustine together this song: When Augustine as an adult Easter 387 in Milan the baptism received, Bishop Ambrose got this hymn intoned; Augustine replied in verses. Other authors such as Hilarius von Poitiers are also mentioned occasionally. More recently, Niketas , the bishop of Remesiana (around 400), is believed to be the author, but this assignment remains highly uncertain.

Evidence goes back to the early 6th century. Whether the origin can be traced back to the first half of the 4th century, the time of Ambrosian chant , from which it differs fundamentally in formal terms, remains uncertain. The present form is the first time in Antiphonarium Benchorense of Bangor ( Ireland handed down by 690). In the handwritten tradition, three reviews, a Milanese, an Irish and a Mozarabic version, can be distinguished from each other, which differ not only in their readings (variations in the wording) but also in their verse. Since the 9th century, translations into vernacular languages ​​and metrical versifications in Latin have been documented.

Martin Luther described the Te Deum as the third creed , along with the Credo (“I believe” - beginning of the Apostolic or the parallel developed Nicene-Constantinopolitan Creed ) and the Quicumque (“Whoever wants to be saved” - beginning of the Athanasian Creed ) . In 1529 he translated the text as rhyming alternating chants into German ( Lord God, we praise you ) and simplified the traditional Gregorian melody. In 1771 the Te Deum was copied by Ignaz Franz and in this version became a hymn as Great God, we praise you (Musik Wien, 1774). 1950 was the Te Deum by Romano Guardini transmitted by an authoritative translation into German and again as contrafactum with the Gregorian melody to the old Gotteslob taken (GL old 706).

The meaning of the Te Deum as a song of thanks (pro gratiarum actione) "on many occasions (e.g. abbot and abbess election, episcopal ordination, papal election, royal coronation)" led to its use as "acclamatory approval". From the Baroque onwards, the Te deum was used "for courtly and state ceremonies", but was replaced in France by the Marseillaise since the French Revolution .

Text of the Te Deum

In the reading chamber of the Liturgy of the Hours on Sundays outside of Lent, in the octaves of Christmas and Easter, on feasts and festivals, the Te Deum follows the responsory of the second reading . In addition, it is also heard in church services in which there is an occasion for thanksgiving, such as after processions and ordinations , and in the past also often after the coronation of kings and emperors .

In the Middle Ages the Te Deum was also used in the great Marienofficium . The less frequently documented Passionsofficium of a pseudo-Bonaventure also started the Te Deum . The Te Deum is documented for the first time in the so-called Ratold Ordo , which is set around 980. The people then moved into the church at the beginning of the king's insurrection and agreed to the Te Deum as an expression of approval, while the future king was led by two bishops to the altar and prostrated himself there until the end of the chant. The Te Deum can be found again in the so-called Ordo von Arras , a mixture of the Mainz Ordo and the Ratold Ordo from the first half of the 11th century. After the throne, the king promised the archbishop to keep peace for the people, to protect them and to be a just judge towards them. After the congratulations from the clergy and the kiss of peace had been received, the Te Deum rang out before a large procession began the actual coronation mass. The process is reproduced in a very similar way in the Ordo of Saint-Bertin (originated around 1150/1200) and in the Ordo of 1200 . For the imperial coronation of 1529, it is said that the Lateran canons sang the Te Deum when the emperor took possession of their church by celebrating mass there. On such occasions, the full bells of the church and all altar bells are often rung.

The Gregorian Te Deum is sung or prayed by the cardinals who are entitled to vote, especially after a papal election .

When Elisabeth of Thuringia left the Wartburg in late autumn 1227, she had a Te Deum sung.

There are many settings, mostly of the Latin text, which are performed at concerts around the world (see list of settings in the Te Deum ).

The bells of churches are often tuned to the opening notes (e – g – a) of the Gregorian Te Deum ("Te-Deum-chimes").

Live broadcasts by the European Broadcasting Union will begin with the beginning of the introduction to the Te Deum by French composer Marc-Antoine Charpentier .

The writer Robert Hohlbaum called one of his works (1950) the Tedeum .

In Gregorian chant , several melodies of the Te Deum have been handed down, including in the tonus sollemnis ("solemn tone") and simplified in the tone simplex ("simple tone"). These chants all begin with the pitch sequence e - g– a and are mostly notated in the third mode . In the middle part and at the end, however, there are also some verses in the related fourth mode, in which the melody also falls under the opening and closing note e .

The earliest polyphonic versions date from the 13th century, later from the 15th and 16th centuries. They were sung alternately between the congregation and the choir. All of these pieces were based on the original chorale melody as a cantus firmus . Famous composers from all ages have set the Te Deum to music (see list of settings of the Te Deum ).

Beginning of Charpentier's Te Deum, arranged as an organ solo

Among the composers of modern times , Giovanni Pierluigi da Palestrina wrote a Te Deum for the first time in the 16th century.

In the baroque period the Te Deum played an important role in courtly representation. This can be seen, among other things, in the sumptuous compositions by Jean-Baptiste Lully as court composer of Louis XIV and Marc-Antoine Charpentier . Several works by the Viennese court are also known, such as the Coronation Te Deum by Johann Joseph Fux or the Te Deum in D major by Marc'Antonio Ziani . Six settings of the text come from Georg Friedrich Händel . For the first time with a German text, Johann Sebastian Bach composed hymns and cantatas of praise for church use (Lord God, we praise you) . In the Wiener Klassik , both Joseph Haydn and Wolfgang Amadeus Mozart wrote a Te Deum with again a Latin text. In the Romantic era , composers began to dedicate themselves to this type of work as an almost secular text. They include the Czech Antonín Dvořák , the French Georges Bizet and Hector Berlioz, and the Italian Giuseppe Verdi , whose Te Deum has a certain special status; it is the fourth part of the Quattro pezzi sacri . With this work, the Te Deum finally established itself as a pure concert piece without ties to the Christian liturgy .

One of the most popular and perhaps the most listed and on phonograms recorded Te Deum wrote the Austrian Anton Bruckner , who is also for the purpose of concert performances certain (as a substitute for an unfinished final movement of his Symphony No. 9 ). After Bruckner, the conductor  Wilhelm Furtwängler turned to the Te Deum as a composer, which, in its powerful, solemn expression, seems to try to outdo Bruckner's model. Other composers from the Romantic period and the 20th century were Edward Elgar , Benjamin Britten , Josef Schelb , Krzysztof Penderecki and Arvo Pärt , who wrote a Te Deum .

The popular hymn by Ignaz Franz (1719–1790) Great God, we praise you is based on the Te deum and has gained non-denominational significance.

See also: List of settings of the Te Deum .