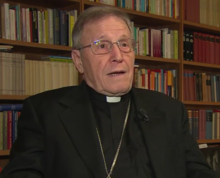 Walter Cardinal Kasper (born March 5, 1933 in Heidenheim an der Brenz ) is a retired Curia Cardinal and former President of the Pontifical Council for the Promotion of Christian Unity . Before that he was Bishop of Rottenburg-Stuttgart from 1989 to 1999 .

Kasper grew up in Wangen im Allgäu and graduated from high school in Ehingen an der Donau in 1952 . He then studied Catholic theology and philosophy at the Eberhard Karls University in Tübingen , in the Wilhelmsstift Tübingen and at the Ludwig Maximilians University in Munich . In 1956 he completed his studies and was ordained a priest on April 6, 1957 in Rottenburg . In 1961, after completing a dissertation entitled The Doctrine of Tradition in the Roman School. (Giovanni Perrone, Carlo Passasslia, Clemens Schrader) at the University of Tübingen for Dr. theol. PhD ; In 1964 he completed his habilitation after an assistantship with Hans Küng .

In the same year Kasper received a reputation as a professor of dogmatic theology at the Westphalian Wilhelms University in Muenster and was there in the summer semester 1970 dean of the Catholic Theological Faculty. During his time in Münster, Kasper was one of the founders of the church reform-oriented Freckenhorster Circle and was elected one of its first speakers in 1969. From 1970 Kasper taught dogmatics at the University of Tübingen and was involved in the church dispute over Hans Küng's teaching permit in 1979/80, in which case he spoke out in favor of his exclusion from the faculty. In 1983 he was visiting professor at the Catholic University of America (CUA) in Washington, DC. He was special secretary of the Extraordinary Synod of Bishops in 1985, as well as a member of the Faith and Order Commission of the WCC and the International Commission of Theology in Rome . From 1993 to 2001 he published the third edition of the Lexicon for Theology and Church .

On April 4, 1989, Kasper was elected to succeed Bishop Georg Moser as Bishop of the Diocese of Rottenburg-Stuttgart , was appointed by Pope John Paul II on April 17, and was ordained bishop on June 17, 1989 in Rottenburg. The archbishop of Freiburg im Breisgau, Oskar Saier , donated him his episcopal ordination . Co- consecrators were the Mainz bishop Karl Lehmann and Franz Josef Kuhnle , auxiliary bishop in Rottenburg-Stuttgart. His motto is Veritatem in caritate ("truth in charity"). Bishop Kasper was Chairman of the World Church Commission and Deputy Chairman of the Faith Commission of the German Bishops' Conference.

On March 16, 1999, Pope John Paul II appointed Bishop Kasper as secretary of the Pontifical Council for Promoting Christian Unity . Kasper therefore resigned as Bishop of Rottenburg-Stuttgart with effect from May 31, 1999. When he started working in the service of the Holy See , he received the Vatican citizenship , which is function-related and is usually limited to the duration of the function in the Vatican. Since it can in principle be cumulated, it is acquired in addition to an existing one.

On February 21, 2001, Kasper was accepted into the College of Cardinals by John Paul II as a cardinal deacon with the title diaconia Ognissanti in Via Appia Nuova . In the same year, on March 3, John Paul II appointed him President of the Pontifical Council for Promoting Christian Unity, which was responsible for ecumenical issues and religious relations with Judaism . On April 21, 2005 he was welcomed by Pope Benedict XVI. re-elected and 21 February 2011 while maintaining its pro hac vice to the titular church declared Title Diakonie to the rank of cardinal priests charged. Cardinal Kasper was a member of the Congregation for the Doctrine of the Faith , the Congregation for the Oriental Churches , the Apostolic Signature , the Pontifical Council for Legal Texts and the Pontifical Council for Culture until he was 80 .

On July 1, 2010, Pope Benedict XVI. He accepted his resignation from the office of President of the Pontifical Council for the Promotion of Christian Unity - after two rejections in 2008 and 2009 - and appointed Basel Bishop Kurt Koch as his successor.

Kasper took part as a cardinal in the conclave that elected Joseph Ratzinger Pope on April 19, 2005. Since he did not turn 80 until after the Sedis vacancy began on February 28, 2013, he was still able to take part in the conclave for the election of Francis' successor .

On Palm Sunday 2017, Walter Kasper celebrated his diamond (60th) jubilee as a priest in the Roman church of Santa Maria dell'Anima .

During his first Angelus prayer, the new Pope Francis said that Kasper was a great theologian and that his book on Mercy had done him very good these days . In his first cardinal consistory on February 21, 2014 , Francis declared that he had found deep theology and carefree thinking in Cardinal Kasper's work. This meant "doing theology on your knees".

The cardinal is a member of the following units of the Roman Curia :

A large part of Walter Kasper's work is being re-edited by Herder Verlag in the 18-volume book series Collected Writings . So far (as of March 15, 2013) nine volumes have been published:

Bishops of Rottenburg-Stuttgart (since 1821)