Entrance hall of the main building

The University of Uppsala ( Swedish : Uppsala universitet ; Latin : Universitas Regia Upsaliensis ) was founded in 1477 by Archbishop Jakob Ulfsson and the regent Sten Sture the Elder in Uppsala , making it the oldest still existing university in Scandinavia .

The main library of the university is well known: Carolina Rediviva .

In a bull addressed to Archbishop Jakob Ulfsson on February 27, 1477, Pope Sixtus IV gave his consent to set up a studium generale in Sweden. It should be based on the University of Bologna . The respective archbishop was designated as chancellor. The Swedish Imperial Council approved the plans on July 2, 1477, and so the university began imparting knowledge to students on October 7, 1477. The Reformation led to a crisis with prolonged interruption of teaching. However, the Synod of Uppsala decided to revive the university, which happened in 1595.

Early heyday in the 17th and 18th centuries

Between 1620 and 1780 the university experienced a great period. In connection with the great power position in the Baltic Sea region, law was promoted. Many well-known medical and natural scientists also worked.

Some of the historical books came from Germany and came to Sweden as looted art from the Thirty Years' War , including books from Würzburg libraries, outstandingly the court library of Würzburg Prince-Bishop Julius Echter , which was set up at the Marienberg Fortress . Other booty items come from the possession of Nicolaus Copernicus or from one of the Swedish-Polish wars .

Science declined in the first half of the 19th century. A well-known teacher was the historian and writer Erik Gustav Geijer .

For the anniversary in 1877, the new main university building was built. The historian Ellen Fries was the first woman in Scandinavia to receive her doctorate in 1883 . Axel Hägerström's philosophy influenced Swedish legislation and jurisprudence for a long time. Well-known natural scientists such as the Nobel Prize winners The Svedberg and Manne Siegbahn worked here again . In 1945 4500 students were registered.

Seal of the University of Uppsala (1973)

By 1969 the number of students had quadrupled to 20,000. Another expansion happened in the 1990s. Classes were spread across different buildings in the city.

The Swedish crime film The Mark of the Murderer was shot in part at Uppsala University. 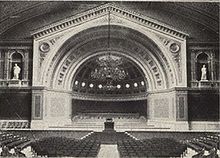 V
Universities and colleges in Sweden