Maria as ruler surrounded by the coats of arms her subject areas.

On January 5th, Charles the Bold of Burgundy fell in the battle of Nancy against Duke Réné of Lorraine and the Confederation . This ends the Burgundian Wars , which had been going on since 1474 . The Burgundian lands are inherited by Mary of Burgundy , daughter of Charles the Bold. On February 11, it guaranteed the Dutch provinces extensive freedoms in the Grand Privilege .

But France's King Louis XI. makes claims and takes the Burgundian cities in Picardy , Artois , Flanders , Hainaut and the Duchy of Burgundy as an open fiefdom . He did not achieve any further territorial gains, because on August 19th Maria Maximilian I married , who thereby acquired territories in the Netherlands and France for the House of Habsburg .

After the battle, returning soldiers from Uri and Schwyz, who were dissatisfied with the distribution of booty , found the so-called Society of Real Life , which set out for western Switzerland to demand the pledged amount of loot from Geneva. Soldiers from other parts of Central Switzerland also join the so-called Saubannerzug along the way. The number of those involved in the train is estimated at 1,700 people. Bern and the other federal locations as well as the cities of Geneva, Basel and Strasbourg, which are currently in negotiations with France and Savoy, send envoys to the insurgents, who succeeded on March 4th, the train that has already reached Payerne and Lausanne is to stop. Geneva must immediately pay off part of the money owed. The rest are held hostage. After the move, Geneva entered into first castle rights with Bern and Friborg in order to protect itself from further troops. The resulting conflict between town and country towns was only resolved by the Stans Decree of 1481. 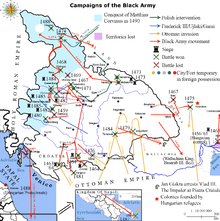 With the end of the Ōnin War , the Sengoku period began in Japan , a nearly one hundred year epoch in which the shogunate lost its importance and there was no central power. The era is also known as the Warring States Period . With the end of central rule in this time a new type of feudal lord occurs Shugo - daimyo . 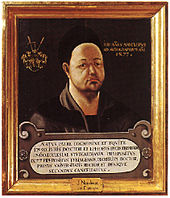