Si (e) gmund or Sigismund called the rich in coins , also Duke Siegmund of Tyrol (born October 26, 1427 in Innsbruck ; †  March 4, 1496 in Innsbruck) was titular archduke of Austria and regent of Upper Austria ( Tyrol and Upper Austria ).

Motto: To an armored rider who blows in on the right with an inserted lance the motto: Laudanda est voluntas .

When his father died, Siegmund was just twelve years old. Friedrich III. whose cousin he was was appointed his guardian. In order to expand his influence towards the west, Siegmund was to marry the French king's daughter Radegunde, the eldest of Charles VII the Victorious . However, she died before the marriage in 1445. Since Tyrol was a lucrative source of income for Friedrich, he practically held Sigmund prisoner until he was 19. Only when the Tyrolean estates threatened him with war did he let young Sigmund go.

In 1446 Sigmund took up his reign over Tyrol and Upper Austria, and Innsbruck became his seat of government . Until his death, he had a conflict with Nikolaus Cusanus , the then Bishop of Brixen , over the areas of the Inn , Eisack and Pustertal valleys . On February 12, 1449 Sigmund married Princess Eleonore of Scotland (1431-1480), daughter of King Jacob I of Scotland and his wife Joan Beaufort, in Innsbruck .

In 1451 he acquired half of the county of Bregenz from Elisabeth von Hochberg  (Hachberg), the heir to Wilhelm VII of Montfort († 1422). In 1453 he also won Tannberg and Mittelberg ( Großes and Kleines Walsertal ) and installed his wife Eleonore as ruler. On May 10, 1458, he received the Habsburg-Swabian inheritance dispute from Archduke Albrecht VI, but in 1461 he ceded it again.

The conflict with the now the Cardinal crowned Nicholas of Cusa, which was sparked by possessing legal problems grew into a fundamental dispute between religious and secular violence and had to Sigmund 1460 the excommunication by Pope Pius II. Consequence. 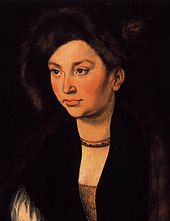 Since he amassed a large amount of debt because of his dissolute and unrestrained lifestyle, in 1469 he sold to Charles the Bold (the Duke of Burgundy ) the County of Pfirt (his great-grandmother's inheritance), the Landgraviate of Alsace , the Breisgau and a few other cities, but retained the Sundgau and for itself the right to repurchase. In 1474 he acquired additional territory in what would later become Vorarlberg with the county of Sonnenberg , which he bought from Eberhard I von Waldburg-Sonnenberg .

In 1477 Sigmund was officially made Archduke by Emperor Friedrich (together with himself and the other Habsburg dukes) .

On February 24, 1484, he married 16-year-old Princess Katharina von Sachsen (1468–1524), daughter of Duke Albrecht the hearted of Saxony and his wife Sidonie of Bohemia, in Innsbruck for the second time . The marriage remained childless. However, Siegmund is said to have had a large number of illegitimate children. These children began to use his nickname in honor of their grandfather.

In the same year he relocated the Tyrolean sovereign mint from Meran to Hall in Tyrol , which initiated the rise of this city - as the center of the Tyrolean salt trade and western head-end of the Inn shipping - to become the most important trading city in the country. The rich in coins is therefore also the father of the famous guldiner , minted for the first time in Hall in 1486 , who became a model for the entire European coinage (16th to 18th centuries). At the same time - during the entire last quarter of the 15th century - Sigmund had Firmian Castle near Bozen expanded into the monumental Sigmundskron military fortress named after him in order to have a garrison on the border with northern Italy.

Duke Sigmund's portal coat of arms at the Sigmundskron Fortress near Bozen, dated 1474

Duke Siegmund promoted humanistic writers and translators such as Heinrich Steinhöwel as well as the production of legal, historiographical and other writings at his court and paid important physicians of his time such as Ulrich Ellenbog and Adolph Occo or Klaus von Matrei as personal physicians.

Sigmund began a war of aggression against Venice in 1487 , which, however, did not bring any territorial gains to either side. One consequence of this conflict was the relocation of the important Bozen markets to Mittenwald , and depending on his financier Georg Gossembrot , the lord of the castle of Ehrenberg near Reutte , Siegmund issued an order in 1488 to send goods to Augsburg via Telfs and the Fernpass and no longer via to transport the Zirler Berg , Seefeld and Scharnitz . In 1490, at the massive pressure of the Tyrolean estates, he had to hand over government affairs to King Maximilian I , and the entire Habsburg Empire came back into common hands.

When Archduke Sigmund died in 1496, the Tyrolean branch line of the Leopoldine line became extinct . He was buried in Stams Abbey, where a statue in the so-called Austrian grave commemorates him.

From her first marriage in 1449 with Princess Eleonore (1431–1480), daughter of King James I of Scotland and his wife Joan Beaufort , there were no descendants. (The fact that there was a son Wolfgang (* / † November 20, 1480) - mentioned variously in the literature - has meanwhile been disproved. This is likely to be confused with the Duke's older brother of the same name, who died as a child.)

Also from his second marriage in 1484 to Princess Katharina (1468–1524), daughter of Duke Albrecht the Courageous of Saxony and his wife Princess Sidonie of Bohemia , there were no offspring.

The Tyrolean branch line of the Habsburg Leopoldines ended with Sigismund .

In the Belvedere in Vienna there is a portrait of Sigismund the Rich in Coin with a bow tie depicted on the sitter's doublet. It is unclear whether this fly has to be interpreted as a symbol of transience or as a trompe-l'oeil : Flavius ​​Philostratos already tells the story of a painter who had to acknowledge the talent of a competitor after trying to paint a fly chase away. Something similar was reported about the young Giotto and his teacher.