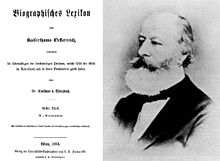 End pages to "Biographical Lexicon of the Austrian Empire" 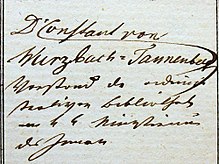 Knight Constant Wurzbach von Tannenberg (born April 11, 1818 in Laibach , † August 18, 1893 in Berchtesgaden ) was an Austrian bibliographer , lexicographer and writer . His life's work is the 60-volume Biographical Lexicon of the Austrian Empire .

Wurzbach, who was baptized with the name Eduard Konstantin Michael, was the seventh of ten sons of the lawyer Maximilian Wurzbach (who was raised to the nobility in 1854 with the predicate "Edler von Tannenberg") and Josefina Pinter. He grew up in Ljubljana and completed a degree in philosophy at the Lyceum there . Inspired by contacts with writers from Ljubljana, he made his own poetic “steps” and worked for magazines. Inspired by the poetry of Nikolaus Lenau and Anastasius Grüns in his early youth , he wrote poems in German with his eldest brother Karl - both of whom belonged to the group of free-minded youth at the time. Several poems appeared in the Illyrische Blätter as early as 1834 . In 1835 he self-published his own poem, which he dedicated to one of his professors. In 1837 he published a translation of a sonnet by Cesare Betteloni (1808-1858).

His father, who disliked his son's poetic inclinations and " perhorresziert " them strictly , urged him to study law , which he started at the University of Graz in 1835 , but gave up after four semesters. He then joined the Galician Infantry Regiment "Count Nugent" in 1837 as a soldier , which was stationed in Krakow . As a cadet and under the pseudonym W. Constant , which was later used for lyrical and epic publications , he published his first volume of poems, Mosaik , in 1841 , which he dedicated to his father. Since he circumvented the censorship regulations for this, he negotiated a reprimand.

After being promoted to lieutenant in 1841, Wurzbach was assigned to a garrison in Lemberg . Parallel to his career as an officer , he studied at the university there and in 1843 was the first active Austrian officer to acquire a doctorate in philosophy . At the end of the same year he resigned from the army and took a job as a scriptor at the Lviv University Library. Then his father wrote to him to translate scriptor into German, then he would know what he is.

In 1843 he married Antonie Hinzinger, in the same year his daughter, the later actress and acting teacher, Theodora von Fiedler-Wurzbach and in 1845 the son Alfred , in 1849 the son Friedrich was born.

In 1847 Wurzbach took a position at the Lemberger Zeitung and experienced the revolutionary year of 1848 as a political journalist. From October, initially formally assigned to the court library in Vienna , he was offered the post of archivist in the Ministry of the Interior in December. He was given the task of building a library that would provide government agencies with the materials required for legislation. In April 1849 Wurzbach became the librarian of the administrative library and held this position until 1874.

Wurzbach had described his own work as "writing in the poetic, literary and cultural-historical and biographical field". During his several years' stay "in a Polish country" he learned its language, gained deeper insight into the interesting and rich literature of the Poles and was also active as a translator for the German people.

As part of this activity, bibliographical and biographical works were created, including the bibliographical-statistical overview of the literature of the Austrian imperial state that was published between 1853 and 1856 . After the years of construction, the importance of the library decreased and bibliographic work had to be stopped in 1859. Wurzbach's work Biographisches Lexikon des Kaiserthums Oesterreich , begun in 1855 , of which three volumes had appeared by 1858, was subsidized by the Imperial Academy of Sciences until it was completed in 1891. Wurzbach brought together over 24,000 biographies.

Elevation to the knighthood

In recognition of his literary merits, Constantin von Wurzbach, KK government councilor and head of the administrative library in the Ministry of the Interior, was awarded the Knight's Cross of the Franz Joseph Order by the Austrian Emperor and, in 1874, the Order of the Iron Crown III. Class awarded. With the award of the Order of the Iron Crown, Wurzbach's elevation to the hereditary Austrian knighthood was connected.

Fourth shield: 1: in silver on green ground through which a blue stream flows, a natural fir tree; 2: in red on a green three mountain three cut natural tree trunks with two knots each; 3: in blue a golden ball between two golden diagonal bars each with a blue star; 4: in silver on a green lawn, a red fort with two tin towers and a gate with a half-raised black portcullis, on the three-stepped gable a blue eagle. On the shield two helmets, on the right helmet with blue-silver blankets a wild man growing forward in a green foliage apron, holding an uprooted natural fir tree with his right hand, his left hand on his hip; on the left helmet with red and gold covers an armored arm, whose hand holds an open book with the letters AEIOU ; Motto : Sincere et constanter (upright and constant).

Residential or Wurzbachhaus in Berchtesgaden

After his knighthood, Wurzbach lived in Berchtesgaden until his death in 1893.

Although he was always objective and open-minded about anything foreign, he had cultivated German traditions and at the same time - despite some disappointments - remained an Austrian patriot with all his heart. Wurzbach found his final resting place in the - now "old" - cemetery in Berchtesgaden, and as the inscription says: "Far from the fatherland, which remembers it gratefully."

In 1894, Wurzbachgasse in Vienna's Rudolfsheim-Fünfhaus (15th district) was named after him.