Motto of Franz Joseph I.

A motto (also a motto ) is a maxim or motto given by a group of like-minded people, a person, a family or organization that should make their goal and claim clear. These are usually not uttered orally , like slogans , but in writing and come either from long traditions, communal determinations or decisive events such as a civil war or a revolution. The term motto was Germanized by Philipp von Zesen through the expression motto .

Today, many states have a motto, and other institutions also manage foreign exchange.

Map of modern states with motto

Mottos of cities and countries

Geneva coat of arms with motto

Many Swiss cantons have or had a motto. This can be found on canton coins (before 1850). 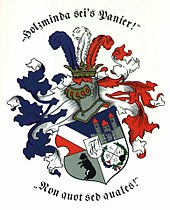 Coming from the time of the student orders, almost all student associations have a motto in their coat of arms. Examples for this are:

Traditionally, bishops and abbots of the Catholic Church choose a motto that can clarify the program of their pontificate . But priests and deacons can also give themselves a coat of arms and thus a coat of arms.

Motto of the fire brigades in Austria