Coat of arms of Wolfenbüttel 1570 (inscription: "From Hertzog Julio zu Braun: and Lüneb: etc. Is this fortress Heinrichsstadt genent, and gifted with this Ingesiegel, Anno MDLXX.")

Julius (born June 29, 1528 in Wolfenbüttel ; † May 3, 1589 ibid), Duke of Braunschweig and Lüneburg , Prince of Braunschweig-Wolfenbüttel , ruled from 1568 until his death in 1589 and is considered one of the most important rulers of his principality.

Julius was the fourth or third surviving son of Duke Henry the Younger . He had slightly crippled feet due to an accident in his early childhood. Nor did his character meet the criteria that his reckless father considered absolutely necessary for a ruler. Since he had two older brothers, Karl Viktor (1525–1553) and Philipp Magnus (1527–1553), he was trained for a career in the church.

Julius first studied in Cologne , then in Leuven in Flanders , and from 1550 he traveled to France . By the way, he bought a couple of chivalric novels there , which were to form the basis of the later world-famous Wolfenbüttel library .

During one of the many armed conflicts of that time, his two older brothers fell in the bloody battle near Sievershausen in 1553. Julius was suddenly heir to the throne, which his father displeased. Julius did not have the knightly ability and physical prowess that were then considered indispensable. Riding and hunting were not his. Instead, he had studied and learned about French culture . Julius also flirted with Protestantism , while his father was the last prince in northern Germany to defend Catholicism , and therefore fought with the Schmalkaldic League , suffered defeats and was imprisoned by his enemies. To avoid the dispute, Julius moved into Hesse Castle not far from the Wolfenbüttel residence , where several of his children were born. Here he familiarized himself with administrative issues and economic theories and tested his newly acquired skills in his office in Hessen.

Just two months after taking office, Duke Julius introduced the Reformation in his country . In addition, there was an administrative reform and a completely new economic policy based on mercantilism . Natural resources were developed and the infrastructure expanded. Mining and metallurgy in the Harz were promoted and the Oker (as a waterway between Wolfenbüttel and the Harz) made navigable. So the ores came to Wolfenbüttel by the fastest and safest route, where a flourishing arms industry developed. For a while, his armory housed the longest cannons in Germany, with which he was able to carry out test shots from a distance of up to six kilometers.

In 1568 Julius founded the University of Helmstedt (Alma Julia) as his state university with the Juleum as the main building. On January 1, 1569, he issued a church ordinance with which he enforced the Reformation in his territory.

In 1571, Duke Julius named the old craftsmen's settlement in front of the gates of his castle "Heinrichstadt" and expanded it into a modern city. (The name Wolfenbüttel was reserved for the actual castle district until 1747, today Heinrichstadt is the core of Wolfenbüttel's old town.)

In 1572 Duke Julius' administration was transferred from Harzburg to Bündheim and a new office building was built, as was a brass works. In the same year, he issued a Liberey regulation for his book collection , which has since grown considerably , which is the founding document of the Wolfenbüttel library.

The main problem that preoccupied many generations of his dynasty was overcoming the independence of the city of Braunschweig . Armed conflicts and mutual sieges took place regularly . The citizens of Brunswick did not want to be subjects to the dukes. Julius planned a more elegant way. He wanted to dry up the self-confident Hanseatic city of Braunschweig economically. To this end, he wanted to found a large commercial and industrial town called “Gotteslager” at the gates of Heinrichstadt - to compete with Braunschweig. He planned a big city with its own church , university and state-owned factories . Heinrichstadt was also massively rebuilt and modernized, above all with the help of foreign advisors. For example, the Dutchman Hans Vredeman de Vries dug a canal system to drain the urban area of ​​Wolfenbüttel , the remains of which still enliven the picturesque townscape today.

Lichttaler from 1586 with the symbol and motto of Duke Julius

Julius signed the concord formula of 1577 and the concord book of 1580, but after the dispute over the inauguration of his son as Prince-Bishop of Halberstadt made them not mandatory for his territory.

The land was expanded by inheritance. In 1582 parts of the County of Hoya fell to the death of Otto VIII von Hoya , and in 1584 the Principality of Braunschweig-Calenberg from his childless uncle Erich II. Julius left his son and successor Heinrich Julius a well-ordered and financially sound principality.

The burning light on his light coins , which is consumed, fits the motto of Duke Aliis inserviendo consumor ("In the service of others, I consume myself").

In 1585, the first coal mining was carried out in the Osterwald on his behalf.

Julius, whose training was geared towards a church career and who stayed as a canon in Cologne, was appointed Bishop of Minden by the Minden Cathedral Chapter on April 23, 1553 . A papal confirmation was denied to him, so that he remained bishop- elect or administrator for the diocese of Minden and the bishopric of Minden . His strict Catholic father tried all his life to prevent Julius, who was inclined to the Reformation, from ascending to the throne. It is therefore assumed that the election as bishop in Minden was part of his father's plan to “deport” Julius to a career in the church. After the death of Bishop Franz von Waldeck , who was defeated in armed conflicts with the Guelphs, the Guelphs had a certain right to the occupation of the vacant bishopric in Minden. As early as February 1554, however, Julius resigned as bishop elect in order to prepare for the reign in Wolfenbüttel, because since the surprising death of his two older brothers in 1553, Julius had been hereditary prince. As Bishop Elect, he tended towards the Reformation and thus stood in the ranks of his predecessor Franz von Waldeck, who had promoted Lutheran teaching in Minden. However, his term of office was too short to significantly influence the history of the diocese. To underline the Guelphs' claim to the diocese of Minden, Julius succeeded his uncle Georg von Braunschweig-Wolfenbüttel in the office of Minden Bishop.

His son Heinrich Julius , who succeeded him as Duke of Brunswick and Lüneburg and Prince of Brunswick-Wolfenbüttel in the government, was next to his episcopal office in Halberstadt from 1582 to 1585 also Bishop-Elekt in Minden. 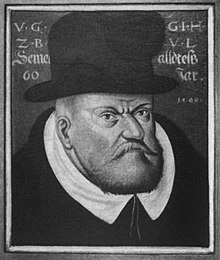 Duke Julius of Braunschweig-Lüneburg, portrait from 1590

Julius married Hedwig von Brandenburg (1540–1602) in 1560 , a daughter of Elector Joachim II of Brandenburg . She had the following children: