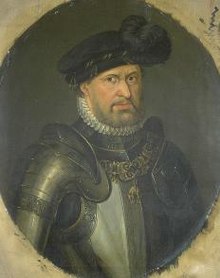 Heinrich II. (The younger) (born November 10, 1489 in Wolfenbüttel ; † June 11, 1568 ibid) was Duke of Braunschweig-Lüneburg , Prince of Braunschweig-Wolfenbüttel , ruled from 1514 until his death in 1568 and is considered the last Catholic Prince in the Lower Saxony area. Because of his long-term affair with a lady-in-waiting, from whom ten children emerged, he was also nicknamed the "wild Heinz von Wolfenbüttel" in the vernacular .

Heinrich was able to enlarge the territory of the duchy in the Hildesheim collegiate feud from 1519 to 1523. However, at the beginning of the feud on June 28, 1519 in the Battle of Soltau he was crushed. Only through the intervention of the newly elected Emperor Charles V did the defeat on the battlefield turn into a victory. In compensation for this he took part in the suppression of the peasant uprising in 1524/25 and otherwise became a loyal supporter of the emperor.

In 1531 the capital of his principality Braunschweig , which had already appointed Protestant preachers in 1528, joined the Protestant Schmalkaldic League . In this way, the inhabitants of the city tried to get rid of their Catholic rulers, in addition to changing their denominations, or at least to fight for the greatest possible urban autonomy.

When the Catholic estates merged to form the league in 1538 , Heinrich, who was a devout Catholic, therefore immediately joined and became one of the two federal governors of the league. The league, originally founded as a political-military counterweight to the Schmalkaldic League, remained largely insignificant and did not meet the expectations that Heinrich placed in it.

Only a victory by Charles V in the battle of Mühlberg over the Schmalkaldic League made his return possible in 1547. The recatholicization he initiated was only successfully combated by the city of Braunschweig. The free imperial city of Goslar, bordering on the duchy, was forced after a long dispute in 1552 ( Riechenberg Treaty ) to leave the profitable ore mines on the Rammelsberg to the duke.

He celebrated his last major military success in 1553 in the battle of Sievershausen . In this victorious but bloody battle against Albrecht II. Alcibiades (Brandenburg-Kulmbach) , his two eldest sons Karl Viktor and Philipp Magnus were killed - along with numerous other nobles. As a result, his third-born son Julius , who was physically slightly disabled from his youth, was entitled to inheritance. Julius was not considered to be particularly capable of governing in character and body (also because he openly sympathized with Protestantism ). In order to avoid the quarrel with his father, he settled at Hesse Castle, where he was preparing to take office. 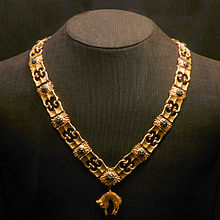 Collane of a knight of the Order of the Golden Fleece, as awarded to Heinrich.

Duke Heinrich II was considered a very organized prince who introduced many reforms, such as B. the chancellery regulations and the court court. His greatest achievement, however, was probably the introduction, implementation and imperial confirmation of the Primogenitur (already desired by his father) in Braunschweig-Wolfenbüttel. With this he prevailed against his brother Wilhelm, who sought a division of the principality in his favor, which was forbidden by the primogeniture.

The Braunschweig resident remained loyal to the emperor his entire life and was therefore awarded the Order of the Golden Fleece . As long as his brother refused to go to school, Heinrich II kept him under arrest for twelve years. The Pactum Henrico-Wilhelminum of November 16, 1535 sealed the end of the dispute and was confirmed by Emperor Charles V on January 12, 1539.

Heinrich also made an outstanding contribution to the Lower Harz metallurgy. Among other things, he founded the Frau-Sophien-Hütte in Langelsheim and the Frau-Marien-Hütte in Oker .

Heinrich held fast to Catholicism, even after all the other Guelph rulers and the cities of Braunschweig and Goslar had already introduced the Reformation .

Heinrich remained Catholic, but pursued an energetic ecclesiastical policy in his duchy that was oriented towards political needs. He moved church property, hollowed out the diocesan constitution in the diocese of Hildesheim , removed it in Halberstadt and carried out visitations . 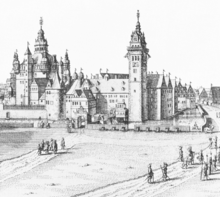 Wolfenbüttel Castle on an engraving from 1654

Heinrich converted the old moated castle Wolfenbüttel into Schloss Wolfenbüttel as a modern Renaissance building. The military function was taken over by early modern fortifications , which were built around the castle district and formed the core of the later important fortress Wolfenbüttel. Inside the fortress - on what is now the free Schlossplatz - there was a tight building. Further houses of officials and craftsmen were built in the area east of the fortress. The suburb was named To our dear women after the Lady Chapel there.

His son Julius later named the settlement of our dear women in front of the gates of his residential castle Wolfenbüttel Heinrichstadt . Today (after the name of the castle has passed on to the whole city ) Heinrichstadt is the core of Wolfenbüttel's old town.

Two mighty fortresses of Wolfenbüttel, the Karlsbastion and the Philippsberg, were named after the two princes who fell in the battle of Sievershausen in 1553.

Heinrich II's first marriage in 1515 was Maria (1496–1541), daughter of Count Heinrich of Württemberg , with whom he had the following children:

After the death of his first wife, Heinrich II married Sophia of Poland (1522–1575), a daughter of King Sigismund I of Poland.

Heinrich II had a long-term relationship with his wife's lady-in-waiting , Eva von Trott , whose death due to illness in Gandersheim after her dismissal was faked. Between 1532 and 1541, he secretly quartered the lady-in-waiting at Stauffenburg Castle in the remote Gittelde near the Harz Mountains. Through unnoticed meetings - after three previous births - von Trott gave birth to another seven children, whose fatherhood was attributed to Henry II. At the Reichstag in Regensburg in 1542 this relationship was made public by Heinrich's opponents. For this reason he was occasionally ridiculed as "wild Heinz von Wolfenbüttel".

Equipped with the possession of the Kirchberg manor near Seesen , these "natural" children received the imperial nobility status through an imperial letter of nobility with the name "von Kirchberg".

After Heinrich II's eldest sons from his first marriage, Karl Viktor and Philipp Magnus, both died in 1553, his son Julius was the actually predetermined successor in the government. However, the father did not consider this to be suitable, and he hoped for a parent from his second marriage to the Polish princess. When this marriage remained childless, however, Heinrich II contemplated choosing his illegitimate son Eitel Heinrich von Kirchberg as his successor after prior authorization from the Pope . But Eitel Heinrich refused the succession to the dignity of prince offered by his father. So Julius remained the hereditary prince, and when he had succeeded his father after his death, he gave his half-brother Eitel Heinrich high credit for his previous voluntary renunciation. In 1584 Eitel Heinrich commanded a mercenary army in the battle of the Agger .