Bad Gandersheim is a spa town in the district of Northeim , Lower Saxony (Germany). The city, whose name Bad refers to its saltwater spa , lies west of the Harz Mountains . The city is also called "Roswithastadt" after the poet Roswitha von Gandersheim .

The town of Bad Gandersheim lies between the Leinebergland , Weserbergland and Harz foreland in the valley of the Gande river , into which the Eterna flows in the urban area. In the north lies the Heber ridge . The urban area is predominantly mountainous. The Harz begins about ten kilometers east of the city , five kilometers west is the Leinetal .

In addition to the core city, Bad Gandersheim consists of the following districts:

The former Gandersheim Castle , today the seat of the local court

Merian engraving around 1654 by Gandersheim

The Gandersheim Abbey was founded in 852 by Duke of Saxony Liudolf, who gave the Liudolfinger its name . It was a women's monastery that had been directly imperial since 877 . In earlier times there was already a merchant settlement (the Wiek ) on the site of today's Georgskirche . The city experienced a heyday under the Liudolfingers in the 10th century. The poet Roswitha von Gandersheim also lived at this time . Market, coin and customs law was granted to her in 990 by the Empress Theophanu in the name of her (underage) son Otto III. awarded.

Around 1300 the ducal-Braunschweig castle of Gandersheim was built as a counterpoint to the monastery. In 1329 the citizens of the city finally bought themselves free from their dependence on the monastery (Magna Charta Gandershemensis). The three power centers of the pen, town and castle were decisive for Gandersheim in the future.

In 1568, at the instigation of Duke Julius of Braunschweig, the Reformation was also carried out for the monastery. The monastery flourished again in the Baroque period under the Abbess Elisabeth von Sachsen-Meiningen (Abbess from 1713 to 1766). With the Reichsdeputationshauptschluss the monastery lost its independence in 1803 and was completely dissolved in 1810 after the death of the last abbess. The fortune went to the Kingdom of Westphalia . The monastery initially existed as a Protestant women's monastery, the territories fell to the Duke of Braunschweig .

City fires occurred in 1580, when the then city church of St. Mauritius was destroyed, and in 1833. In addition, there was considerable devastation during the Thirty Years War , so that only remnants of the original city fortifications remain.

In 1833 the district of Gandersheim was founded and in 1977 it was essentially divided between the districts of Goslar and Northeim . In 1878 the first brine bath was founded in Gandersheim and the spa business started slowly. After the First World War , professional tourism advertising began and from 1932 the town was allowed to call itself “Bad” Gandersheim. For the development of the postal system in Gandersheim, see: Braunschweig-Göttingen postal route

In 1944, the Bad Gandersheim concentration camp was built in the former Brunshausen monastery near Gandersheim as a satellite camp of the Buchenwald concentration camp , in which hundreds of prisoners had to live under inhumane conditions. They had to do forced labor in the aircraft factory belonging to the Heinkel factory and in a nearby quarry. The French writer Robert Antelme , who was interned there, vividly describes life and death in the Gandersheim camp in his work Das Menschengeschlecht . In addition, there was the Gandersheimer Flachsröste GmbH company in Bad Gandersheim, which was founded in 1935 as a branch of Deutsche Flachsbau GmbH Berlin. The branch soon developed into the largest flax roaster in the German Empire. With the processing of raw materials into yarns and fabrics that were to be used for parachutes, among other things, the facility in the Nazi war economy was one of the war-important companies that had to be emphatically supported in terms of labor. The Gandersheimer Flachsröste had its own warehouse for slave labor on Karl-Dinklage-Strasse in the Gandersheim city area. By May 1940 at the latest, 40 Polish women, who had meanwhile lived in the Meierhof camp, were deployed to the Flachsröste, and later 20 Russian women and 15 Ukrainian women. They lived in the local dairy, as the forced labor camp had not yet been set up at that time or was occupied by the accommodation of prisoners of war. Registration cards for the period between 1940 and 1945 testify to at least 51 Eastern European "civilian workers" who were employed in the flax roasting.

After the Second World War , numerous expellees , mainly from Silesia, were settled in the urban area. Therefore, in the 1950s, a new Catholic church was built in the city center. The adjoining former domain courtyard of the monastery was completely rebuilt and developed into a central bus station. On its southern side, the Martin Luther House was built for the Protestant collegiate community on the site of the former cloister of the monastery as the modern center of the church community.

In the 1960s, 1970s and 1980s in particular, the spa business in the city of Bad Gandersheim was significantly expanded. Numerous new spa facilities with brine drinking pavilion, water treading pool, music pavilion, small golf course and natural hiking trails have been created. In addition, a new health resort and half a dozen health clinics were built on the edge of the park. The health resort became the most important economic factor in the city and the surrounding area.

In the 1990s, the entire city center was redesigned: Since then, there has been a small pedestrian zone on the market and next to the collegiate church. In addition, Moritzstrasse - the city's main shopping street - was traffic-calmed; a number of buildings in the historic town center were renovated. There were also two nature trails in the north of Bad Gandersheim, the mountain spa park on a steep hillside, and a path through a wetland with a wooden observation tower.

The inner-city park Plangarten has recently been redesigned with a spacious playground, among other things. 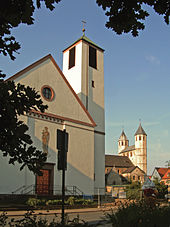 Catholic church, in the back Protestant collegiate church

In the Middle Ages there were five monasteries in and around Gandersheim: gandersheim abbey , monastery Brunshausen , Kloster Clus , Marie monastery and a convent of Franciscan .

The majority of the city's residents have been Evangelical- Lutheran since the Reformation . Your Protestant parish church has been the collegiate church since secularization in 1810 .

In 1953, the new Catholic Church of the Assumption of Mary was built in the immediate vicinity of the collegiate church, to which 1,800 parishioners belong today (including the surrounding villages).

Since 1987 , the Bad Gandersheim faith center has been located on the Osterberg in the barracks building of the former customs school Bad Gandersheim, which was used from 1936 to 1945 as the motorsport school of the National Socialist Motor Corps (NSKK) . It describes itself as a cross-denominational work of faith and can be assigned to the charismatic-evangelical direction.

The New Apostolic Church at Neuen Straße 32 was closed in 2007.

The Bad Gandersheim Council consists of 20 members. After the local elections on September 11, 2016 , the seats are divided among the individual parties and lists as follows:

The current incumbent mayor has been Franziska Schwarz (SPD) since 2014.

Blazon : “In gold a blue helmet with hanging black ribbons, on this two black horns covered with green peacock feathers; below a heraldic lily. ”Shortly after 1300, the first city seal, which can be traced back to 1335, was created. Since 1906, the coat of arms has again corresponded to the image in the shield of the first city seal. Later seals leave out the lily, which was considered a symbol of the prince monastery. The helmets and crests refer to the dukes of Braunschweig-Lüneburg . In the town seals of the 18th century, a stinging helmet with individual peacock feathers and toothed sickles can be seen. Furthermore, a crowned "G" was used in the seals of the city during this time as well as in the 19th century. 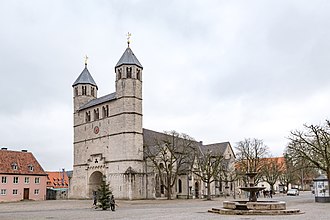 Bad Gandersheim is on the Deutsche Fachwerkstrasse . 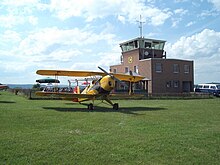 As a health resort, the city has three health clinics with almost 600 beds ( Paracelsus group ). The Roswitha Klinik specializes in psychosomatics , the Klinik an der Gande on follow-up treatment (AHB) for orthopedic interventions as well as herniated discs and osteoporosis, while the Klinik am See focuses on follow-up treatment on oncological diseases. Furthermore, the city has a hospital primary care ( Heliosklinik ) - including an internal ward, surgical ward, gynecology, obstetrics, intensive care unit with six to seven beds, outpatient clinics, surgery, computed tomography , ambulance base and location of a rescue station , each with a RTW , KTW and NEF . Above all, the departments for orthopedics and obstetrics are known far beyond the city limits.

The Gandersheimer Kreisblatt is published for the city of Bad Gandersheim . This local newspaper , which appears daily (except on Sundays) , also reports on events in the municipalities of Kreiensen (district of Einbeck since 2013 ) and Kalefeld , which are adjacent to the urban area .

Bad Gandersheim has a primary school with two branches in the districts of Dankelsheim and Altgandersheim , the Free School Heckenbeck , a secondary school , a special school with a focus on learning and the Roswitha grammar school . In 1923, the Jewish reform pedagogue Max Bondy and his wife Gertrud Bondy founded the school community in Gandersheim . In 1929 the facility moved to Gut Marienau in the municipality of Dahlem , where it still exists today as the Marienau Rural Education Home .

Municipalities in the district of Northeim