A health resort is characterized by the presence of natural remedies from the soil, water or the climate or the possibility of physiotherapy, e.g. B. after Kneipp .

Health resorts are an important economic factor worldwide. In Germany alone , around 400,000 people directly and indirectly employed in health resorts generate an annual turnover of over 30 billion euros (2013). 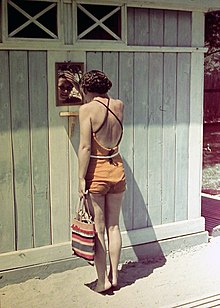 In 1581 the balneological work Neuw Wasserschatz by the botanist and physician Tabernaemontanus was published , who is therefore considered the founder of German health resorts such as Bad Schwalbach . In 1632 Johann Nopp published early medical bathing rules in Aachen in his work Aacher Chronick, which is a short, historical description of all antiques and stories worth remembering, as well as privileges and statutes added to sampt .

The first modern bathing or health resorts emerged in the 18th century in Spa in Belgium and in England for the upper and middle classes . The physician Richard Russell (1687–1759), who studied the health benefits of seawater and was one of the pioneers of thalassotherapy , had a decisive influence on British bathing culture . Examples from this period are Bath , Brighton , Buxton and Harrogate .

In Japan, hot springs ( onsen ) were used for bathing from an early age ; After the country opened up in the 19th century, health resorts that are popular tourist destinations today, such as Beppu , were established in some places with these springs based on the western model .

The term “Weltbad” became established for the historical fashion and spa baths that were internationally leading in the 19th and early 20th centuries. They differ from other health resorts mainly in the following criteria:

Several of these traditional spas are striving to be listed as UNESCO World Heritage Sites under the name Great Spas of Europe .

In Germany the following predicates will be awarded:

Recreation areas , seaside resorts and tourist communities are not health resorts, but are also recognized by the state.

In Germany, it is recognized as a health resort (also known as “rating”) by the responsible ministry in the respective federal state. The basis is regularly a law (“Kurortegesetz”) or (in Bavaria, Lower Saxony, Saxony-Anhalt and Schleswig-Holstein) an ordinance , possibly supplemented by decrees. Recognition bases exist in all German territorial states. The recognition can refer to a municipality or a part of the municipality.

All territorial states refer to the definitions - quality standards for the rating of health resorts, recreation areas and healing fountains of the German Health Baths Association. V. and the German Tourism Association e. V. implicitly or explicitly in the predication.

In most federal states, state recognition as a health resort or recreation area is a prerequisite for collecting the health resort tax ( visitor's tax ) and tourism tax .

The therapeutic measures during a cure, for example baths, massages or inhalations , are called cure products . Many health resorts, in which the therapeutic products are offered in health resorts or spa hotels, also have their own health resort store . These houses are or were usually operated by the municipalities or the federal states in order to use therapeutic agents in a controlled manner and to establish a corresponding standard on site. One example of this is the Kurmittelhaus in Bad Reichenhall , which was built in 1928 and still exists today.

Health resorts are centers of excellence in both medical and therapeutic care. In addition to the usual medical training , the spa doctors have in-depth knowledge of local natural healing methods (local remedies ) and have appropriate experience with these applications. The therapists are usually specialized. Thus, under certain circumstances, greater healing success can be achieved during the spa stays than at home. In addition, the spa infrastructure is usually designed so that guests can do a lot for their health.