This article deals with the tributary of the Main near Gemünden; Saale (disambiguation) lists other rivers with the same basic word in their name , including the Elbe tributary Saale , which has its source in Upper Franconia .

The northern source of the Franconian Saale near Alsleben

Bronze plaque at the source of the northern source stream

Source of the Saale near Obereßfeld 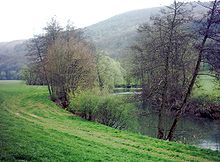 The Franconian Saale near Morlesau

The Franconian Saale is an approximately 140 km long, northeastern and right tributary of the Main in the Bavarian Lower Franconia . It arises in Grabfeld near Bad Königshofen from two source streams and flows into the Main near Gemünden ( FS-km  211.0).

First mention and interpretation of the name

The Franconian Saale was mentioned for the first time in 777 under the names "Sala" and "Salu" in a Fulda document book. These terms with the general meaning as flowing water can already be found in the Greek geographer Strabo (about 63 BC to 23 AD).

The Franconian Saale arises in the Grabfeld east and south-east of Bad Königshofen from two source streams:

From the confluence of the two source streams not far south-east of Bad Königshofen, the Franconian Saale flows mostly in a south-westerly direction along the south-eastern edge of the Rhön , including via Bad Neustadt , Bad Bocklet , Bad Kissingen , Hammelburg and Gräfendorf , where you can see the Schondra from the right and near Gemünden as largest tributary that flows into Sinn . Immediately after flowing through Gemünden , coming from the northeast, it reaches the Main with an average water flow of around 24 m³ / s. It is its largest right tributary.

The river system of the Franconian Saale is characterized in particular by eight main tributaries, only one of which joins from the left. 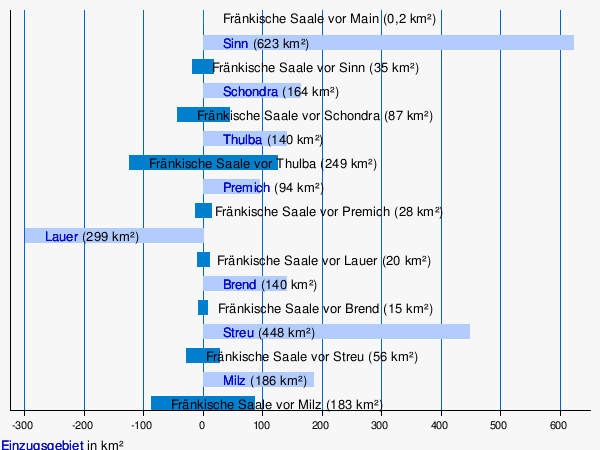 The following tributaries of the Franconian Saale have a catchment area of ​​at least 10 km²:

A more comprehensive list, which also includes small tributaries, can be found in the list of tributaries of the Franconian Saale .

The Sinn flows into the Franconian Saale

Catchment area of ​​the Franconian Saale

From a hydrological point of view, the Franconian Saale is not the main strand of the river system named after it on its upper reaches. At the inflow of the Spleen on the upper course near Saal an der Saale, it exceeds the course of the Franconian Saale to that point according to two of the three usual criteria, namely discharge and catchment area, which is, however, noticeably longer.

The same situation occurs further downwards at the inflow of the Streu near Heustreu, which also brings more water from a larger catchment area than the Franconian Saale to there - and is even longer, at least if you don't use the Franconian Saale, according to the above “Corrective”, starts at the milk source.

Very shortly before the confluence in Gemünden am Main, another important tributary flows into the Sinn, which is now both poorer in water, less inland and also shorter than the Saale up to this point, but increases its flow by more than 40%.

A map from 1621 saw the Streu - with the inscription Straÿ Flu ('Streu-Fluss') as far as Gemünden - as the main branch of the river system.

Cities and municipalities on the Franconian Saale

The following cities and communities are located on the Franconian Saale:

Bad Kissingen , Westheim, Diebach , Gräfendorf , Wolfsmünster and Gemünden are particularly affected by regular flooding in the town centers near the Saalen , as the high water marks on historic buildings attest. Bad Kissingen often experiences floods several times in a year. However, flood protection measures have been implemented in the historic city center by building weirs and protective barriers.

For centuries, the Franconian Saale was redesigned by people in the interest of more intensive use of the Saale valley. The course of the river was straightened by piercing meander arches. The width of the river has been standardized over long stretches. Alluvial forests were cleared and the banks fortified, water mills , small hydroelectric power stations and weirs were built, and former flood plains were built.

All of this has seriously affected the ecological functioning of the river. Bank construction and weirs change the speed of flow and patency, destroy the unity of river and floodplain and encourage devastating floods . For a number of years, projects by the Schweinfurt Water Management Office have been trying to restore some of the old ecological function of the Franconian Saale by dismantling bank reinforcements, bypassing weirs and reforesting alluvial forests.

The confluence of the two source streams at Untereßfeld

Up until the 14th century, the Franconian Saale and its tributaries carried significantly more water than today, because at that time the heights of their tributaries such as the Rhön and Grabfeld were denser with deciduous forests and the humus soils could release rain and soil water more evenly. The normal water level of the Saale corresponded to an average flood of today, so that the shore landscapes were wet to swampy. Except for towpaths , the Saale meadows and meadows were hardly passable. It was impossible to use carts or armored riders outside of fixed routes. To make matters worse, the river could not be crossed at any point. There were only a few bridges and fords. The fact that the Franconian Saale must have been navigable as early as 790 is proven by Einhard's entry in the Reichsannalen from that year. As the writer of Charlemagne noted, “(...) the king (Karl) went by ship up the Rhine to the palace that he had built for salt in Germany on the Franconian Saale and then returned on the same river back to the valley in Worms ... “. As early as 777, Charlemagne had transferred his Saale-Franconian property Hammelburg and the entire area to the Fulda Monastery , which made it possible to prevent shipping between places above and below the city or to levy customs duties at the ford near Hammelburg .

There have been steam ships on the Saale since 1878. The Saaleschifffahrt GmbH still owns two ships called "Dampferle" in dialect, which run every 40 minutes during the week and every 20 minutes at the weekend in Bad Kissingen between the rose garden and the saltworks . The names of the ships powered by diesel engines today are Kissingen (built in 1926) and Saline (built in 1964).

Bridges over the Saale

Pedestrian bridge over the young Saale near Untereßfeld 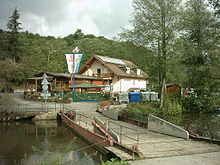 Pontoon bridge over the Franconian Saale at the Roßmühle 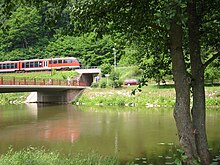 Saale bridge near Michelau on the Saale

The Saale Bridge near Hammelburg

Until the Saale bridge was built in 1121, only one ford made it possible to cross the Franconian Saale at the gates of Hammelburg. The heavily fortified city, which belongs to the area of ​​the Fulda monastery, controlled the important highway running there from Italy via Augsburg , Swabia , Würzburg , to Kassel, as well as to the Netherlands and the North Sea ports . In the middle of the five-arched stone bridge stood a defensive tower as an outpost . Another bulwark, the Saaleck Castle towering on the left bank of the Saale , also belonging to Hammelburg, protected the transition from the south. The troops of Würzburg Prince-Bishop Hermann I von Lobdeburg tried to take Saaleck, the bridge and the city several times between 1224 and 1265. Further attempts by his successors also failed. This dispute ended only after a good two hundred years through a mandate from Emperor Maximilian and finally through a decision of the Imperial Chamber Court of 1552 in favor of Fulda. The regulations lasted until Hammelburg was incorporated into the Kingdom of Bavaria in 1816. Then the gate tower on the Saale bridge was dragged.

In 1945, at the end of the Second World War , German pioneers blew up parts of the Romanesque arch bridge. Although the damage interrupted traffic, it was not so severe that the bridge could not have been restored. Instead, the remains of the historic building were removed and a new reinforced concrete structure was built in 1952 . Since then, the successor bridge in front of Hammelburg swings in an elegant curve over the Saale.

View over the Trimburg into the Saale valley

There are some interesting castles and fortresses on the Saale:

Weir at the Roßmühle with fish ladder

Numerous weirs can be found in the course of the Franconian Saale, originally built to drive water mills, today some are used to generate electricity. All weirs are provided with fish ladders:

Along the lower reaches of the Fränkischen Saale the wrong Saale Talbahn of Bad Kissingen about Hammelburg and Graefendorf to Gemünden. On the upper reaches there was the Grabfeldbahn until 1997 , which connected Bad Neustadt with Bad Königshofen.

Despite the many weirs, the Franconian Saale is popular with canoeists as a slowly flowing and dreamy hiking river. It can be used from Bad Neustadt to Gemünden with few restrictions. There is a night driving ban from March 1 to July 31 from 6:00 p.m. to 7:00 a.m., otherwise from 9:00 p.m. to 7:00 a.m. Boats may have a maximum of four places, be no longer than 6.00 meters and no wider than 1.10 meters. Rafting , rafting and the coupling of boats are not allowed. There is an obligation to notify for organized commercial boat events. With a few exceptions, the weirs are not passable and have to be moved.