This article describes Bundesstraße 19 in Germany. For the street of the same name in Austria see Tullner Straße .

The federal road 19 (abbreviation: B 19 ) leads, starting at Eisenach in the west of Thuringia , across southern Thuringia and Franconia to the southeast to Baden-Württemberg and over the Swabian Alb back to Bavaria , through the Bavarian Upper Swabia and the Allgäu , where it is in the Allgäu Alps ends on the Austrian border.

Today's federal highway 19 was expanded between Meiningen and Würzburg to Chaussee Würzburg-Meiningen as early as 1780 . In dead straight sections that are still preserved today, it led through the hill country to the west past the former imperial city of Schweinfurt .

Today's federal highway 19 crosses numerous formerly independent countries in which the street names were very different. In the Electorate of Hesse , which was owned by the Schmalkalden exclave , the street, which was classified as first-class main street in 1831, was called Meiningensche Straße . The Bavarian state roads were numbered according to their starting point: State road No. 141: Ulm – Kempten – Vils and State road No. 149: Würzburg – Werneck – Meiningen.

Fernverkehrsstraße 19 (FVS 19), established in 1932 and renamed Reichsstraße 19 (R 19) in 1934, led, like today's federal highway, from Eisenach to the Kleiner Walsertal . The only deviation from today's route was that the Reichsstraße ran through Bad Kissingen until around 1937 . The detour via Bad Kissingen was assigned to Reichsstrasse 286 and 287 from 1937 . 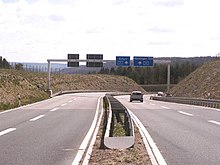 The B19 joins the BAB 71 at AS Meiningen-Nord

Since the laying of the federal freeway 4 on January 9, 2010, federal highway 19 begins in Krauthausen near Eisenach , directly at the Eisenach-West junction of the A 4 and uses the former route of this freeway as a motor vehicle . The B 19 runs from Eisenach-Weststadt , together with the B 84 to the Eisenach-Oststadt junction . There the two federal roads leave the old A4 route, which continues as federal road 88 to Ilmenau .

Now, as before, the B 19 crosses the downtown area of ​​Eisenach in a southerly direction and leads past the famous Wartburg into the Thuringian Forest Nature Park . After 22 kilometers it meets the upper reaches of the Werra . From here it is led to Meiningen (52 km), including the bypasses that have been created since the 1990s . The prepared route of the never completed Reichsautobahn route 85 is used between Barchfeld and Niederschmalkalden . In Meiningen, since the end of 2005, it has turned onto the former federal highway 280 to the Meiningen-Nord junction of the newly built federal motorway 71 .

After the completion of the A 71, the section of the B 19 between Meiningen and Werneck was split into state, state and district roads and replaced by the A 71 and, furthermore, by the federal motorway 70 (see: Changes made ).

Course of the 2007 stepped section

After the fall of the Wall in 1991, the Henneberg bypass was built before the graduation . Even before the downgrading, the B 19 in Mellrichstadt was relocated internally in the 1990s. In particular, the through-roads from Mellrichstadt to Bad Neustadt an der Saale were very narrow, which is why several bypasses such as Oberstreu and Mittelstreu were built in the 1990s and 2000s . In Bad Neustadt an der Saale, the B 19 was expanded into a city bypass in the 1970s. Until the expansion near Münnerstadt , the B19 led over the so-called old "Schindbergstrasse". It was not until the 1970s that the city was expanded to the southeast.

The area of ​​the former B 19 between the confluence of the B 287 near Nüdlingen and the “ Schwarze Pfütze ” inn near Rottershausen is still known today by the local population as the “Long Ship”, as the former B 19 runs as dead straight and expanded here for several kilometers this section of the route has repeatedly led to fatal road accidents caused by speeders in the past. A supply line operated by the US Army, which was stationed near Reiterswiesen near Bad Kissingen, also crossed there until the 1980s. At Rottershausen there was a former ammunition depot of the German Wehrmacht , which was still used by the US Army after 1945. The connecting road of the US Army led there and repeatedly caused accidents at the intersection with the B19. After the B19 was downgraded to a county road and the American armed forces had finally withdrawn for years, this section of the route is likely to have been defused for years.

Until the 1960s - construction of a bypass - the B 19 ran through the towns of Poppenhausen (intersection with B 286) and Kronungen (district of Schweinfurt). Schweinfurt was connected to the B 19 near Niederwerrn by an old connection and later by a new four-lane construction of the B 303. The through-town of Geldersheim was very narrow and led directly past the church with two curves.

Only at the BAB 70 exit Werneck does the actual B 19 begin again today. In the local area of ​​Werneck, the B 19 was shared with the B 26 coming from Karlstadt towards Schweinfurt. Route B 19 - B 26 still represents the shortest connection from the southern edge of the Rhön (Bad Neustadt / Saale) to the Main (Karlstadt). Werneck has always been a traffic problem, which is why there has been a bypass for several years.

On the historic bridge, the B 19 crosses the Jagst in Hohebach

Coming from the Werneck exit of the A 70, it now runs between the federal autobahn 7 ( Flensburg to Allgäu ) and the Main through the Franconian heartland to Würzburg (158 km). See also Stadtring Süd (Würzburg) . After Würzburg it crosses the federal highway 3 ( Netherlands - Passau ) and meets the state border with Baden-Württemberg at kilometer 189 . In Bad Mergentheim the road crosses the Taubertal and leads as the “ Swabian Poet Street ” to Künzelsau in the Kocher valley . The ascent to the Hohenlohe level was extended in 2010 to the new western bypass of Gaisbach . The traffic was already transferred to the bypass on August 16, the official clearance act was rescheduled on September 6. From the federal autobahn 6 , the B 19 runs together with the federal highway 14 through the salt and coin town ( Heller ) Schwäbisch Hall (257 km) to separate again to the west. In order to relieve the city of through traffic on both federal highways, the “small western bypass” was built by 2012. This seven-kilometer bypass running northwest of the city over the Hohenlohe plain is not created by the federal government, but as K 2576 by the district.

We continue along the Kocher to the Swabian Alb through Aalen (317 km) and Heidenheim (339 km). Bolheim is bypassed in the east, after four kilometers a traffic light regulates the traffic outside the town and the former street layout is replaced by a new section with a 205 m long tunnel that connects the Herbrechtingen , which has been split into two parts, with a small city park. After a further four kilometers, the federal highway 19 will now be replaced by the federal highway 7 for seventeen kilometers between the Giengen and Langenau exits . After a further fifteen kilometers, the road reaches Ulm at route kilometer 379. Now federal road 19 ends temporarily after it has crossed the Danube to Neu-Ulm . Here the federal highway 19 has also returned to Bavaria .

Since the construction of the federal motorway 7, the old federal road 19 has been downgraded to the state road 2031 and as such runs along the river Iller to Memmingen (445 km) and on to Kempten (Allgäu) (480 km). Here the federal highway 7 turns to the east and the federal highway 19 is again as before the federal highway. From here it leads south into the Allgäu Alps. Via Immenstadt (501 km), Sonthofen (508 km) and past Oberstdorf (518 km), federal road 19 leads another six kilometers to the Austrian border at the Walserschanz. As the Austrian Kleinwalsertalstraße (B 201) it continues through the Kleinwalsertal , which is the German customs connection area , and ends there in Baad .

The total length of federal highway 19 is 524 kilometers, from which, however, the distance on which it is upgraded to a federal freeway (17 km) or downgraded to a state road (around 101 km) would have to be deducted.

In the city of Eisenach, a former section of the Autobahn 4 (former junction Eisenach-West to Eisenach-Ost) belongs to the B 19. Between Barchfeld and Meiningen, the route is currently being expanded with cross-country connections. For this purpose, the route of the formerly under construction Reichsautobahn - route 85 , which was planned to connect Eisenach with Bamberg , is used as far as possible . The bypasses of Barchfeld, Breitungen, Fambach , Niederschmalkalden with the viaduct over the Schmalkalde and Schwallungen , completed in 2013, have already been completed. From Wasungen to Walldorf (Meiningen) north of Meiningen, the B 19 has already been expanded to four lanes. The eastern bypass of Wasungen is being planned. For this purpose, the Maienluft castle ruins are to be tunneled under.

In the Würzburg area, the B 19 between the A 7 and A 3 motorways is almost completely expanded to four lanes. It was planned to expand this section of the route as the A 713 city ​​motorway , but these plans were discarded. Due to the lack of a western bypass for Würzburg ( A 81 - Würzburg-West motorway triangle and A 70 - Schweinfurt / Werneck motorway junction ), this section of the route is often used as a shortcut to the Biebelried motorway junction . In the meantime, through traffic for trucks on the B 19 between the two motorways is prohibited. Between the Würzburg-Estenfeld motorway junction and the B 19 exit Lengfeld, the main road is a motor vehicle with no speed restrictions on both sides . In the further course to the city limits of Würzburg it is closed to cyclists and mopeds. The federal road between Waltenhofen and Sonthofen has also been expanded to four lanes. This section was planned earlier than the A 985 .

In 2009, the new construction of the federal highway 19 as a four-lane motorway between Waltenhofen and Immenstadt was completed. The course of the road from Thanners to Immenstadt was relocated to the eastern side of the Illers with a 254 m long bridge. The former federal highway 19 in the Immenstadt municipality west of the Iller was downgraded to a district road (OA 5) . A section of the route between Immenstadt and Sonthofen had been expanded to four lanes since 1968.

When the A 4 was relocated to the north in the Eisenach area at the beginning of 2010, the B 19 was extended by a section of the previous A 4.