The federal highway 239 (abbreviation: B 239 ) is after the Ostwestfalenmagistrale , the A33 , the most important north-south connection in Ostwestfalen-Lippe .

The top of the Horst Höhe pass over the Wiehen Mountains

The B 239 starts in the south in Höxter , runs through Marienmünster , Steinheim (Westphalia) , Horn-Bad Meinberg , Detmold and Lage to Bad Salzuflen . It crosses the A 2 between Bad Salzuflen and Herford . The national road bypasses Herford and leads to crossing of the railway track Hamm-Minden about Hiddenhausen according Kirchlengern where they on the Else Talbrücke the Löhne-Rheine railway crossing and before the A 30 abuts. Then it leads past Hüllhorst to Lübbecke . At Espelkamp it crosses state road 770 . There are bypasses for the cities of Espelkamp and Rahden . Then it continues north to leave Ostwestfalen-Lippe and North Rhine-Westphalia, lead through Wagenfeld in Lower Saxony and join the B 214 shortly before Diepholz near Rehden . 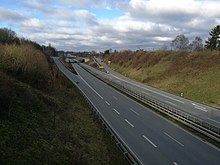 At least between the A 30 junction near Kirchlengern and the end of the now no longer pursued Detmold southern bypass, where it would have flowed into the also planned northern A 5 , a motorway cross-section was planned for the B 239. This expansion was in part even stipulated in the Federal Transport Infrastructure Plan from 1992. So far, however, only a section of the Herford bypass in the west of the city and a clover leaf junction with the A 2 at the Herford / Bad Salzuflen junction have been implemented. The level crossings have now been replaced by junctions. In the spring of 2008 the sidewalks, cycle paths and driveways in the Detmold- Remmighausen area were renewed.

Meanwhile, the B 239 no longer runs through Detmold's city ​​center, but instead runs past Detmold on the Nordring bypass . The "old" B 239 was downgraded to the L 758 in the downtown area of ​​Detmold. Since the north ring showed considerable damage to the road surface, it was renewed in sections from summer 2010 and provided with three lanes ( 2 + 1 ) in two sections .

Special about the route

Between Steinheim and the Schieder-Schwalenberg district of Wöbbel , the B 239 runs over the federal road 252 .

When leaving the North German Plain , coming from Diepholz, the road from Lübbecke is characterized by an unusually long ascent to the ridge of the Wiehengebirge for north-west German conditions . Behind this a completely different landscape prevails, which is characterized by the low mountain range .

South of Herford , the B 239 was to be upgraded to three lanes (2 + 1) as far as the Detmolder Nordring. There were estimates that these plans would probably not be implemented for the time being, as the main road between Bad Salzuflen and Lage was renovated in sections in September 2007. The road surface was renewed and the original road markings reapplied.

The preliminary draft has been in progress since 2013. In the meantime, in the spring of 2016, the expansion of essential sections is presented as urgent, in the draft bill for the Federal Transport Infrastructure Plan 2030 , accordingly with a planned implementation by 2030. The BUND criticizes, among other things, the expansion planning B 239 Lage - Bad Salzuflen as "ecologically highly questionable plans" and the location bypassing location as a "particularly blatant example of total bad planning".

In the north of Herford and in Hiddenhausen - Schweicheln - between the intersection with the state road 860 towards Bad Oeynhausen and the A 30 connection at Kirchlengern - it should also be expanded to three lanes. The last-mentioned section, also known as the Werre Valley motorway , however, creates considerable resistance among the population. Not least because it along its entire length through the nature reserve of Werreaue to be performed. In addition, an effective relief of Schweicheln from noise is doubted because of the higher speeds driven and the location in the "resonance body" Werretal.

A further expansion will possibly result from the planned relocation of federal highway 239 in the area where the Wiehengebirge crosses by two kilometers to the east. The Lübbecke bypass project is listed in the Federal Transport Infrastructure Plan as a new project with planning rights "WB" (additional requirements). The new route, which probably or mostly tunneled even under the highest part of the Wiehengebirge in the area of Heidbrinks is to run will be 5.3 km long and will stand at present cost 68.5 million euros. When the exact expansion will take place has not yet been determined, as the project has only enjoyed a subordinate priority in the transport plan. In any case, implementation by 2020 is conceivable.

In the Hiddenhausen - Schweicheln area , the B 239 runs under the Herford - Löhne and Herford - Kirchlengern railway lines under a bridge. With a clearance height of 3.90 m, this is too low for some trucks. That is why many trucks between Herford and the A 30 motorway use the 545 state road, which leads from the Bünde-Ost / Hiddenhausen junction via Hiddenhausen- Eilshausen to Herford. There are no bridges on this alternative route.