Nature reserve ( NSG ) is a protection category of area-related nature protection according to the Federal Nature Conservation Act (BNatSchG).

Section 23 of the BNatSchG reads as follows:

(2) All actions that can lead to the destruction, damage or alteration of the nature reserve or its components or to a lasting disturbance are prohibited in accordance with more detailed provisions. As far as the protection purpose allows, nature reserves can be made accessible to the general public.

The law prohibits the use of the designation “nature reserve” or those that are confusingly similar to areas other than those protected by law.

As a rule, nature reserves are legally identified by publication of the Protected Area Ordinance and the delimitation (usually in map form) in an official bulletin by decree or legal ordinance . In the countries where the landscape plan as a legally binding statute is decided (usually it is only non-binding expert opinion) they can with the force of law are legally the particular landscape plan. Since the designation of the protected area involves an encroachment on the rights of third parties, those affected must be given the opportunity to comment beforehand. The designation of a nature reserve is a legal act and as such can be challenged in court, but only by those affected. The authority may a temporary before the expulsion of the protected area development freeze imposed so that can not be quickly created prior legal force facts. 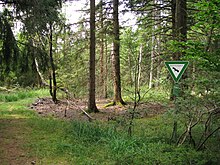 The status of a nature reserve is (with the exception of the rare, large-scale national parks, where these categories can overlap) as a rule the strictest statutory area protection category (the special case Natura 2000 is not considered here). The areas and land within the nature reserve are usually privately owned. Their right to their property is not revoked by the expulsion. However, it is ensured by case law that the owners have to accept restrictions on the use and usability of their properties. The legal basis for this is the social obligation of property anchored in the Basic Law . Which restrictions apply in detail is often very controversial in practice. The nature conservation authority is required to avoid “ unreasonable ” hardship , d. H. all restrictions must result from the protective purpose as necessary. If the usability of a property is so severely restricted by the Protected Area Ordinance that the owner can no longer use it and thus becomes worthless ( "expropriation-like" intervention ), he can demand public takeover (at market value). Legitimately exercised uses within a newly designated conservation area have grandfathered . However, they may no longer be intensified or expanded. In order to avoid conflicts with the landowners, the nature conservation authority tries in many cases to publicly purchase the land. But also with public users, z. B. Forest administrations, conflicts of use within nature reserves are the order of the day.

In addition to real estate, other rights and usage options within a nature reserve may be restricted or canceled. This concerns z. B. Hunting and fishing rights , access rights , etc. v. m. The same applies here: The text of the Protected Area Ordinance is decisive for the restriction. Corresponding rights do not automatically expire. Most of the time, recreational use in nature reserves is restricted by the use of paths . This means that they can still be entered, but only on marked paths.

As a rule, the nature conservation authority tries to control the development of a nature reserve in order to be able to achieve the protection goals. For this purpose, special expert reports are sometimes created, usually called “care plan”, “care and development plan”, “management plan” or the like. These represent the official objectives in the area. They have no legal force vis-à-vis third parties (e.g. landowners). In many nature reserves there are considerable deficits in enforcement because the authorities are unable to enforce or control the prohibitions and requirements (e.g. due to a lack of staff). The status of a nature reserve does not automatically ensure that the protection goals in the area are achieved. In practice, the condition of numerous nature reserves has demonstrably deteriorated after their designation.

Since nature reserves otherwise restrict legitimate uses, they must be marked in the area. Only then can z. B. a walker know that he is in a protected area and he z. B. must not leave the path. For historical reasons, this marking is not uniform in Germany.

From 1954 to 1994, nature reserves were uniformly marked in West Germany by green, triangular signs with the symbol of a flying sea ​​eagle in a white field . The design of these signs was left to the individual countries that are responsible for environmental policy. To this day, many signs still show deviating details in the logo and typography. The black and white aerial drawing of a soaring sea eagle goes back to the painter and graphic artist Hans Troschel (1899–1979), who, as a nature lover, also wrote the book Am See der Milane . The sea eagle was adopted as the symbol of the German heraldic bird . Depending on the quality and design of the logo on the shield, a bald eagle , the heraldic animal of the USA, could also be recognized in some images of the sea eagle .

Also in 1954 a sign was made official in the German Democratic Republic , which showed a logo of a long-eared owl designed by the conservationist Kurt Kretschmann (1914-2007) . In its last version, a graphically modified symbol of the owl on a yellow, trapezoidal shield with an acute-angled end became legally valid on June 1, 1971 in the GDR.

As part of the reunification , the decision of the 42nd Environment Ministers' Conference of 18./19. May 1994 to continue using the owl symbol on the territory of the former GDR. It was also suggested to introduce the symbol of the long-eared owl throughout Germany. This suggestion was taken up by some West German federal states, whereby it remained a state matter how a future owl logo should be designed.

Nature reserves are to be taken into account in the land-use planning and must be represented and taken into account in development plans . One speaks here of a takeover for information . They are binding and cannot, for example, be overcome on the basis of an overriding general good in consideration . However, it is of course possible to abolish nature reserves. In principle, the same procedure applies here as for their expulsion.

As an example of a regulation , the "protection purpose" of the area is given in detail for the nature reserve Oberes Pfefferfließ , Brandenburg .

The nature reserve category was first anchored in the Prussian Field and Forest Police Act in 1920. Other German states followed. The Neandertal near Düsseldorf is considered the first German nature reserve. With the Reich Nature Conservation Act of 1935, there was a state regulation in Germany. In 1936 98 areas were registered as nature reserves. From 1949 onwards, the Reich Nature Conservation Act remained in force in the Federal Republic of Germany, with the exception of Section 24, and the federal states subsequently drew up their own nature conservation laws. In 1976 a framework law to which the nature conservation laws of the federal states had to be adapted was passed.

There are also marine nature reserves in the territorial sea , the connection zone and in the German exclusive economic zone . So far, marine conservation areas with a total area of ​​1,039,200 hectares have been designated in the North and Baltic Seas.

Nature reserves in the GDR 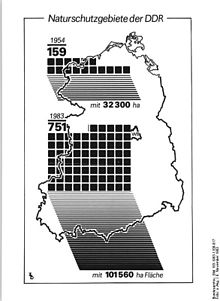 As a rule, nature reserves in the GDR were not used for agriculture (residual areas). The district councils together with the Institute for Landscape Research and Nature Conservation (ILN) have drawn up maintenance and development plans for the areas, referred to here as “treatment guidelines”. At the end of 1969 there were 650 nature reserves in the GDR with a total area of ​​75,500 hectares. At the end of the GDR there were 789 protected areas with an area of ​​109,192 hectares. The proportion of the land area was 0.96 percent (Federal Republic of Germany 1990: 1.38 percent).

In 1990, the proportion of the land area in the western federal states was 1.38 percent. After the accession of the new federal states, the state culture law was superseded and in 2002 a first amendment to the federal nature conservation law came into force,

At the end of 2008 there were 8,413 nature reserves in Germany with a total area of ​​1,271,582 hectares. This corresponds to 3.6% of the area of ​​Germany. The states of Hesse (1.8%) and Rhineland-Palatinate (1.9%) have the lowest areas. The area shares of the "old" and the "new" federal states are comparable. Approx. 60% of all nature reserves are smaller than 50 hectares. In such small areas, according to the experts, the achievement of the protection goals is jeopardized, because negative influences from the surrounding area cannot be sufficiently buffered. The number and size of nature reserves has increased significantly in recent decades. In 1995 there were only 5314 nature reserves in Germany on an area of ​​6845 km². Experts also consider the current extent to be too low to be able to maintain the biodiversity in Germany.

The following table lists the nature reserves according to German countries :

In addition to the nature reserve , the Federal Nature Conservation Act recognizes other protection options that are more or less strict and serve different purposes:

Classification in the IUCN category system

The IUCN International Union for Conservation of Nature and Natural Resources (translated “International Union for the Conservation of Nature and Natural Resources”) has established an international system of categories for protected areas in order to make the classification globally comparable regardless of the national legal system. The German nature reserves are classified in IUCN Category IV (“Biotope / Species Protection Area with Management”).