The Federal Office advises the Ministry on all questions of national and international nature conservation and landscape management, promotes nature conservation projects, supervises research projects and is the licensing authority for the import and export of protected animal and plant species. The Red Lists of Endangered Animal and Plant Species are published at longer intervals . It also performs tasks in the implementation of international species protection, marine nature conservation, the Antarctic Treaty and the Genetic Engineering Act.

Work areas of the BfN

The Federal Office provides the Federal Environment Ministry with scientific decision-making bases and advises it on all technical issues relating to national and international nature conservation. In addition to its national political competence, the Federal Agency for Nature Conservation sees itself as a close cooperation partner of the federal state authorities. It is also about using concepts and methods developed by the BfN - e. B. for landscape planning, species or area protection - to be implemented uniformly and thus comparable. The Federal Agency for Nature Conservation fulfills a further task in connection with international agreements. These include:

The federal program for biological diversity promotes the implementation of the goals of the national biodiversity strategy. Funding will be given to projects that are representative of the state as a whole within the framework of the National Strategy for Biological Diversity or that implement this strategy in a particularly exemplary and scale-setting manner. The funding extends to four funding priorities

Since 2011, funds amounting to 15 million euros have been entered into the federal budget for the federal program for biological diversity .

Since January 2017, the Federal Agency for Nature Conservation, together with the Matthes & Seitz Berlin publishing house, has been awarding the German Prize for Nature Writing , a literature prize endowed with 10,000 euros and a residence grant for the Isle of Vilm . The first prize winner was Marion Poschmann .

As the enforcement authority for the international species protection agreement CITES , the BfN issues permits for the import and export of protected species. In the Exclusive Economic Zone (EEZ) of the North and Baltic Seas - 12 to 200 nautical miles beyond the coastline - the BfN takes on the selection and administration of NATURA 2000 areas ( fauna, flora, habitat and bird protection areas ) and participates in the approval of projects . The project is advertised under the word / figurative trademark Habitat Mare . In the area of agro-genetic engineering , the BfN is involved in the approval of applications for the release and placing on the market of genetically modified plants, animals and microorganisms. 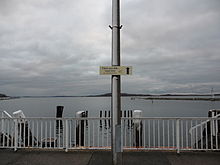 In 2001 the nature detectives project was started with leaflets, stickers and a website. The website offers a small lexicon as well as regular reading and assignment contributions.

The Federal Office is based in the Rüngsdorf district of Bonn (Konstantinstrasse 110). The origin of the property is the former school building of the "Rheinische Obst- und Gartenbauanstalt für Frauen" from 1906 (House I), a new building was added in 1986 (House II) and in 2006 an extension was built (House III) and the entrance area was rebuilt and a conference wing was added.

The Federal Office works at three different locations. The head office is located in the federal city of Bonn, branch offices in Leipzig and on the island of Vilm near Rügen . The International Nature Conservation Academy (INA) is also affiliated to the Vilm branch.

Organizationally, the Federal Office now consists of eight departments, which are grouped into two departments:

The Federal Office is headed by a President: