In 1992 the directive was unanimously adopted by the then member states of the European Union . Together with the Birds Directive , it essentially serves to implement the Bern Convention . One of its main tools is a coherent network of protected areas called Natura 2000 . The areas that specifically protect the rare or threatened species and habitats of common interest named in the Annexes of the Habitats Directive become fauna-flora-habitat areas ( FFH areas ) or special conservation areas ( BEG , English Special Area) of Conservation SAC ), the candidates (until national implementation) Area of ​​Community Importance ( GGB , Site of Community Importance SCI ). 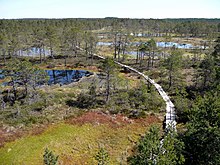 Endangered species such as osprey , golden eagle , eagles , red grouse , black stork and mink can be found in the Estonian Lahemaa National Park 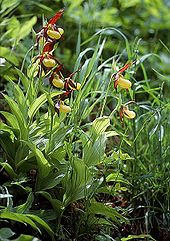 The development of the Habitats Directive was discussed at the European Council in 1988 under the German Presidency on 27./28. June 1988 decided in Hanover. After four years of deliberations in the member states, it came into force by unanimous decision in the European Council and the European Parliament in 1992. The aim of the directive is to secure and protect wild species, their habitats and the Europe-wide networking of these habitats. Networking serves to preserve, (re) establish and develop ecological interrelationships as well as to promote natural expansion and repopulation processes. It is thus the central legal instrument of the European Union in order to implement the commitments made by the member states in 1992 to protect biological diversity ( Biodiversity Convention , CBD, Rio 1992).

Like the EU Birds Directive of 1979, the Habitats Directive also has two main pillars:

One of the central pillars of both directives is the creation of the Natura 2000 network of protected areas . This consists of areas that contain a sufficient proportion of the natural habitat types as well as the habitats of species of Community interest. In this way, the maintenance or restoration of a favorable conservation status of these natural habitat types and habitats of the species in their natural range should be guaranteed.

Priority habitat types and species are of particular importance . These are threatened with disappearing and the European Community has a special responsibility for their preservation because the main area of ​​distribution is in Europe (examples: LRT 91D0 * bog forests or the alpine goat ). The "Natura 2000" network also includes the special protection areas designated by the Member States on the basis of Directive 79/409 / EEC ( Birds Directive ).

The second pillar consists of species protection regulations for species that are endangered across Europe (Appendix IV) , which cannot be protected in clearly delimited areas, as they can occur over a large area under certain environmental conditions. Some well-known examples are the wild cat (in forests) and the European hamster .

Appendix V lists species whose extraction from nature and use can be the subject of administrative measures ( Appendix V species ).

In Article 8 of the Habitats Directive, the member states have undertaken to identify and provide the financial means to implement the directive, e.g. for land users who may have to implement management requirements on their land in order to achieve the protection goals. To this day, many German federal states have not met this obligation and have not made sufficient funds available, so that in agriculture and forestry in particular, uncertainty arose when designating Natura 2000 areas.

The Annexes to the Habitats Directive were discussed between 1988 and 1992 and drawn up based on the species and habitats of the EU member states. A model was the Berne Convention of the Council of Europe of 1979. The annexes are adapted to new scientific findings as necessary, which can be done in the run-up to the accession of new member states.

In 2015 it became known that the EU Commission wanted to subject the Habitats Directive to a "fitness check". According to media reports, Commission President Juncker wanted to "modernize" the directive, which led to criticism from nature and environmentalists. A legal opinion commissioned by WWF Germany recognized that 27,000 nature reserves were at risk from the change.

Process of declaration of protected areas

The Radegast has been designated as a nature reserve Radegasttal by the state of Mecklenburg-Western Pomerania . As a FFH area, it is part of the European Natura 2000 network. 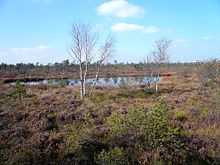 Moor eye on the moor nature trail in the FFH area Schwarzes Moor in the Hochrhön
→ Main article : Natura 2000: Procedure and designation

Among the Member States proposals for SCIs were English Proposed Sites of Community Interest (pSCI) called on the European Commission reported that sifts through the data and evaluated. In coordination with the Member States a list of which was sites of Community Importance (SCI) , Sites of Community Importance (SCI) created. There was a first-time publication of the list in the Official Journal of the European Union in 2004. The Member States have since committed to these areas within six years as Special Areas of Conservation (SAC), Special Areas of Conservation (SAC) to provide permanently protected. This status does not exist in the European bird sanctuaries (BSG / SPA), these are directly valid by announcement.

However, the designation by the European Commission does not yet constitute a legally effective protection category of its own; rather, the member states place these areas under protection according to their respective national regulations and under their national names. Some states have anchored the Natura 2000 areas as a national legal class, otherwise European protection is also embedded in other national categories.

In implementing the provisions of this Directive, Member States shall:

The Member States regulate the details of the reference.

In addition to collecting inventory data and carrying out impact assessments, measures for the protection and maintenance of FFH areas must be drawn up and implemented. For this purpose, management plans ( also called management plans in the directive ) can be drawn up (Art. 6 Para. 1 of the Habitats Directive), which enable the implementation of measures for the conservation of protected areas. Furthermore, management planning can be used to assess whether certain measures could have a positive or negative impact. The plan drawn up is binding for the nature conservation authority and sets clear protection and conservation goals for it.

In Appendices IV and V of the Directive, species are listed that are to be given special protection outside the designated protected areas (Appendix IV) or that are endangered by harvesting or removal from their wild occurrences (Appendix V). The background is that these species could not be effectively protected by the designation of protected areas, e.g. B. because of scattered occurrences that are unstable at any given location, special or particularly large-scale habitat requirements, dependence on special land use practices and the like. The species in Annex IV are particularly important in the implementation of the directive. According to the wording, their “living spaces” must not be impaired or destroyed - regardless of where they are. On the other hand, the species to be protected by special protected areas do not have any increased protection outside of these protected areas (if a coherent, sufficient network of protected areas has first been identified and their conservation status is secured). In practice, this makes the implementation of construction projects and other interventions on areas that are habitats of Annex IV species very difficult. Destruction of habitats that would threaten a local population is actually only conceivable if special compensatory measures under species protection law (so-called CEF measures) are carried out. In contrast to "normal" compensation measures (due to the intervention regulation ), here a) proof of success is necessary (not just a prognosis!) B) the measures must be carried out before the intervention / construction measure and must be effective before the intervention.

With the amendment of the Federal Nature Conservation Act (BNatSchG) in 1998, the Habitats Directive was legally anchored in Section 2 Sections 19a to 19f (European "Natura 2000" network) and in species protection in Germany. This happened with a long delay and after a ruling by the European Court of Justice (ECJ) against Germany in December 1997, which forced the then Environment Minister Angela Merkel to act. The last time Germany was sentenced for this was on January 10, 2006 by the ECJ.

Species listed in Appendix IV are "strictly protected" species within the meaning of the Federal Nature Conservation Act, so they have a higher, more stringent protection status than merely specially protected species.

Regulations of the FFH-RL for the protection of certain parts of the landscape are implemented by § 31 BNatSchG as well as in criminal law in § 329 Abs. 4 Criminal Code .

In the case of larger construction projects and interventions of other types, a special "species protection test" has been the standard for planning since around 2007. In addition to the Appendix IV species, this is dedicated to the European bird species (protected by the Birds Directive).

According to the Federal Agency for Nature Conservation , Germany designated a total of 4544 FFH areas as of 2017, which comprise 9.3% of the terrestrial and 29% of the marine area of ​​Germany.

Interventions in the FFH area 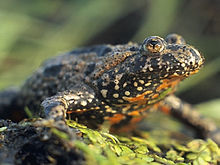 In the event of interventions in the FFH area, a