This article deals with the highest judicial authority in the EU. For the whole court system see Court of Justice of the European Union ; on the Court of the Council of Europe see European Court of Human Rights . 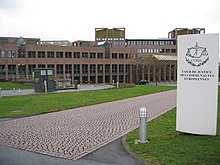 In 1999, the Irish Fidelma Macken was the first woman to hold the office of judge in 47 years. Ninon Colneric became the first female judge in Germany in 2000 .

The organization of the Court of Justice, the competences and the judicial procedure are regulated in its own rules of procedure and were published in the Official Journal of the European Union . The Ordinance is divided into: 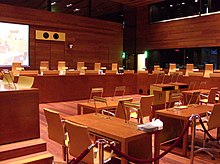 Meeting room of the ECJ

See also : Court of Justice of the European Union

The ECJ is solely responsible for actions brought by the European Commission (especially infringement proceedings ), other organs of the European Union or the member states that are not directed against the Commission, as well as for decisions in the preliminary ruling procedure.

The ECJ and the European Court of Justice have a joint Directorate General for Multilingualism. The translators at the ECJ all have completed legal training and are also referred to as "language lawyers" ( juristes-linguistes or lawyer-linguists ).

Oral proceedings at the ECJ are simultaneously translated by conference interpreters , whereby the parties are advised, if they wish to follow a written text, to forward it to the management in advance by e-mail. In this way, he can be included in the preparatory work by the interpreters. The ECJ maintains an interpreting service with around 70 civil servants and, if necessary, calls in freelance interpreters.

The first peculiarity is that the legal sources of the law of the European Union do not have a uniform, binding linguistic version, but are currently binding in 24 different languages, which results from Article 55 of the EU Treaty . If the meaning of the different language versions is different, the pure wording therefore reaches its limits, and the additional use of comparative law , systematic or teleological arguments becomes necessary.

Furthermore, problems of interpretation arise from the linguistic inaccuracy of primary law - it is the result of difficult political decision-making processes in which a large number of organs or people are involved. Many standards are limited to general formulations in order to give the institutions of the European Union a margin of maneuver and to enable dynamic interpretation. The terms used in the treaties are also autonomous, i.e. H. with meanings under Union law, to be understood and cannot be taken from the linguistic usage of individual member states. In its search for systematic cohesion, the ECJ often uses what is known as “evaluative comparative law ”, looking for the best solution in the national regulations.

Further particularities can be seen in the interpretation of the contracts according to meaning and purpose. For example, the principle of effectiveness (“ effet utile ”) is a special form of interpretation according to meaning and purpose, namely according to the objectives of the contract. Accordingly, the individual provisions of the contracts should be interpreted in such a way that they are as effective as possible. In particular, the CJEU often uses the appeal to the “effet utile” to extend the norms of primary law, sometimes considerably beyond the wording, and to give the community competences and powers that were not originally intended.

ECJ with a large hall

Judgments of the European Court of Justice, insofar as they have been given by way of a preliminary ruling under Article 267 of the TFEU (or a previous provision such as Article 234 of the EC Treaty ), initially serve to enable the referring national court to rule on the main facts. In principle, the ECJ decision only binds the inquiring court through the interpretation of the law of the European Union, whose judgment in turn theoretically only applies to the decided individual case.

An unlimited retroactive effect of the judgments is possibly prevented by the national procedural laws, insofar as they regulate that a legally binding administrative act or a legally binding judicial judgment can no longer be changed without a separate provision.

From 1953 to the end of 2016, the ECJ issued judgments or orders in around 20,000 legal cases. Around 700 proceedings are currently pending and concluded each year.

One of the most important decisions of the ECJ is the ruling in the " Van Gend & Loos " case of 1963. In this decision, the ECJ established the doctrine that European Union law is an independent legal order sui generis that is governed by the law of the member states be detached. This meant a departure from the prevailing view that the law of the European Union was ordinary international law. The decision is of great importance and caused a sensation in the professional world, as the ECJ also justified with it that the subjects of European law are not only the member states, but also the individual citizens. They can directly invoke rights that they are entitled to under EU legislation. This anchored the doctrine of direct effect in EU law.

In these and subsequent decisions, the ECJ repeatedly emphasized that the member states have voluntarily submitted to a union with an independent legal system. The fact that this is a legal order and not just a political alliance is shown time and again, especially in such decisions by the ECJ.

An equally important decision of the ECJ in connection with the free movement of goods between the member states is the Cassis-de-Dijon decision of 1979. In it, the ECJ forbade Germany to impose requirements on a product that it does not have to meet in its country of origin. The decision leads to the principle of "mutual recognition" of national product standards, which are, however, limited by so-called generally applicable minimum standards or protective clauses, for example consumer and environmental protection .

Decision-making authority of the European Court of Justice

The national tax regulations within the European Union are still hardly harmonized , especially in the area of direct taxes (unlike indirect taxes , which have been strongly standardized through the VAT directives). The European Union only has the power to harmonize legal provisions in this area if this is necessary for the functioning of the European internal market ( Art. 113 TFEU ). In addition, unanimity in the Council is required. Therefore, in the area of ​​direct taxes, there has only been harmonization in a few areas, for example within the framework of the Parent-Subsidiary Directive and the Merger Directive .

In the following decisions, Internationale Handelsgesellschaft mbH / Import and Storage Agency for Grains and Feed and Nold KG / Commission, the ECJ expanded its basic jurisprudence, using in particular the ECHR and the common constitutional traditions of the member states as sources of legal knowledge of the Community fundamental rights . Over the years he has developed an extensive set of basic jurisprudence. However, this was sometimes criticized as ineffective and dogmatically insufficient.

Other important decisions of the European Court of Justice

The main point of criticism of the decision-making practice of the ECJ is in parts of legal and political science that it inadmissibly extends European Union law to national fields of law and thus exceeds its competencies. Among other things, the charge is made that the European Court of Justice judges politically as an “agent of centralization”.

The former Vice President of the Federal Constitutional Court, Ferdinand Kirchhof, accuses the ECJ of making “unilateral decisions without regard to established national legal institutions” and thereby intervening in areas that the member states have deliberately kept free from European rules. The Court of Justice would “disregard subsidiarity, proportionality and the provisions on consideration in the European Treaties”. He therefore proposes for Germany that the approval of the Federal Constitutional Court should be required for the courts to appeal to the ECJ.

In its ruling on the ECB bond purchase program of May 5, 2020, the Federal Constitutional Court itself criticized the ECJ's ruling on this in the preliminary ruling procedure as "absolutely no longer comprehensible" and "objectively arbitrary".

The ECJ consists of one judge per member state. The judges must be independent and have the qualifications required for an activity at the highest court in their country or be of "recognized excellent qualifications". The judges will be by a unanimous decision of the Governments of the Member States after consulting the committee referred Art. 255 TFEU appointed Expert Committee formed a six-year term, which de facto of a unanimous decision Council of the European Union equivalent. Half of the judges are reappointed every three years. A reappointment is possible ( Art. 253 TFEU).

The short term of office and the possibility of re-election (which in fact leads to an extension of the term of office) have been criticized by some. In addition, the judges' independence is sometimes questioned. This assessment is based on the fact that each member state determines the judge it wants to send to the ECJ itself, while in the Federal Republic of Germany the independence of the highest judges is strengthened by the fact that they are elected by the Bundestag and Bundesrat. However, it must be countered that, even if this accusation were true, there should not be any disadvantages in practice. The procedural law of the ECJ prohibits the appointment of a CJEU judge as rapporteur in proceedings in which the member state that sent him is involved as a party. The rapporteur is in charge of the respective procedure and prepares the negotiations and the decision in terms of content. The President of the ECJ monitors compliance with this regulation.

President of the European Court of Justice

The President of the ECJ is elected for a three-year term by the judges voting for one of their number. He can be re-elected without restriction.

The President heads the administration of the ECJ and the other judicial tasks and chairs hearings and deliberations in the chambers. He assigns the cases to the ten chambers for any preparatory tasks and also selects a judge from the chamber to act as rapporteur in the respective proceedings . Furthermore, he sets the dates and the schedule for the sessions of the “Grand Chamber” and the entire court. The President also takes a personal position when it comes to requests for injunctions and the like. Ä. goes.

A special feature of the ECJ is the institution of the Advocate General ( Art. 252 TFEU ). It is the task of the Advocates General to submit a proposal for a judgment after the oral hearing ("Opinion"). To this end, they summarize the previous case law of the ECJ in similar cases and use them to justify their ideas regarding the assessment of the present case. The Advocate General is not the representative of either party, but should develop his proposal independently and neutrally. The ECJ is not bound by these suggestions, but in practice it follows the advocate general's suggestions in around three quarters of all cases. Since the decisions of the European Court of Justice are usually extremely brief even in their legal statements, it is often only the considerably more analytical statements in the Opinion that provide information about the considerations on which the ECJ's rulings are based.

Institutions of the European Union