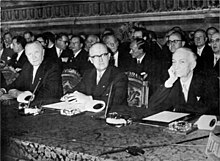 Federal Chancellor Konrad Adenauer , State Secretary Walter Hallstein and the Italian Prime Minister Antonio Segni at the signing of the Treaty of Rome

The Treaties of Rome (except in Germany and Italy simply called the Treaty of Rome ) were signed by Belgium , the Federal Republic of Germany , France , Italy , Luxembourg and the Netherlands in Rome on March 25, 1957 (Capitol, Hall of the Horatians and Curiatians in the Conservator's Palace ) . The treaties came into force on January 1, 1958 :

The aforementioned communities together with the European Coal and Steel Community formed the European Communities . It was only with the merger agreement (1965) that the commissions and the councils of ministers were also merged.

Goals of the communities established

A 10 DM commemorative coin from 1987 commemorates the thirtieth anniversary of the signing of the contract.

On the occasion of the 50th anniversary of the Treaty of Rome, each of the then thirteen countries of the euro zone minted a 2 euro commemorative coin with the same motif, each with national inscription. In the case of twelve coin variants, the contract signatures are embossed, only deepened in the Italian version . The coin issue of Luxembourg also contains a latent image of the profile of Grand Duke Henri on the lower left side of the image .

For the 25th anniversary, the Deutsche Bundespost issued a special postage stamp. The issue date of the stamp designed by Blase was May 5, 1982.

For the 50th anniversary, Germany issued a special stamp on March 1, 2007 , designed by Werner Hans Schmidt.