Council of the European Union

The European Union negotiates some policy areas in which the European Parliament has less of a say. These intergovernmental areas concern, among other things, the common foreign and security policy . Within this framework, the ministers work together in the Council of Ministers.

The functioning of the Council is regulated in Art. 16 EU Treaty and Art. 237  ff. FEU Treaty . It is composed of one representative from each member state, who must be empowered to take decisions that are binding on its government. Although the so-called Council of Ministers is a single body, its meetings are held separately according to policy area. One speaks of the council formations. For example, in the council that deals with agricultural issues, the national ministers who represent the relevant department in their government meet . The representatives can be freely chosen by their government; however, important decisions are usually taken when the ministers are present.

The Council of Ministers is not chaired by a person, but by a state. This changes every six months and rotates among the member states; a state does not become chairman again until all other states have had their turn in the meantime. It is also said that the state in question holds the presidency of the Council. The chairman of a council formation is then the minister from that state. The respective head of government also represents his state on important occasions. The current state of the Council Presidency, the previous state and the future state have been working together in a trio presidency since 2007. This should give more continuity.

The seat of the Council of Ministers is the Europa building in Brussels . The conferences take place in Luxembourg in April, June and October .

Europe building , seat of the Council of the European Union in Brussels

The council is a unified body , but due to the different policy areas it meets in different configurations - the so-called council formations, in which the representatives of different departments meet. Each formation consists of one representative from each member state. According to Article 16 of the EU Treaty , these representatives are authorized to act in a binding manner on their respective government. For this reason, federally constituted member states can also send ministers from the sub-national level to the council meetings if the central government has no competences on the issue in question. This is more often the case for Belgium, for example , which sends ministers from the regions or communities to various council formations .

Until June 2000 the council met at times in twenty different configurations. Thereafter, the number was initially reduced to sixteen, in June 2002 it was further reduced to nine, and the Lisbon Treaty expanded to ten in 2009.

The General Affairs Council , in which the foreign or European ministers of the member states are represented, plays a special role . It coordinates the activities of the other council formations and makes decisions that cannot be assigned to any other council formation. The foreign ministers also meet in the Foreign Affairs Council , which is responsible for the common foreign and security policy. The Foreign Affairs Council is also the only one that has another member in addition to the representatives of the member states, namely the EU High Representative for Foreign Affairs and Security Policy . He chairs the Foreign Council, but has no right to vote on decisions.

In detail, there are the following council formations:

See also : List of the Governments of the States of the European Union

The Council formations usually meet twice per Council Presidency, i.e. every three months, at ministerial level. The General Council , the Agriculture and Fisheries Council and the Economic and Financial Affairs Council meet more frequently, sometimes on a monthly basis. The meetings of the council are in principle public when it acts as a legislator; Conferences at which no legislative decisions are made, however, usually take place non-public.

The actual preparation of the content of the Council meetings is carried out by the Council working groups , which are made up of officials from the member states and each specialize in certain policy areas. The Council also has a general secretariat with around 2,500 employees for administrative and translation activities. The French Pierre de Boissieu has been General Secretary since 2009, followed in 2011 by the German Uwe Corsepius , who was in turn followed on July 1, 2015 by the Dane Jeppe Tranholm-Mikkelsen. His term of office is expected to end in 2025.

→ Main article : Presidency of the Council of the European Union

The Presidency of the Council of the European Union (also known as the Council Presidency) changes every six months between the member states; the meetings of the various council formations, but also of all subordinate bodies such as the council working groups , are each chaired by the representative of the state concerned. The Foreign Affairs Council , chaired by the EU High Representative for Foreign Affairs and Security Policy, is an exception .

Since 2007 the presidency of the council has been exercised in the form of a so-called trio presidency for a period of 18 months by a group of three member countries each. One state continues to hold the presidency for six months, but the three states present a joint program and can also represent each other when presiding over individual council meetings.

After the UK announced that it would give up its Presidency in the second half of 2017, the Council decided to bring the Council Presidencies forward by six months from 1 July 2017.

Votes in the Council of the European Union usually take place with a qualified majority , in the cases specified in the treaties, however, with a simple majority or unanimously . In purely procedural matters, the Council usually takes decisions with a simple majority ; in matters relating to the common foreign and security policy and other politically sensitive matters, such as tax policy, the Council decides unanimously (see European Union legislation ).

According to Art. 238 (1) TFEU, there is a simple majority if the majority of the member states agree.

The ordinary legislative procedure , which applies in most EU policy areas, and many other decisions in the Council require a qualified majority. According to Art. 16 (3) TEU, the qualified majority is always decisive if the contracts do not provide for any other procedure. Since the Treaty of Lisbon, this has been defined by the principle of a double majority ( Art. 16 (4) TEU), which requires that

In practice, this means that at least 23 (out of 27) member states have to agree in order to safely enforce a decision. In fact, even in areas where theoretically only a qualified majority would be required, decisions are usually made unanimously ( consensual ).

In the event that the Council does not take a decision on the proposal of the European Commission or the High Representative of the European Union for Foreign Affairs and Security Policy , Art. 238 TFEU provides for special regulations.

In order to have comparable data on the population of the individual member states, starting with the 2011 census , a Europe-wide census takes place every ten years according to standardized criteria.

Determination of the qualified majority by 2017 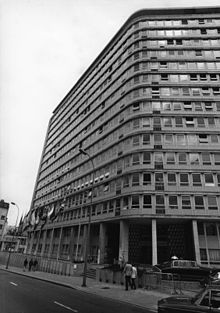 Seat of the EC Council of Ministers in Brussels in 1975.

The principle of the double majority was only finally introduced in 2017; it was applied from 2014 unless no Member State objected. Otherwise, the definition of the qualified majority provided for in the Treaty of Nice was temporarily applicable until then . For this purpose, all member states were assigned a certain number of votes, ranging from 3 (Malta) to 29 (Germany, France, Great Britain, Italy). For the adoption of a legal act were necessary after this procedure

The weighting of votes was roughly based on the population of the member states, although the smaller states were proportionally preferred (so-called degressive proportionality ). However, the distribution of votes was not based on a clear key. The four most populous states all had the same number of votes, even though Germany has significantly more inhabitants than the other three. Some of the countries that only acceded in 2004 had a rather low number of votes in relation to their population; In contrast, Spain and Poland did quite well in terms of vote weighting.

The council takes part in the legislature , the legislation. However, its members are part of the national governments, i.e. the executive branch . It is seen as a typical case of executive federalism . Critics see this as a contradiction to the principle of the separation of powers and a reason for the EU's perceived democratic deficit . The so-called game about the gang is often criticized, in which governments try to enforce legislative proposals for which there is no parliamentary majority at national level via the detour of European legislation. In the ordinary legislative procedure , which applies to most EU policy areas, the directly elected European Parliament as well as the Council must approve a legislative act so that it can come into force. Incidentally, the separation of powers in the member states is often not characterized by a strict division but rather by entanglement. For example, in Germany not only the Bundestag or the Bundesrat but also the federal government can propose a law.

LobbyControl found in a study from April 2019 that the positions that an EU member state represents in the Council are rarely made public. Industry lobbyists could influence politicians at national level and thus, in the background, also influence the decisions of the Council.

Commons : Council of the European Union  - collection of pictures, videos and audio files

Institutions of the European Union