The year 1952 was marked by the ongoing Korean War . In Europe, the Montanunion laid the foundation for what would later become the European Community, and the Federal Republic was thus further integrated into Western Europe. 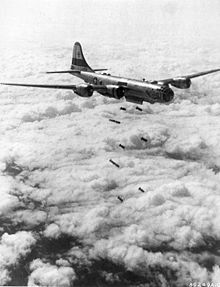 A US Air Force B-29 carpet bombing Korea

The ongoing Korean War developed into a trench warfare along the 38th parallel; Even massive bombing of North Korea's infrastructure did little to change that. The USA was interested in strengthening its position in the Far East and played a key role in the conclusion of a peace treaty with Japan that officially ended the occupation regime. At the same time, the USA demonstrated their military strength against the Eastern bloc by detonating their first hydrogen bomb ; The election of Republican Dwight D. Eisenhower as US President, who replaced Democrat Harry S. Truman , did not change this firm position .

Founding members of the ECSC

On the German question, Adenauer 's CDU government consistently backed integration with the West against the opposition of the SPD. The Soviet Union tried to counteract this development by making the offer of a reunited but neutral Germany with the Stalin note . However, Stalin was not able to prevent the Bonn government from deciding to join the European Defense Community .

The European Coal and Steel Community (= “Montanunion”: Federal Republic of Germany, Benelux countries, France and Italy), founded by the Treaty of Paris on April 18, 1951 , came into force on July 23, 1952.

On July 24, 1952, the district reforms in the GDR were implemented. This meant a redistribution through local government reforms into districts and districts . The second party conference of the Socialist Unity Party of Germany (SED) also took place in July 1952 in the Werner-Seelenbinder-Halle in East Berlin . Under the formula of the "planned construction of socialism " coined by Walter Ulbricht , a "Sovietization" of society and a strengthening of state power based on the Soviet model were introduced.

The Middle East was particularly shaken by two coups d'etat: In July, King Faruq was overthrown by the military in Egypt and his underage son Fu'ad II was formally crowned king; A little later, the military deposed King Talal in Jordan , who was replaced by King Hussein I. In the meantime, Israel has agreed a reparations agreement with the Federal Republic of Germany , which has met with criticism, especially from the Holocaust survivors.

In the Latin American countries, Fulgencio Batista 's coup in Cuba and Víctor Paz Estenssoro 's seizure of power in Bolivia are particularly noteworthy; The latter aroused the suspicion of conservative circles in America with his socialization policy.

In Africa, colonial rule, especially that of the British and French, continued; With the Mau Mau uprising in Kenya , however, the first powerful independence movement made itself heard, which the British opposed by imposing martial law.

In the field of technology, progress was evident, among other things, in the presentation of new supercomputers such as the UNIVAC . The use of jet aircraft ( De Havilland DH.106 Comet ) also became increasingly common in the civil sector, making it possible to fly from England to South Africa or make a return trip across the Atlantic on the same day. Meanwhile, television was introduced in the two German states at the end of the year.

In sports, the focus was on the Olympic Games. The Winter Games took place in Oslo, the Summer Games , dominated by the achievements of Emil Zátopek , in Helsinki. It was the first Olympic Games after the Second World War in which German athletes were again allowed to take part. 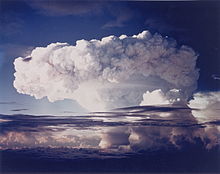 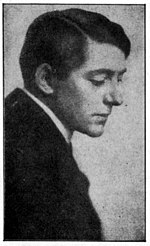