Simplified representation of the division of the earth into " First " (blue), " Second " (red) and "Third" world (green, as of the mid-1970s during the Cold War.)

The third world originally referred to the non-aligned states that could not be assigned to either the first or the second world in the East-West conflict of the Cold War .

With the end of the Cold War and the East-West conflict, the meaning of the term Third World changed from the original non-alignment of the states indicated to become a synonym for developing country . 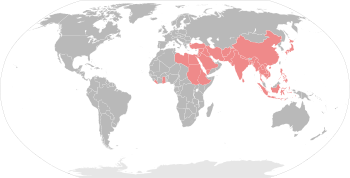 The States participating in the Bandung Conference in 1955 referred to themselves as the Third World .

The term “Third World” ( French Tiers Monde ) was coined by the French demographer Alfred Sauvy in his article “Trois mondes, une planète” in L'Observateur on August 14, 1952 and should, in analogy to the Third Estate (French Tiers État ) before the French Revolution, denote those countries which made up the majority of the world's population, but were nonetheless without rights in world politics.

"The underdeveloped countries, the third world, have entered a new phase [...] This third world, ignored, exploited, despised like the third estate, finally wants to be something."

At the conference in Bandung on April 18, 1955, the 29 countries present from Asia and Africa adopted this designation for themselves. They saw themselves as an association of poor countries that not only fought for an economic betterment, but also against colonialism and racism. When choosing the own designation as “Third World”, a different interpretation than the original one from Sauvy was in the foreground: namely the “Third World” as a union of those countries which did not belong to either of the two power blocs of the Cold War .

After the official establishment of the Non-Aligned Movement in Belgrade in 1961, the term “Third World” was closely linked to this movement.

The non-aligned movement was always a heterogeneous structure. The term “Third World” gradually became a mere synonym for “economically underdeveloped countries”. Today the term is only used with this meaning, if at all.

At the end of his life, Alfred Sauvy revoked the term "third world" he had coined in an article for the newspaper Le Monde on February 14, 1989. It is going too far to subsume the countries of sub-Saharan Africa and the “ panther states ” under one term.

Third world as a political term

The conference building in Bandung during the meeting in 1955 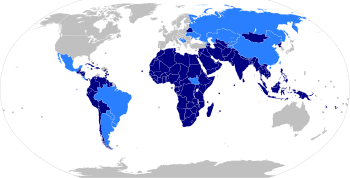 With the spreading East-West conflict after the end of the Second World War , the Afro-Asian countries named themselves the Bandung Third World or Third Bloc in 1955 to make it clear that they were willing to take a “third way” of non-alignment to tread. The countries of Latin America , which had been tied to the West under the Rio Pact since 1947 , did not initially join this group of non-aligned countries, but only in 1961 with the establishment of the Non-Aligned Movement .

The narrow block-political understanding of the Third World already weakened in the early 1960s, because the term non-aligned was interpreted almost arbitrarily by different countries. In addition, there was membership or non-membership in the Warsaw Pact and NATO military blocs .

Since the first UNCTAD conference in 1964, the term “Third World” has included the countries of the Group of 77 , which were then also joined by the countries of decolonization . The Group of 77 acts as a kind of Third World trade union, but has been a highly divergent group from the start, from the size and economic resources of the countries to the different political regimes and styles of development. Despite all the differences, attempts were made to stand up to the industrialized countries together and to exert political influence with the demand for a new world economic order . Due to the different situations in the individual regions in the areas of economy, culture, history and politics, the group was unable to come to a political agreement. The association recognized the differences in development characteristics and gained knowledge of the conflicting interests of the individual regions. In 1973/74 the cartel of the OPEC countries succeeded with its price policy in gaining a leading role for the developing countries in striving for a redistribution of resources on a world scale. But this ultimately led to differentiations and groupings between the oil-producing and energy-dependent countries.

At the end of the Cold War, the Second World disappeared and thus dissolved the battle of the blocks. The non-alignment was therefore no longer relevant for the Third World. The only common criterion for the Third World states was their underdevelopment compared to the industrialized countries. Different development theories based on a global North-South conflict lead to enormous disputes about the differences in the Third World.

Third world as a generic term for developing countries

The Third World comprises a group of about 130 economically underdeveloped states, which are mainly located in the southern hemisphere of our earth and have deficits in the areas of health, education, social services, infrastructure and politics. These states are known as developing countries and comprise around 76 percent of the world's population. In contrast to the industrially highly developed industrialized countries , these peripheral areas are characterized as economically underdeveloped with slow progress in the field of industry.

The generic term “Third World” assumes the developing countries have certain similarities, although these countries are very different from one another. On closer inspection, one can see that the so-called Third World countries differ in countless features, such as their level of development, growth rate and population. These differences can be particularly emphasized on the basis of the two subgroups of the Third World. The groups are referred to as the Fourth World and the Emerging Markets .

The Fourth World ( Least Developed Countries ) comprises more than 40 countries, mostly states on the African continent, which are characterized by their enormous underdevelopment and poverty compared to other developing countries. With regard to their raw materials, their capital and their exports, these countries are dependent on development aid and therefore have insufficient conditions for economic growth . The food imports that are also necessary are having an increasingly negative impact on the high level of foreign debt that is already in place, and this in turn represents a blockade for required foreign loans.

Worldwide income distribution 1970 ( logarithmic representation ): What is striking is the division of the world into “poor” and “rich” countries, and the fact that poverty in the world was mainly concentrated in Asia.

Worldwide income distribution 2015 ( logarithmic representation ): The division of the world into two has disappeared; Asia is in the middle and poverty is concentrated in Africa.

The disappearance of the term Third World points to this inhomogeneity of the countries, which is why critics do not consider it sensible to lump all developing countries under one roof. In order to do justice to the various states, there cannot be an all-encompassing theory that pursues the goal of developing into a modern industrial nation.