The HDI not only takes into account the gross national income per capita, but also life expectancy and the duration of training based on the number of school years a 25-year-old has completed and the expected duration of a child's education at school age. The HDI was essentially developed by the Pakistani economist Mahbub ul Haq , who worked closely with the Indian economist Amartya Sen and the British economist and politician Meghnad Desai .

As of the Human Development Report 2010, the three dimensions are calculated as follows:

Finally, the HDI is calculated as a geometric mean from the three dimensions:

The minimum and maximum values ​​(target values) are used to normalize the sub-indices in the value range [0; 1].

To distinguish it from the original method, the index determined by this method is sometimes also called the New Human Development Index (NHDI).

The life expectancy factor is regarded as an indicator of health welfare, nutrition and hygiene ; the education is level, as well as the income of acquired knowledge and participation in public and political life for a reasonable standard of living .

There are three main indices, whereby the formation is split into three sub-indices:

The limit values ​​are the minima / maxima that have ever been reached by a country.

The indices I for A , B1 and B2 are now calculated

The education index B is calculated to

The income index Z is calculated to

The HDI is calculated from this

This means that the HDI assumes values ​​between zero and one. According to the HDI value, UNDP has divided the countries into four development categories since 2009:

The calculation method before 2009 differs significantly from the current one. In the old HDI, the literacy rate of adults was also counted with two thirds of the weighting for sub-index B and the combined primary, secondary and tertiary gross enrollment rate with one third of the weighting.

However, since schools and teaching qualifications in developing countries cannot be equated with those in industrialized countries, the index was re-created in favor of pure school duration and expected training time. 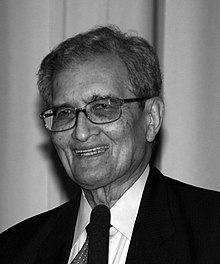 According to Amartya Sen, the basic motivation for the development of the Human Development Index in 1990 was the lack of informative value of previous measuring instruments (e.g. assessment of development according to gross domestic product ). The HDI should enable the level of development to be measured, which is more in line with people's needs and takes into account as many aspects of development as a relatively simple index can. Mahbub ul Haq (one of the inventors of the HDI) argued that development should increase people's possibilities. The development goals therefore also include values ​​such as nutrition, health, education, leisure and opportunities for people to have a say.

In the introduction to the first Human Development Report from 1990, the aim was to:

“People are the real wealth of a nation. The basic objective of development is to create an enabling environment for people to enjoy long, healthy and creative lives. This may appear to be a simple truth. But it is often forgotten in the immediate concern with the accumulation of commodities and financial wealth. "

“People are the real wealth of a country. The basic goal of development is to create an environment in which people can enjoy long, healthy and creative lives. This may seem like a simple truth, but it is often forgotten behind concerns about the accumulation of material goods and financial wealth. "

The informative value of the HDI is controversial. The point of contention is, for example, the weighting of the aspects of human development, with different assessments prevailing as to which aspects are to be included and how high these should be assessed.

The HDI uses mean values for a country and therefore cannot directly map inequalities within the country. The structure of the HDI has been changed several times in the past few years (for example in the treatment of income or the modification of upper and lower limits). This also results in limited comparability of the data over the years.

The HDI is criticized for reasons of redundancy , since the indicators recorded in the HDI correlate very strongly with the gross national income per capita and are therefore recorded by it.

The conservative economist Bryan Caplan criticizes the HDI for several reasons: everyday important material goods are undervalued and education is overrated. In addition, full marks can only be achieved for the educational parameter if the entire population consists of schoolchildren or students. Caplan also sees the problem that the scale undervalues ​​gross national income. Since they are already at the upper end of the scale, rich countries have little further development in this area. It is similar with life expectancy. In addition, the HDI makes Scandinavia the top of human achievements (compare Swedish model ), which makes it practically a measure of how "Scandinavian" a country is. But Caplan has doubts that there is no room for improvement there.

The HDI is also criticized for not taking ecological factors into account. According to the World Wide Fund For Nature (WWF), countries with a very high level of human development currently have a particularly large ecological footprint . The organization assumes that currently not a single country fulfills the conditions of a reasonable standard of living and an earth-friendly ecological footprint. Since an intact ecosystem can be seen as the basis for human well-being and a high life expectancy, the WWF believes that the ecological footprint should be taken into account as a factor in the HDI.

1 Andorra and Liechtenstein were recorded for the first time in the HDI 2010.
2The Republic of China in Taiwan is not a member of the UN due to the Taiwan conflict and is therefore not included in the Human Development Report. However, the national statistical authority calculates its own value for the HDI using the same methods. Puerto Rico, Hong Kong and Macao are also not independent states, but are listed here for comparison purposes.

3The Republic of Kosovo is not a member of the UN and is therefore not included in the Human Development Report. The United Nations Development Program nevertheless uses the same methods to calculate a value for the HDI, but publishes it separately.

Countries not included in the HDI

Countries for which no or no suitable data were available at the time of compilation were not taken into account. This affects the following states and areas:

The most developed countries since 1975

A look back at the annual rankings in the Human Development Index shows that Norway has been number one for several years; in previous years Canada, Iceland, Switzerland and Australia also came first:

Note: The method of calculating the index has changed since 1990.

Development of the countries according to HDI since 1990

The following list gives an overview of the development of the Human Development Index in various countries since 1990. All values ​​are determined using today's calculation method.

Subnational regions according to HDI

German Society for the United Nations (translations and summaries):