The title of this article is ambiguous. Further meanings are listed under Barbados (disambiguation) .

Barbados [ baʁˈbaːdɔs ] is an island nation in the Atlantic Ocean and part of the Lesser Antilles . Barbados is located northeast of Venezuela in the Caribbean and is geographically included in Central America . The former British colony has been independent from the United Kingdom since 1966 , but as a Commonwealth Realm a sovereign member state of the Commonwealth of Nations and linked to the British Crown in personal union.

Aerial view of the capital Bridgetown

Barbados is the easternmost island of the island chain of the Lesser Antilles and is located in the Atlantic Ocean . Unlike many of the neighboring Caribbean islands Barbados is not volcanic in origin, but is a so-called preliminary threshold ( english Forearc ) of an accretionary prism is, in turn, by former undersea reef limestones grew up. This limestone plateau reaches a height of 336 m in Mount Hillaby . The oldest layers were formed in a warm period 125,000 years ago, in which the sea level was four to six meters higher than it is now. In addition to the main island, Barbados also includes the tiny Culpepper Island , located just off the east coast .

About 180 km to the west is the island state of St. Vincent and the Grenadines .

The climate of Barbados is warm all year round with small temperature differences and an annual mean of 26 ° C. Precipitation is concentrated in the rainy season from May to October and reaches 2,000 mm per year in the central highlands. Despite this amount of precipitation, there are no larger bodies of water on the island due to the porous limestone subsoil.

Barbados lies in the catchment area of Atlantic hurricanes , which usually between June to November Atlantic hurricane season lasts. During this time Barbados is increasingly under observation of the state meteorological service ( Barbados Meteorological Services ), which warns of possible natural disasters with information and forecasts.

In the past, tropical rainforest covered almost the entire island. In the meantime it has been largely supplanted by extensive sugar cane plantations and cultivated land. Only in Turner's Hall Wood are there remnants of the tropical forest on an area of ​​approx. 18 hectares. The national flower is the Red Pride of Barbados ( peacock shrub ), it is included in the country's coat of arms.

Barbados' wildlife includes only a few species. First and foremost there are different species of monkeys , mongooses , hares and lizards . Leatherback turtles lay their eggs on the beaches in April and May . In addition to hummingbirds, there are many water birds such as seagulls and herons . Barracuda , parrot fish and flying fish are found in the waters around the island .

The inhabitants of the island are Barbadians called, the corresponding adjective is BARBADIAN . The Barbadians call themselves Bajans [ ˈbeɪdʒənz ]. Bajan, a Creole dialect based on English , is also the language used predominantly in everyday life. The official language on the island is English, which largely corresponds to British English in spelling and pronunciation .

The population itself is made up of about 90% of the descendants of African slaves , about 4% of whites, predominantly of British and Irish descent, as well as Asians ( Indians , Chinese ) and mulattos . In 2017, 12.1% of the population were born abroad.

More than a third of the population lives in the capital Bridgetown and its suburbs. Other focal points of the population are the touristic south coast (Parish Christ Church ) and the west coast (Parish St. James ). Besides the capital there are three other cities: Speightstown , Holetown and Oistins . On the east coast, the seaside resort of Bathsheba is a center of tourism. The regional center in the east of the island is Six Cross Roads .

The pre-European inhabitants of Barbados were Arawak and Caribs . Around 350 AD, 800 AD and in the 13th century, three waves of immigration reached the island. In between and afterwards the island was isolated from the mainland.

The name Barbados ( Portuguese os barbados = (the) bearded) was given to the island in 1536 because the Portuguese explorer Pedro Campos was reminded of beards by the freely hanging roots of the fig trees and named the island after them.

In the 15 years after the discovery of Barbados by Pedro Campos in 1536, Spanish conquerors enslaved numerous residents for plantation work on other islands. The rest of the local population fled. Just under a century later, the English found an orphan island.

In 1625 England took over the island from the Portuguese . It remained in British possession until 1962. 1627 began the settlement of the then deserted island by Great Britain. Slaves from Ireland and Indenture slaves from all over the British Isles were settled.

Barbados's economy was based on the production of cane sugar that was shipped to England from the early 1640s . In 1655, for example, the island exported around 8,000 tons to metropolitan Europe, making it one of the largest sugar producers in the world. Barbados remained heavily dependent on sugar, rum and syrup production well into the 20th century .

Barbados has a long parliamentary history. It has the third oldest parliament in the Commonwealth (after Westminster and Bermuda ). As early as 1639, the first parliament was set up with the House of Burgesses . After conflicts with England, the rights of parliament and those of the citizens of Barbados were laid down in the “Charter of Barbados, or Articles of Agreement” in 1652 . This constitutional charter guaranteed u. a. freedom of religion, rule of law, property and extensive parliamentary rights and independence.

The rights that initially only applied to the English plantation owners were extended to the black majority after the full emancipation of slaves in 1838 up to independence on November 30, 1966. Active and passive voting rights for women were introduced in October 1950. From 1958 to 1962 Barbados was a province of the West Indian Federation .

After independence, a parliamentary democracy developed in Barbados, aware of its history and traditions. In September 2020, the Barbadian Prime Minister Mia Mottley announced that the country would be declared a republic on the occasion of the 55th anniversary of Independence Day on November 30, 2021. 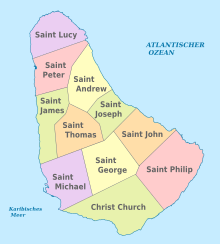 Barbados is divided into eleven parishes , which date back to the 1645 structure of the Anglican Church.

Barbados has a bicameral parliament (a House of Assembly with 30 members elected every five years and a Senate with 21 appointed members). The right to vote is available from the age of 18. In the country report Freedom in the World 2020 by the US non-governmental organization Freedom House , the country's political system is rated as “free”. Politics is essentially determined by the two big parties, the Barbados Labor Party (BLP) and the Democratic Labor Party (DLP).

In the 2018 elections, the BLP received all mandates in the House of Assembly and, in Mia Mottley, was the first female Prime Minister of Barbados. This friend replaced Stuart as Prime Minister of Barbados, who had taken over from his late predecessor David Thompson . The ruling Democratic Labor Party announced in 2015 that it would change the constitution and establish Barbados as a republic in 2016, but this did not happen. On September 16, 2020, the Barbadian government announced again that it would convert the country - this time by November 2021 - into a republic.

In the 1990s, the tourism industry and craft production of the sugar industry lost their economic rank. Oil is produced off the coast of Barbados . The production in 2005 was approx. 1,000 barrels / day with reserves of 2.5 million barrels. On January 28, 2016, the EU Commission presented a package of measures to combat tax evasion , including Barbados on the black list of tax havens .

The country's largest trading partner is the USA.

All GDP values ​​are given in US dollars ( purchasing power parity ).

The state budget included expenditures in 2016 of the equivalent of 1,644 million in US dollars , which were income equivalent to 1,480 million US Dollar against. This results in a budget deficit of 3.5% of GDP . The national debt was over 130% of GDP in 2017.

Grantley Adams International Airport is the main airport on the island and is located in Seawell in Parish Christ Church, around 12.9 km east of the capital Bridgetown.

At 13.0670 north latitude and 59.4830 west longitude, towards the end of the 1960s, Gerald Bull's experimental cannon (HARP Gun) was located , which could fire its projectiles at heights of up to 180 kilometers.

Between 1963 and 1968 some sounding rockets of the types Nike Apache , Arcas and Nike Cajun were launched from Barbados .

The Canadian McGill University maintains the Bellairs Research Institute in Holetown, which was founded in 1954 by Commander Carlyon W. Bellairs. The institute offers researchers from various disciplines from all over the world the opportunity to do research stays and hold workshops and the like. It also enables students at McGill University to do a practical semester and practical courses.

The Hamburg Max Planck Institute for Meteorology operates a weather station and cloud observatory , the Barbados Cloud Observatory (BCO) , together with the Caribbean Institute for Meteorology and Hydrology on the eastern tip of the island ( Deebles Point ). A wide variety of instruments (e.g. weather radars and lidars ) have been investigating tropical cumulus clouds and the trade winds there since April 2010 .