The title of this article is ambiguous. For the network manufacturer, see Aruba Networks .

Aruba [ aˈruːba ] is one of the three ABC islands ( A ruba, B onaire , C uraçao ), which geologically belong to South America and are part of the Lesser Antilles in the southern Caribbean . The island is 25 kilometers north of Venezuela . Along with Curaçao and Sint Maarten and the Netherlands (consisting of the Netherlands in Europe and Bonaire , Sint Eustatius and Saba in the Caribbean), it is one of the four equal countries of the Kingdom of the Netherlands . Like the other countries, Aruba has its own constitution, currency and government. The island enjoys complete internal autonomy, but is not a sovereign state (has no external sovereignty).

Aruba is the westernmost and smallest of the three ABC islands . It is mostly flat, max. 30 km long and max. 9 km wide. The highest mountain is the Jamanota with 188 m. The notable elevation is the Hooiberg , which is seen everywhere from the island and is 168 m high. The island is characterized by miles of white beaches, while the east is characterized by partly bizarre rocky coasts .

For the purposes of the census, Aruba is divided into eight regions, but they have no administrative functions. These are further subdivided into 57 zones.

The population of Aruba is descended from indigenous indigenous people, from Europeans (especially from the Dutch), to a lesser extent from Sephardic Jews and from African slaves. The natives belonged to the South American tribe of the Arawak Indians. Archaeological remains of bones and utensils indicate a relationship between the South American Arawaks and the inhabitants of Aruba. After most of the Indians from Aruba were brought to Santo Domingo ( Hispaniola ) to work in the mines, Aruba was settled by Juan Martín de Ampués on behalf of the Spanish king. In the second half of the 17th century, AO Exquemelin wrote that the WIC had a sergeant and 15 soldiers stationed on Aruba and that the island was inhabited by Indians who spoke Spanish. There is no doubt that the population of the three islands of Curaçao, Aruba and Bonaire consisted mainly of Indians and soldiers stationed in the Dutch West India Company. The basis of the Papiamentu language was laid with the flowering of the African slave trade.

In 1806, according to Commander Van den Broek, more than half of the head of families in Aruba were Indian heads of families.

Today's population of Aruba consists of 40 other nationalities in addition to the Arubans. The Arubans make up about 80% of the population. The largest group of the remaining inhabitants of Aruba are the Dutch with 10%. The remainder can be attributed to some other Europeans and a large proportion of South Americans.

The official language of Aruba is Dutch , the lingua franca , also with offices, is also Papiamento . This is a separate spelling of Papiamentu, which differs from the orthography on Curaçao and Bonaire.

In 2010 it was surveyed which language is spoken at home. The following proportions of the 101,053 inhabitants were found:

The proportion of Spanish is due to the proximity to Venezuela. English has become important through tourism; it is an optional subject in school from the 4th grade.

The majority of the population, 75.7%, belong to the Roman Catholic Church and 6.3% belong to other religious communities. (Last updated 2012)

Aruba is outside of the hurricane zone and enjoys sunny weather and cooling trade winds all year round. The lush cacti, aloe plants and the unmistakable silhouettes of the Divi-Divi trees ( Caesalpinia coriaria ) give the landscape a special charm. The Arikok National Park in the south offers an insight into the island's vegetation.

Landscape in the interior of Aruba

The climate in Aruba is tropical - maritime with an average temperature of around 27 ° C and minimal seasonal differences. In January the average temperature is 27 ° C, in July 29 ° C. Much of the rain, carried along by the prevailing east wind, already falls over the southern islands of the Lesser Antilles ( Windward Islands ) , so the climate in Aruba is very dry. The annual precipitation is between 250 mm and 510 mm. The rainy season lasts from October to December.

As a result of the low annual rainfall, drinking water must be obtained from a seawater desalination plant .

Aruba was discovered and settled by Spaniards in 1499 . The Netherlands acquired the island in 1636. In the 19th century it became economically interesting in the wake of the gold rush . Savaneta is the oldest city on the island.

During World War II, the islands of Aruba and Curaçao had the world's largest oil refineries. On February 16, 1942, they were attacked by German and Italian submarines with on-board cannons , the first bombardment of the American continent by the Axis powers during the Second World War.

In the last decades of the 20th century, the island's booming tourism gave the island a further boost. Aruba officially separated from the Netherlands Antilles in 1986 . a. Bonaire and Curaçao belonged to, and became an autonomous country within the Kingdom of the Netherlands .

Efforts to achieve full independence from the Netherlands were temporarily frozen in 1990 at the request of the country of Aruba.

Evelyn Wever-Croes has been Prime Minister since November 2017.

From 1825 to around 1915, gold mining was the largest industry in Aruba . Aruba's largest city after the capital Oranjestad is St. Nicolas. It developed to this size during the time of gold mining. In 1924 the Lago Oil & Transport Company settled in Aruba. The oil industry on the ABC Islands grew very quickly in the 1920s and led to a major change in the economic structure. After the Lago oil refinery opened in the mid-1920s, St. Nicolas developed into the island's economic center.

During the Second World War, the refineries played an important strategic role: They ensured the energy supply for the USA. After 1945 the oil industry lost its importance. The refinery, once one of the largest in the world, closed in 1985. Reopened in 1990 under American company management, the new company specialized in the refining, transhipment and storage of oil. The oil industry has since regained its central role in Aruba's economy. Oil was Aruba's main product until 2009, when petroleum refining and storage ceased.

There are also many offshore banks and data processing companies on Aruba . Since Aruba has been on the OECD's index as a tax haven because its financial structures are conducive to large-scale tax evasion and money laundering, the government has taken many steps to deprive “tax savers” of these opportunities and thus to meet the requirements of the OECD. Since July 1, 2005, Aruba has been part of the EU tax treaty as an associated area of ​​the Netherlands. Large-scale tax evasion and money laundering are no longer possible.

Except for the cultivation of aloe , agriculture is of little importance, as the climate with lots of sun, tropical temperatures, but little rain, leaves behind poor soil. The industry is largely limited to the manufacture of products from the Aruba aloes plant . The climate and the dry earth are particularly suitable for the aloe culture. Since 1999 there has also been a brewery, the Brouwerij Nacional Balashi .

Aruba's main trading partners are the Netherlands , the USA , Colombia and Venezuela .

The official currency is the Aruban Florin (AWG). One florin is made up of 100 cents. There are coins of 5, 10, 25 and 50 cents as well as one, two and a half and five florins. The square 50 cent coin, called “yotin”, is probably the most famous coin in Aruba.

The official newsletter is the Afkondigingsblad van Aruba . The Tele Aruba NV is a company based radio and television companies.

The tourism since the end of the oil industry main industry and main source of foreign currency Aruba. Aruba is visited by around 1.5 million tourists each year , most of whom are in the tourist centers west of the capital.

More than 20 years ago, the underwater world around the island was placed under nature protection. This has made Aruba and its neighboring islands a world famous diving destination. Divers can see not only soft and hard corals , but also numerous sponges , anemones , gorgonians , seahorses , scorpion fish , rays , barracudas , sharks , sea ​​turtles and cuttlefish . There are also some shipwrecks off the coast of the island , including the German freighter Antilla , sunk by the crew themselves in 1940 , which are easily accessible for divers. 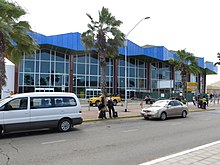 Aeropuerto Internacional Reina Beatrix Airport is located south of Oranjestad. Direct flights to North and South America and Europe start from here. In 2012 a total of 2,120,578 passengers were handled. KLM and TUI Airlines Nederland offer flights from Amsterdam to Oranjestad. In 2013, the state-owned airline Aruba Airlines was founded. It has two Airbus A320s that fly to destinations in Colombia and Panama. The airport may be due to a closed in March 2000 period of ten years and in 2009 extended the contract between the governments of the United States and the Kingdom of the Netherlands as a Forward Operating Location (to German  outworked base be used for military purposes) of the United States.

In 2012, the groundbreaking ceremony took place for the construction of a tram line connecting the cruise terminal and the pedestrian zone of Oranjestad. The Oranjestad tram was scheduled to start operating at the end of 2012, and the first test drives could be carried out shortly before Christmas. Three open, battery-powered vehicles were ordered for operation, and their engines are powered according to the hydrail principle. On February 19, 2013, the tram line, operated by the local company Arubus , officially went into operation.

Aruba has three ports that are exclusively on the more densely populated west coast. The port of Oranjestad is approached by many cruise ships that operate in the Caribbean. Other ports are in Barcadera and Sint Nicolaas , although the latter has lost importance with the end of the oil industry in Aruba. 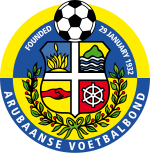 Logo of the Arubaanse Voetbal Bond

The most popular sport is baseball . The island has its own national baseball team, with some players from Aruba playing in the World Baseball Classic as part of the selection in the Netherlands. The island has the Don Elias Mansur Ballpark .

Aruba has been participating in the Olympic Games with its own team since the 1988 Summer Olympics in Seoul . So far, a total of 18 athletes have competed for Aruba, nine of them in athletics, four in swimming, two in sailing and one each in weightlifting and judo competitions. No medal has yet been won. Aruba has only competed in the Summer Olympics so far. The National Olympic Committee is called Comité Olímpico Arubano and was founded in 1985.

The football association, the Arubaanse Voetbal Bond , was founded on January 29, 1932. The national football team of Aruba played their first international match against the selection of Curaçao in April 1924. They are currently in 120th place in the FIFA world rankings (June 2014). The football association is a member of CONCACAF and has also been a member of FIFA since 1986 . Since the 1998 World Cup, Aruba has regularly participated in World Cup qualifiers. However, the team has not yet qualified for the World Cup or the CONCACAF Gold Cup . Almost all of Aruba's national players play in clubs on the island.

Sons and daughters of the island