This article covers the island and the country of Curacao. For more articles, see Curaçao (disambiguation) .

Curaçao [ kyʀaˈsaːo ] ( Dutch ) ( papiamentu Kòrsou ) is an island of around 444 square kilometers and, together with the minor island Klein Curaçao, a country of the Kingdom of the Netherlands in the Caribbean .

Curaçao is one of the three ABC Islands and as such part of the Caribbean Leeward Islands (southern Lesser Antilles ), which geologically belong to the South American continental plate .

The island is about 60 km away from the mainland (north of Venezuela and northeast of Colombia ). West of Curaçao is the island of Aruba , which until 1986 also belonged to the Netherlands Antilles, to the east of it the island of Bonaire . Along with these, Curaçao is geographically one of the Leeward Islands . To the south-east lies Klein Curaçao , an uninhabited island that is particularly popular with divers and has only one lighthouse .

The highest point is the Sint-Christoffelberg with a height of 375 m.

The islands of Aruba, Bonaire and Curaçao are also referred to as ABC islands because of their first letters .

In 2017, a total of 160,337 people lived on Curaçao. Most of the population is concentrated in the capital Willemstad and the urban area around the Schottegat in the central-eastern part of the island.

The population of Curaçao consists of a large number of ethnic groups . Most of the residents are descendants of formerly enslaved Africans. Around 6% of the population are of Dutch descent. Few of the islanders are descended from the Arawak Indians, the indigenous people when the island was discovered in Europe. There are also descendants of Sephardic Jews who fled the Inquisition from Spain and Portugal in the 17th century , as well as guest workers from Asia , South America and the Caribbean who were recruited by the oil industry . The citizens of Curaçao have Dutch citizenship and are therefore also EU citizens.

A family has an average of two children; Men live to be around 76 years old, women around 81 years old (for comparison the Netherlands as a whole: men around 79, women around 84 years). The level of literacy is high, around 96% of the population over the age of 15 can read and write.

The Dutch language is the official language, but Papiamentu (a Creole language with Spanish, Portuguese, Dutch and English elements) is also an official language and in practice is largely the dominant spoken language. Papiamentu is highly developed, for example there are numerous literary works. English and Spanish skills are common.

The island has been around since about 4000 BC. Populated by native American Indians . Another, more highly developed Indian culture emerged after a second wave of settlement around  1500 BC. Chr. The drawings are still visible on the Hatohöhle.

In 1499, under the leadership of Alonso de Ojeda , Spaniards landed on the island, which they initially called Isla de los Gigantes (Island of the Giants) , as they were impressed by the height of the Arawak who lived there . A few years later, the Spanish conquerors deported the native Indians to the mainland for forced labor. In 1527 the Spaniards began resettling. For the next few decades the island remained Spanish.

In 1634 an expedition led by Johan van Walbeeck conquered Curaçao for the Dutch West India Company . Under General Director Jacob Pieters Tolck, the island became the center for the Caribbean slave trade and remained so until the 18th century.

Sephardic families made up a large part of the island's elite in the 18th century; From the middle of the 18th century, Jewish merchants dominated trade. The Jewish families did not have their slaves circumcised, but rather baptized Catholics.

The island remained Dutch until the British occupied them during the Napoleonic Wars - much like South Africa and Suriname . In 1816 she came back to the Netherlands. After the British (1834) and the French (1848), the Netherlands abolished slavery on July 1, 1863 .

From the 1860s onwards, Curaçao lost its economic importance, which only increased again with the discovery of petroleum deposits in the 1930s. Today the economy is based on the five pillars of oil, port, tourism, offshore banking and limited local production.

The military importance of the strategic position of the island, which has the largest natural inner harbor in the western hemisphere, was again demonstrated in June 2006 when a major military landing maneuver took place on the island. Soldiers from France, Spain, the Netherlands, Great Britain and the United States took part in the exercise " Joint Caribbean Lion 2006 " .

In 2005, the people of Curaçao voted in a referendum on the future status of the island, with the majority opting for the status of an autonomous country within the Kingdom of the Netherlands:

The government under Gerrit Schotte was only executive in office from August 3, 2012. The parliamentary election was brought forward to October 19, 2012. A majority of MPs, however, called for Schottes to be replaced by an interim government. The Deputy Governor Adèle Van der Pluijm-Vrede then appointed Stanley Betrian as the new head of government on September 29, 2012 . At first, Schotte did not want to accept his dismissal and spoke of a "coup d'état" controlled by the Netherlands. While the population of Curaçao was divided in the face of the government crisis, the Dutch parliament signaled that it wanted to comply with a desire for independence. At the same time, the responsible Hague Minister Liesbeth Spies had it declared that the new government was formed in accordance with the constitution.

Curaçao lies in the direct area of ​​influence of the northeast trade winds . Since the island is too shallow for incline rain , the air masses bring relatively little rain to the island and since the rainfall on Curaçao is not regular, there are no permanent rivers on the island. There is a semi-arid daytime climate with an average annual precipitation of 550 mm and an annual average temperature of almost 28 ° C. The annual precipitation amounts are subject to very strong fluctuations with values ​​between 200 and 1200 mm.

Curaçao is an "island under the wind" outside the hurricane belt. The island is rarely hit by tropical cyclones. 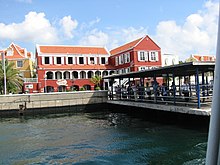 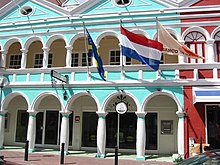 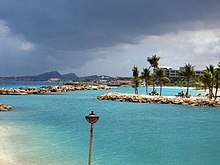 The island’s largest industries are tourism and oil refining . As early as the 1920s, the Dutch company Royal Dutch Shell built a port facility with an attached refinery ( Raffinaderij Isla ) in the Schottegat district, initially to supply the Caribbean islands with petroleum products; the crude oil required came from Venezuelan oil fields. The plants were continuously expanded and were leased to the Venezuelan state oil company Petróleos de Venezuela (PDVSA) until 2019 . The refinery produces 340,000 barrels of oil per day, which is exported to the US and various countries in South America. Furthermore, the role as an offshore financial center is of great importance. Since 2010 the Netherlands Antilles are no longer on the "black list" of tax havens in the USA.

Unemployment on the island is 10.3% (October 2008). Since October 2005, when unemployment peaked at 18.2%, the island's economic strength has recovered significantly. This resulted in more and more Antillianas returning from the Netherlands.

The official currency is the Antillean guilder ; due to the fixed exchange rate, payments can usually also be made in the US dollar . The euro is also often accepted in the tourism industry .

There are daily direct connections from Hato Airport to Amsterdam, Miami, New York, Sint Maarten, to various Caribbean islands and places in Venezuela and to Bogotá in Colombia.

From November 2011 to the end of September 2017, Air Berlin flew weekly non-stop with an Airbus A330-200 from Düsseldorf to Curaçao. The planes took off on Tuesday. This connection was the only direct connection from Germany to Curaçao.

Since November 2018, Condor has been offering a direct flight from Frankfurt am Main to Curaçao once a week .

More than 20 years ago, the underwater world around the island was placed under nature protection. This has made Curaçao and its neighboring islands a world famous diving area . In addition to soft and hard corals , divers can also observe numerous sponges , anemones , gorgonians , seahorses , scorpion fish , rays , barracudas , sharks , sea ​​turtles and cuttlefish . There are also some shipwrecks off the coast of the island that are easily accessible for divers. Probably the best known and most beautiful shipwreck is the tugboat. The roughly 9 meter long tug sank about 30 years ago. Since then, corals and small reef fish have taken over the wreck. It is close to the coast and only a few meters below the water surface, so that it is also easily accessible for snorkelers.

Information board in front of the historic liqueur distillery

From the peel of bitter oranges ( Seville oranges ) that grow on the island, named after the island will liqueur Curacao produced. The peels are macerated and soaked in alcohol , which dissolves the aroma and color. The liqueur is available either in a clear form or in the colors red, orange, green and blue. In addition to pure liqueur, you can also get mixtures with coffee, chocolate and rum in the liqueur factory. The liqueur produced on the island cannot be compared with what is usually called “Blue Curaçao” in Europe.

Seafood , Dutch and Creole specialties are on the table . Parilla de Marisco is a diverse seafood platter. From the Creole influences so the Stoba dishes, for dishes with a pot roast . For European palates, the Suppa Iguana, a clear soup with iguana meat, takes some getting used to.

The capital of Curaçao is Willemstad . Its inner city with the districts Punda (German: the point - from the Dutch “de punt”) and Otrabanda (German: the other side), Scharloo and Pietermaai houses many historical buildings of Dutch colonial architecture. These four districts are almost completely under the protection of the UNESCO World Heritage . The two districts of Punda and Otrobanda are connected by a pontoon bridge for pedestrians and cyclists, the Koningin Emmabrug , which is opened several times a day for ships entering and leaving the port. Car traffic has to take the detour via the 55 m high Koningin Julianabrug , which crosses the "Sint Annabaai" (St. Anna Bay) a little north of the historic old town.

Willemstad and its suburbs have around 120,000 inhabitants, which means that around 85% of the inhabitants of Curaçao live in Willemstad. The political center is in and around the historic government district in Fort Amsterdam in Punda. Punda and Otrobanda are also the centers for national holidays. King's day is celebrated on April 27th. On this day, the island, dressed in orange, meets in the city center, where a queens market with entertainment takes place and many local artisans offer their goods. On July 2nd, the island celebrates its Flag Day, with similar activities, only this time dressed in blue. The Kura Hulanda Museum , integrated into the hotel of the same name, documents the multi-century history of slavery in the West Indies in Otrabanda .

In the north of the capital, on the northern edge of the district of Biesheuvel, is the Egilio Hato Stadium, where the national soccer team of Curaçao plays its home games.

Sons and daughters of the island