The sea ​​turtles (Cheloniidae) represent in the narrower sense a family within the turtles . Together with the family Dermochelyidae (whose only species is the leatherback turtle ) they form the superfamily of the Chelonioidea , which are often referred to in German as sea ​​turtles in the broader sense; this then also corresponds to the intuitive interpretation as the entirety of the turtles living in the sea.

The group of sea turtles comprises a total of six or seven species that share a number of common characteristics. Their extremities are reshaped into large paddles with only one or two claws protruding from them, and their armor is clearly flattened and streamlined. Because the back armor does not completely ossify even in older turtles, the ends of the ribs protrude freely. There are also some regressions in the belly armor. By changing the shell, the sea turtles have also lost the ability to retract their relatively large head in case of danger. An adaptation to salt water are the salt glands , which fall constantly a concentrated salt solution deliver and so the salinity of the blood , regulate the kidney alone are not capable.

Way of life and habitat 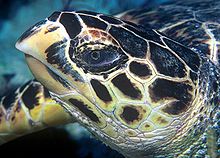 Sea turtles inhabit all tropical and subtropical marine areas and, apart from laying eggs, spend their entire life in the water. The first sea turtles likely evolved from terrestrial turtles around 200 million years ago.

Sea turtles feed on cephalopods , crabs , sponges and jellyfish , which they hunt on their long dives, as well as plants. Some species change the composition of their food with age, they become pure herbivores with age. Your metabolism is greatly reduced when diving, and the blood is enriched with CO 2 without harming the animals. As reptiles , they breathe the lungs and have to emerge after a while - about 5 to 40 minutes during activity, 4 to 7 hours asleep - in order to exchange the air containing CO 2 with fresh air.

Sea turtles are often not true to their location, they cover long distances every year on extensive migrations. They apparently follow the ocean currents , but an orientation using the earth's magnetic field or the angle of light is also being discussed. In order to get more precise information about this, marking programs have been running for some time in which sea turtles are equipped with transmitters and thus observed on their migrations.

The mating of sea turtles likely takes place in the open ocean . Then the females seek out the beach where they were born and lay their soft-shelled eggs there. Sea turtles only ever return to the beach where they were born, their life cycle is philopatric . Green sea turtles use the earth's magnetic field to find their mating and breeding grounds on Ascension Island. To do this, they only swim over 2000 km eastwards from the east coast of Brazil at night. When laying eggs, the female animals pull their fins over the sandy beach at night and dig a pit about 30–50 cm deep in which they lay the eggs. During this time her eyes water frequently, the function of the process is unclear. After the turtle has laid the eggs, it buries them and makes its way back to the sea. As a rule, all the females on a beach arrive within a few nights and lay their eggs; This is why the young animals hatch almost all at the same time, unless a clutch is the victim of a nest predator (e.g. monitor lizards, skunks or raccoons ) or humans. The sun incubates the eggs, whereby the temperature determines the sex of the young: females develop above 29.9 ° C, with lower males. Simultaneous egg laying and hatching ensures that the nest predators are usually full before too much damage is done, which means that more young animals survive (“predator saturation” or “ avenue effect ”). Other enemies wait on the way of the newly hatched young to the sea, especially seagulls and corvids . Another natural threat to the nests are violent storms, which often devastate entire beaches in tropical areas. In addition, humans unintentionally threaten them through streets, cities and other light sources. Since the animals that have just hatched naturally orient themselves towards the moonlight in order to find their way back into the sea, they are misdirected on their instinctive path by artificial light and perish. For many decades, next to nothing was known about the life of the young animals in their early years. It was not until 2007 that the Archie Carr Center for Sea Turtle Research discovered when studying the ratio of different isotopes in the shell of animals returning to shallower waters that the actually herbivorous turtles feed on jellyfish and other invertebrates that they feed during the first few years catch in the open sea.

All sea turtles are threatened with extinction . The only threat comes from humans, who have hunted them for centuries because of their meat, eggs and shell. The meat is particularly in demand in Asian countries, and trade bans, severe penalties and high black market prices hardly restrict trade. Turtle leather and tortoiseshell the tanks are also very popular, especially in Japan , where they are considered good luck.

An often neglected factor is the environmental pollution of entire marine regions and nesting beaches - for example from plastic waste in the oceans - which deprives the sea turtles of their livelihood. In a study of 102 sea turtles - including all seven species - from the Atlantic and Pacific Oceans and the Mediterranean Sea , microplastics were found in the intestinal contents of all animals. The vast majority of the amount absorbed consists of fibers made from synthetic polymers .

Modern fishing methods pose an additional massive threat that puts an end to thousands of sea turtles as bycatch in a crab or fish net . The TED nets (stands for “turtle excluder device”) developed in recent years for catching crabs are rejected by most crab fishermen because they fear that the crab harvest will be lost. Thousands of sea turtles die every year because they mistake plastic bags for jellyfish. All sea turtles are officially protected by the Washington Convention on Endangered Species . The trade in turtle products has been banned by the Convention on International Trade in Endangered Species ( CITES ) since 1979 , and they are prohibited from being caught and killed. However, all of these measures have a slow effect. Internationally, animal rights activists and organizations try to enforce the protection of animals by fencing and guarding breeding areas or building breeding stations. The island of Sipadan (near Borneo ), for example, was declared a nature reserve in 2004 and the tourist resort there was closed. Since then, the island has only been allowed to be entered during the day and only in certain places by a certain number of people, and it is no longer allowed to spend the night on the island. On the Turtle Islands , in the Sulu Sea , the number of nesting nests of green sea turtles found in 2011 was given as 14,220, with over 1.44 million eggs. In 2004, the lowest number of nest sites was found so far, a little over 4,000. This significant increase in the number of nesting clutches is seen as a success of the conservation efforts of the Philippines and Malaysia . Science makes a significant contribution to the protection of turtles, the knowledge of which about the behavior of the animals allows more effective protection.

In 2017, researchers analyzed data on all seven species of sea turtles and published the study of the success of decades of conservation efforts in the journal Science Advances . Result: The number of turtles is increasing in many areas. The team evaluated annual estimates of the nests over periods of six to 47 years for 299 populations. In 95 populations the number of animals increased significantly, but in 35 it decreased - also significantly. It stayed about the same for the rest. The main reasons for the rising numbers are likely to be the effective protection of eggs and females during egg-laying and the reduction in deaths from bycatch. At the same time, the researchers emphasize the importance of continued protective measures.

Evolution of the sea turtles

The sea turtles are descended from land or freshwater turtles that went into the water secondarily. This likely happened in the late Paleozoic . The splitting of the sea turtles and the formation of the Cheloniidae probably took place in the early Cretaceous (about 110 million years ago), but the fossil record for the turtles of this time is very sparse. For example, a single bone was found in the Hollekamp lime works in Münsterland . The earliest known representatives of the Cheloniidae apparently already had paddle-like extremities, but these were not as well developed as in today's species. According to the shape of the head, the salt excretion system via the salt glands already existed and may even have been developed by the terrestrial habitat before the final solution. The oldest known sea turtle until 2015 is the species Santanachelys gaffneyi from the early Cretaceous; however, it is assigned to a separate family called Protostegidae .

There are six or seven species of sea turtles, which are assigned to five genera. The species status of the black sea turtle ( C. agassizii ) has not yet been conclusively clarified.

The relationships between the species can be seen in the following diagram: