This article describes the material extracted from the back shield of turtles. For the fur color of cats see tortoiseshell (cat) .

A piece of tortoiseshell and jewelry made from it

The carapace of the green turtle ( Chelonia mydas ), hunted for its meat, was only used for the manufacture of lanterns because of its small thickness. The loggerhead sea turtle ( Caretta caretta ) and the hawksbill sea turtle ( Eretmochelys imbricata ), on the other hand, have horn plates that are clear, translucent and brightly colored (yellow, red, brown, black), flamed or cloudy. Therefore, they were only caught for their tortoiseshell.

Tortoiseshell ( ba-sig 4 ) was already imported from the Persian Gulf under the kings of Larsa . The letter UET V 678 from Ur mentions 30 pieces ba-sig 4 . The ancient Egyptians also used tortoiseshell, objects made of tortoiseshell were also found in Nubian graves.

In the 18th and 19th centuries, tortoiseshell was mainly imported to Europe from the Bahamas , the Antilles , the Cape Verde Islands and from Guyana . The Dutch trading company imported tortoiseshell from the West Indies and the Moluccas and Spain mostly from the Malabar Islands. Further occurrences were found at the time in Madagascar , China , New Guinea and the Bismarck Archipelago .

The tortoiseshell was extracted in the regions of origin and shipped to Europe. Whole shiploads could be destroyed by worm infestation, as this was greatly favored by the long transport routes and the lack of air supply or circulation. In the European ports - such as B. Marseille , Amsterdam and Hamburg - the tortoiseshell was then sold to dealers and artisans by the pound.

From the turtle shell, only the back shield was used, which consists of twelve panels arranged around a hexagonal center plate. In order to remove the coveted material from the turtle shells, heat is required. Writings from the 16th to 20th centuries indicate that living animals were placed in boiling water or held over a fire. The tortoise shell softened under this influence of heat and could thus be detached from armor with the help of a knife.

In the 18th century the meat of the turtles was not considered tasty. Since European hunters also believed that the tortoiseshell would regrow, if the animal survived the detachment process, it was released. In fact, it is found in Grzimek's animal life that the armor can almost be reproduced in quite young animals. 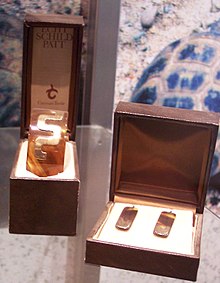 The tortoiseshell is very similar to the horn and, like it, consists mainly of keratin .

The thermal properties of tortoiseshell make processing possible in the first place. If it is still hard and brittle when cold (the Mohs hardness is around 2.5), it becomes elastic and malleable when heated. However, if it is exposed to excessive heat, it may lose its transparency.

A typical processing operation initially involves leveling the shield panels. The plates are heated in boiling water until they are deformed by their own weight. After softening, the panels are pressed, but must not cool down too quickly. For this reason, bags of hot sand or preheated metal plates were used for the pressing process. The plates are then left to cool under pressure. The plates prepared in this way must then be leveled, i.e. H. brought to a uniform strength. In this way the transparency of the tortoiseshell can be worked out.

If larger pieces of tortoiseshell are required, individual plates can be welded together using a combination of heat and pressure.

With the help of heated metal molds, the previously heated tortoiseshell can be shaped into different shapes. After it has cooled down in the molds, it retains its new shape.

After the tortoise shell has been processed, the individual pieces are glued onto a wooden support. The transparency of the material is often used and the tortoiseshell is backed with colored paper. In addition to enhancing the color impression, this had the advantage that the grain of the wood does not show through and the pattern of the tortoise shell is easier to see.

Threats to sea turtles and conservation

The hunt for sea turtles because of their tortoise shells was largely responsible for the collapse of the populations of some tortoise species in addition to the drowning of many animals as bycatch in fishing nets and the destruction of the habitat by building up coastal areas. Through the Washington Convention on the Protection of Species of 1973 (ratified by the Federal Republic of 1976), the species concerned were therefore placed under strict protection and trade in tortoiseshell was prohibited. However, tortoiseshell items can still be found in some tourist regions as souvenirs. Importing into Germany is prohibited and subject to a penalty.

Another form of species protection is the use of substitutes. Imitations of tortoiseshell used to be made shortly after it became fashionable by staining to produce similar colors and drawings on white horn, bone glue and even ivory .

When celluloid was developed, it was used as a substitute for both ivory and tortoise shell. Celluloid was later replaced by the newer Galalith and finally by modern plastics such as Rodoit (cellulose acetate).