The word China is derived from the Sanskrit word cīna चीन , which in turn goes back to the Chinese name of the state of Qin (778–207 BC) or the state of Jin (11th century – 349 BC). In the Middle Ages (around Marco Polo's times ), China was not known in the west as a unified cultural area. A distinction was made between northern China, which was called Cathaia, Kitaia, Khitai, Catai or Kitai . This expression is derived from the name given by the Kitan , who established the Liao dynasty in northern China in the 10th to 12th centuries . At that time, southern China was rarely known under the term Mánzǐ Mangi ( 蠻子  /  蛮子 ), which goes back to the derogatory Chinese term for the southern Chinese peoples - roughly comparable to the expression “ barbarian ” in the Graeco-Romanic culture.

The self-designation Zhōng guó ( 中國  /  中国  - "literally. Middle Kingdom") has been around since the 1st millennium BC. In use. It describes the original royal rule in the north Chinese central plain ( 中原 , Zhōng yuán ), which geographically represents the core area of ​​China and the cradle of Chinese culture .

Historical development of the cultural area

During the Qin dynasty of the first emperor Qin Shihuangdi , many things were unified and the foundations of a common cultural identity were created, including the Chinese script consisting of thousands of Chinese characters , which is considered to be the oldest writing system in use in the world. 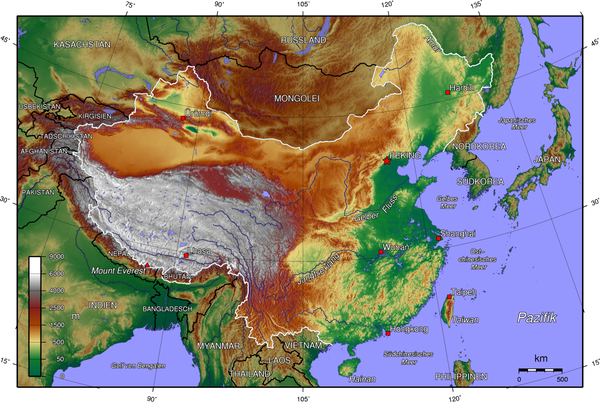 At 9.5 million square kilometers, mainland China is about the same size as the United States or all of Europe as far as the Urals . The north-south extension of China is 4500 kilometers; the east-west extension 4200 kilometers. The longest river in China is the Yangtze , at around 6,400 kilometers . With a total length of 22,133 kilometers, the People's Republic of China has the longest land border of any country in the world. The mountains in China cover two thirds of the country, the highest mountain is Mount Everest and at the same time the highest peak on earth.

The climate in China is more or less influenced by the monsoons (summer rains ), but the northwest half of the region is already quite strictly continental , and extends from the high-level summit region of the Himalayas to desert climates to the tropical and subtropical coasts.