Zhuang from Longzhou in Guangxi

Zhuang from Guilin in Guangxi

Ping An, a Zhuang village in the Longsheng region of Guangxi 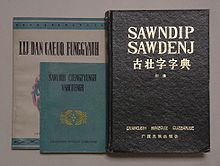 The Zhuang (in Zhuang Bouxcuengh , Chinese  壯族  /  壮族 , Pinyin Zhuàngzú ) are a Tai people , most of whom live in the Guangxi Zhuang Autonomous Region in southeast China. Together with the Buyi, Tay-Nùng and other Tai ethnic groups, they are also called Rau or Rao.

The Zhuang are one of the 56 officially recognized nationalities of China. With their 18,540,000 people (2016 census), they are the second largest people in China after the Han . Since the middle of the 20th century, a scientific discipline called Zhuangology or Zhuang customer has been concerned with the philology, history, language and literature as well as philosophy of the Zhuang.

In Vietnam and Laos live ethnic groups - each recognized as an independent nationality - that are linguistically and culturally diverse subgroups of the Zhuang in China. In Vietnam, these include the Tay (over 1.4 million people), the Nung (over 800,000 people), the San Chay (approx. 140,000 people) and the Giay (approx. 38,000 people). In Laos there are another 6,000 Giay.

The name Zhuang was previously written with the character 獞 ( Zhuàng or tóng , name of a type of dog). This alluded to the role of dog meat in the Zhuang diet. Because of the pejorative connotations, the radical "dog" on the left side of the sign was replaced by the radical for human being (僮) in 1949. This combination is also read zhuàng or tóng , but here, too, the meaning (house boy) caused little enthusiasm. Ultimately, a completely new character 壯 was chosen, which means something like firm or strong .

The Zhuang are descendants of the ancient Baiyue , a largely Taiwanese- speaking people in southeastern China.

The language known as Zhuang comprises a group of dialects that do not form a monophyletic unit. Since the exchange between the villages in the mountainous landscape of Guangxi was very difficult, the common vocabulary is limited in many cases. There are eight northern and five southern dialects. Some have more in common with Thai languages ​​than with each other. The language was originally written using Chinese-derived characters called Sawndip . There has been a script with Latin letters since 1975, but some intellectuals still use the old script, the history of which goes back at least to the 7th century.

In the 2016 census, 18,540,000 Zhuang were counted. Most of them live in the Guangxi Zhuang Autonomous Region (91.4%); but there are also larger Zhuang populations in the provinces of Yunnan (6.5%), Guangdong (1%) and Guizhou . In addition, Zhuang have settled in all major and minor cities in China.

Distribution areas of the Zhuang at the county level (2000):

Zhuang autonomy in the People's Republic of China