The title of this article is ambiguous. Further meanings are listed under Mengzi (disambiguation) . 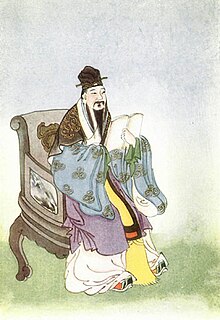 Mengzi ("Master Meng", Chinese  孟子 , Pinyin Mèngzǐ , Latinized Mencius or Menzius ; * around 370 BC ; † around 290 BC, i.e. during the Zhou period ) was the most important successor of Confucius (also Kongzi ). He reformed its philosophical direction and developed it further. So could Confucianism under the Han Dynasty to the Chinese state philosophy ascend. Mengzi's work is still very important today.

Mengzi was born in Zou (鄒), which is in today's Shandong , in a place very close to the birthplace of Confucius . His birth name was Meng Ke (孟 軻). Mengzi's father died very early and his mother Zhang (仉) raised her son on her own. The story is well-known in China that she changed her place of residence twice so that young Mengzi could grow up in an environment that was as beneficial as possible (孟母 三 迁, mengmu sanqian). At first the family lived next to a cemetery. Mengzi played near the graves and tried to re-enact burials. The mother then decided to move near a market square. But even this environment of business and market shouting seemed just as inappropriate for her son. Ultimately, his mother moved next to a school.

At that time it was customary for the rulers of the individual empires to bring scholars to their court for entertainment. The princes found it entertaining to discuss philosophical topics with the scholars. Similar to his role model Confucius, Mengzi traveled from empire to empire in order to spread his ideas and teachings. Mengzi, however, tried primarily to influence the respective princes who were to implement his teachings. Mengzi's philosophy is therefore very practical.

Like Confucius, Mengzi toured China for forty years and offered his advice to the rulers. He served as a civil servant from 319 to 312 BC. In order to fulfill his obligations as a son, he suspended his public office for three years when he had to mourn the death of his mother. Disappointed that his reform efforts had such little impact, he withdrew from public life.

Mengzi differs from his predecessor u. a. by the statement that an unjust rule by the subjects may be ended, the so-called principle of Gémìng ( 革命  - "change of mandate, revolution "). Mengzi takes a positive view of man , he is convinced that man is naturally good and only the environment and emotions remove him from it. His views on environmental protection are similarly radical . This is his advice to rulers:

It is mainly due to the work of Mengzi that Confucianism was able to prevail after the death of Confucius in conflict with other philosophical schools such as Daoism or Mohism .

While Confucius did not speak explicitly about the essence of human nature, this topic is one of the most important in Mengzi's philosophy.

Mengzi basically assumes that human nature is good (性善, xìngshàn). This thesis was later to be criticized by Xunzi , who took the view that humans are inherently bad (性惡, xìng'è). Mengzi justifies his hypothesis first of all by stating that all people are similar to one another because they belong to the same species. He argues with the human senses. All people thought similar food was tasty, the eyes all perceive similar things as beautiful and the ears also all like to hear similar sounds and music. Mengzi then adds the rhetorical question of whether it could then be that people are so different only in their minds.

He then tries to explain why people are so similar and explains reason ( 理 , lǐ ) and righteousness ( 義  /  义 , yì ) (sometimes also translated as duty ) as the underlying principles.

Mengzi continues in Chapter 2A6 and explains that there are four basic predispositions to be found in every person:

These in turn lead to the four human virtues:

The compassion that leads to the other three is presented as highlighted. Mengzi presents his claim that compassion is innate with the help of a picture of a child about to fall into a well. He explains that everyone feels anxiety, grief and pain in the face of this scene. Thoughts of a possible reward for the parents or a higher reputation in the village played no role. Rather, the observer has no ulterior motives. Mengzi concludes from this that man has the faculty of compassion from birth.

For Mengzi, humans are both selfish and altruistic . The good nature common to all, however, exists from birth. However, external influences and conditions can lead to differences and change the originally good properties. This is what makes people bad. These external circumstances are related to the time, the historical circumstances and also the current economic conditions.

In addition , if people do not use and exercise them constantly, people also lose their innate goodness . Man also receives a certain moral refreshment from sleep. He regenerates at least partially. However, this regeneration is usually not enough to compensate for the bad influences that have accumulated over the day. Mengzi's idea of virtue has certain parallels to sport. He cannot lose it completely, but regular training is essential. It is necessary to curb one's desires and passions. If one acts like this, one gains “ equanimity ” and “ peace of mind ”. Mengzi claims to have achieved this at the age of 40.

For Mengzi, education probably plays the most important role in finding one's way back to a good moral condition, which is what he says in the statement “The goal of studying is none other than the search for the lost heart.” (學問 之 道 無 他 ， 求 其 放心而已 矣 。Mengzi, Chapter 6A11) tried to express. For him, the ability to learn is the only difference between humans and animals. Only then does a person become a person.

Mengzi opposes the utilitarianism of the Mohists . He also justifies this with his theory of the four innate abilities or virtues. Since they are there from the start, they must not be exercised in order to only earn material profit. Mengzi sees the situation the other way round: If people behave virtuously according to the principle of righteousness (义), profit will come automatically, just as an artist primarily creates a work of art and expresses the ideas and feelings of the artist himself. It is only as a by-product that the viewer likes it.

Mengzi, however, nowhere in his work defines the exact difference between profit and righteousness. Nevertheless, one can generally assume an attitude against pure utilitarianism, which is clear from the example of his statements on burials. While the Mohists are more satisfied with rather simple burials, Mengzi speaks out in favor of a greater honor for the dead, because only this really makes the bereaved happy.

Important English translations are from DC Lau and James Legge .