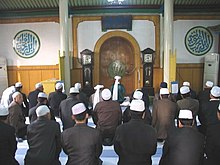 Hui Chinese praying in the mosque 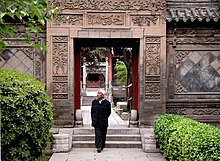 Hui in the Great Mosque of Xi'an

The Hui ( Chinese  回族 , Pinyin Huízú ) are one of the 56 nationalities of China that have been officially recognized as independent peoples. The Hui are similar in their culture and many in their appearance to the Han Chinese , with the exception that they are Muslim and therefore have some religious customs and traditions. The 2010 census counted 10,595,946 members of the Hui nationality. The roughly 20,000 Hui in Hong Kong and around 100 in Macau are not counted. The approximately 52,000 Hui in Taiwan are not recognized by the government of the Republic of China as a nationality, but rather as Han Chinese of the Islamic faith. 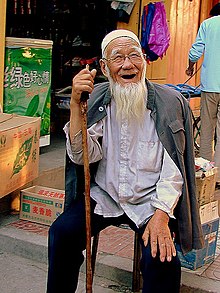 Hui-Chinese with the typical headgear

The Hui also include various smaller Muslim ethnic groups that could not be assigned to any of the other large Islamic peoples of China ( Uyghurs , Kazakhs , Kyrgyz , Dongxiang , Salar , Uzbeks , Tatars , Tajiks and Bonan ), but were too small or too complicated to be to recognize them as their own nationalities. A special feature of the Hui is that they are scattered all over China, but locally concentrated in "Hui districts" or "Hui villages", mostly around the mosque. The respective local groups of the Hui often differ significantly from one another, especially with regard to their origins and history. In the north of the city of Dezhou (northwest Shandong ) there is a small village called Beiying, in which 710 Hui (1990) live, the predominantly descendants of two sons (Andulu and Wenhala) of a king of the indigenous people from the Sulu Islands (today's Philippines ) are. The Sulu king had been on a state visit to the court of the Ming Dynasty in Yongle 15 (1417) with a delegation of 340 people and died on the way home in Dezhou. His two younger sons stayed at the grave, entered into marriages with three local Hui families, Xia, Ma, and Chen, and established the An and Wen families. In Yongzheng 9 (1731), their descendants, which had grown to 193 people, were granted Chinese citizenship by the Qing Emperor. 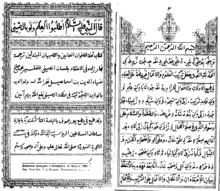 The Hui mostly speak Chinese in the local dialect and / or languages ​​of the local ethnic minorities. In the religious field there is an extensive vocabulary of Arabic, Persian and Turkish origin. The Northwest Chinese dialect used by the Hui in Shaanxi , Gansu and Ningxia , Xinjiang and z. Some also speak in Qinghai , is called Dungan (東 干 語) in Kyrgyzstan , Kazakhstan , Uzbekistan and Tajikistan . Over 100,000 Hui live there under the name of Dungans .

In Lhasa and a few other places in Tibet , in the Dêqên Autonomous District of the Tibetans in Yunnan Province , and in the Dehenglong and Ashinu communities in the Hualong Hui Autonomous County , Qinghai Province, a total of almost 15,000 Hui who speak Tibetan (藏語) live.

Several thousand Hui, who call themselves Tuomao (托 茂 人), live in the Tibetan Haibei Autonomous Region and the Xinjiang Uyghur Autonomous Region. They speak Oirat- Mongolian . The approximately 4,500 Utsat-Hui in Sanya on the southern tip of Hainan are descendants of Cham immigrants who came to China from Vietnam at the end of the 12th or beginning of the 13th century . They speak Tsat (回 輝 語), an Austronesian language that is one of the Cham-Achin languages ​​of the western Malayo-Polynesian language family . Almost 600 Hui, called Paxi-Dai (leben 傣), live in the Dai Autonomous District of Xishuangbanna . They speak Dai, a southwestern Tai language. Another 6,000 Hui in Eryuan County, Dali Autonomous District of Bai speak Bai , a Sino- Tibetan language. 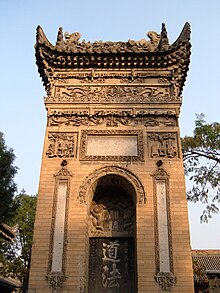 Among the Hui of northern China there are strong influences from the Central Asian Sufi schools ( Tarīqas ) such as Kubrawiyya , Qadiriyya , Nakschibendi ( Chufiya and Jahriya ) etc. mostly the Hanafi Madhhab , while the Shafii Madhhab is more common among the southeastern communities . Before the Ihwani movement , the Chinese variant of the Salafism movement, the northern Hui liked to merge Taoist ideas and martial arts practices with Sufi philosophy.

Southeastern Hui have a long tradition of merging Confucian teachings with Sharia and the Koran . The contributions of the Muslims of Southeast China to Confucian officialdom are documented as far back as the Tang Dynasty .

Among the Hui, women also serve as ahong ( imams or Muslim religious leaders). They work as spiritual guides for women ( nü ) in their community. Some of these nu ahong serve in mosques that are completely separate from mosques for men, but mostly rooms that are part of mosques for men are used by women. Some nü ahong live in the mosque or in affiliated Muslim schools. Some of them also receive a salary, only a small number work on a voluntary basis. The anthropologist Maria Jaschok estimates that there are about seven times as many prayer rooms and mosques for men as for women. Different definitions of “ women's mosque ” and the lack of statistical data make it impossible to make a precise statement about the number.

In addition to chairing the nü si (women's mosque), a nü ahong also has the task of offering ritual and moral guidance, attending marriages and funerals, preaching, resolving political and social conflicts and advising. She also serves as an educator. There are many schools for Hui women and girls run by the mosques and financed by Hui.

The Hui Chinese are mostly Han Chinese who adopted the Islamic faith. But some have different origins. Some on the southeast coast are descended from Arab traders who settled in China since the 9th century and, over time, adapted and mixed with the native population, and ultimately only kept the other religion. There is another explanation of ancestry for the Hui of Yunnan and northern China who speak the northern Chinese dialect : parts of their ancestors were Mongolian , Turkic and other Central Asian settlers.

Until the early modern times, the northern Chinese Hui villages were called "Blue-cap Huihui", "Black-capped Huihui" and "White-capped Huihui" in order to differentiate them with regard to their possibly Christian, Jewish or Islamic origin, although even then Hui North China were overwhelmingly Muslim.

The Central Asian Turkic peoples and the Tajiks refer to the Hui Chinese as Dungans . In Thailand , Chinese Muslims are called "Chin Ho", in Burma and Yunnan "Panthay". There are some Chinese Muslims or Chinese who have converted to Islam in Malaysia . These are officially counted as part of the " Bumiputra ", the dominant Malays. However, in society they are seen as part of the Chinese minority.

Distribution of the Hui Chinese at the provincial level according to the data of the 2010 census (reference date November 1, 2010) 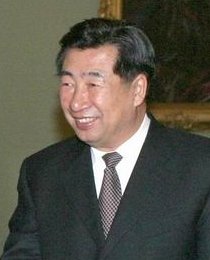 Flag of the "Sultanate" of the Xibei San Ma, which was autonomous until 1949

Three Hui warlords known as the Ma clique (Xibei San Ma) ruled most of the Chinese provinces of Ningxia , Gansu and Qinghai , especially in alliance with the Kuomintang from 1912 to 1949 .

Hui autonomy in the People's Republic of China