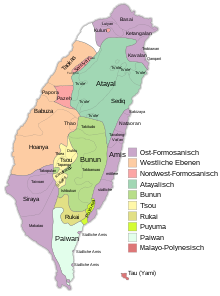 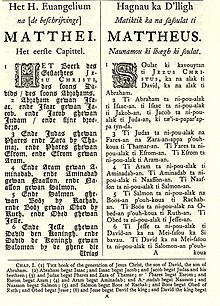 The Siraya are an indigenous people of Taiwan who were first described by the Dutch in the 17th century .

They live in the flat southwest of the island in the area of Tainan and are largely sinized today . Nevertheless, they have been striving for official recognition for a number of years, and their ethnic identity is in a dynamic process of reconstruction.

The Siraya spoke their own language, which was one of the Austronesian languages . The Siraya has been considered extinct for over a hundred years. It is now only accessible through materials from 17th century Dutch missionaries.

The Siraya lived from agriculture . Their primary food crops were millet and rice , which were supplemented with fruits and vegetables. In addition, there was the catch of fish and seafood and hunting. No stocks were created, but only as much was planted or collected as the respective village community needed to live.

Most of the food production was organized, administered and distributed by the women. The men helped when they weren't on one of their sporadic headhunter feuds. The land belonged to the women of a large family (clan).

Agriculture was based on slash and burn . When the soil was exhausted after a few years, it was left fallow and the village was relocated a few kilometers further.

The Society of Siraya consisted of clans / clans who cite each to a common ancestor. Up to four generations of a mother lineage lived together in a long house , i. H. Grandmother, mother, daughter and granddaughter as well as brothers, uncles and sons. The so-called visiting marriage prevailed : husbands did not live with their wives, but worked in their own extended families. They visited their wives at night, but left them at dawn without a meal. Spouses were economically independent from each other and in no way bound by any obligations or rights. Children remained in the woman's extended family.

Marriages were quickly arranged and just as easily broken up. In order to get married, a man asked his mother or sister to please go to the mother's clan of the elect and give a gift there. If the woman's family agreed, she accepted the gift, and the wedding was "legal" without further ceremony: the man was allowed to visit the woman during the night until either he or she no longer wanted to.

At the time of the Dutch missionaries in the 17th century, the Siraya operated a simple type of birth control : clan mothers, men's councils and shamans had decided that a woman could only bear a child after the age of 30. If a woman became pregnant earlier, the child was aborted.

According to the descriptions, the Siraya knew no permanent leaders or chiefs. The Dutch missionary George Candidius complained about this fact several times in a letter from 1630, since he could not convert entire villages simply by ordering a converted leader. He saw it as an obstacle that every Siraya was free to believe and do what he wanted.

The main social differentiator was not rank, power, or property, but age. Each village, consisting of several extended families, had a council of elders. However, he had no executive power, could not give instructions or orders. The council of elders, which consisted of about twelve elected men, discussed any problems that might arise, looked for the best solution, and then proposed it to the assembled village, which in turn discussed the advantages and disadvantages of the proposal. Nobody had to submit to the decision - everyone judged for himself whether he accepted the proposal or not.

The case law was based on compensation that was negotiated through intermediaries or directly between the parties involved. In addition to the men's council or the council of elders, the assembly of shaman women had a great influence.

The Siraya worshiped a goddess Takangpada who lived in the east and her companion or brother Tamagisangach who lived in the west. In addition, each village community had its own holy place where they made offerings to their ancestors. The inibs , the shamans of the villages, were the bearers of the religion . The Siraya do not seem to have known any formalized cult - each shaman created rites as she saw fit. The religious knowledge was passed on orally.

Fall of the Siraya

When the Dutch colonial rulers came to Taiwan, the indigenous peoples already had a territorial problem and were trying in various ways to get a grip on population growth. The Siraya and other ethnic groups on the flat part of the island fought each other in local feuds that included headhunting .

Both the Han and the Dutch colonial rulers viewed the Siraya as inferior barbarians who had to be "civilized". This happened in particular through the efforts of Christian missionaries , but also through skillful exploitation of the already existing rivalries between the indigenous peoples of Taiwan.

The missionary Candidius, whose letters have been preserved, described how the ritual sites where the Siraya worshiped their ancestors were destroyed. The missionaries convinced the colonial administration that the female shamans were a particular obstacle to conquering the island: “Your priestesses [...] are old women who say the exact opposite of what I teach the people. They will not allow the old braid of their superstitious worship or practices to be changed or made contemptible, ” wrote Candidius.

After the colonial administration had removed about 250 female shamans from the villages and sent them into exile, it was easier for the missionaries to implant their Christian (moral) ideas in the Siraya and thus undermine the Siraya culture. Abortion was banned, premarital and conjugal sexual freedoms were restricted, and monogamous marriage was introduced. The latter, in particular, tore the extended families, which previously represented the basic cells of the Siraya culture, apart. The traditional division of labor between the sexes was also abolished: with the introduction of patrilineal small families, men now also worked in agriculture, and according to Dutch law, the land belonged to the man, not the mother's clan. In addition, there was a sharp increase in population, which led to further social and ecological problems.

The Dutch appointed a “chief” in each village who was to act as a representative of the colonial administration and to implement their will in his village. Any dissatisfied man was selected for this purpose, but who had previously proven himself in feuds or otherwise. From then on, “his” village owed obedience to this. The "chief" was given a Dutch flag and a velvet coat and had to swear obedience to the colonial administration. In addition, a number of laws were passed that destroyed the livelihoods of the Siraya: They were no longer allowed to found new villages when the population increased and, if the soil was depleted, they were no longer allowed to settle elsewhere. If the Siraya violated these instructions, the colonial rulers imposed drastic penalties, which had to be carried out by the "chiefs" or other people from the Siraya people. Further penalties were imposed if the Siraya (and other indigenous peoples) prevented the Han from settling on their land or in their villages, or from hunting in their forests. The punishments consisted of the devastation of the houses and fields of a village or the heads of “rebels”.