The Mermithidae are a family of roundworms (Nematoda). These are very long and thin worms that parasitize insects and other invertebrates such as spiders , crustaceans and leeches . The main hosts are insects and here Mermithidiae occur in representatives of at least 15 orders.

Features and way of life

They are very similar to the string worms (Nematomorpha) both in their way of life and in their appearance . They do not have a continuous intestine and, like the string worms, the food is absorbed through the body wall. After the juvenile phase, the adult worms often leave their host and live in moist soil or in bodies of water where they mate. 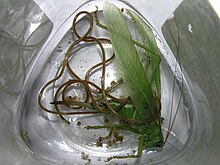 Mermithidae occur in insects at all life stages from larva to imago . They live in the body cavity and feed on nutrients in the insects' blood. In the host, the worms can grow from 0.5 to about 10 millimeters, but animals with a significantly greater length of up to 20 or 50 centimeters are not uncommon. In many insects, including mosquitoes and black flies , the worms can be found in large numbers, which makes them of interest for biological pest control.

Within the crustaceans, primarily land-dwelling crabs such as woodlice or small freshwater crabs such as Gammaridae are attacked; marine crabs are very rarely hosts for the worms.

Within the family, over 50 genera were distinguished, some of which, however, are only described on the basis of individual finds or larval stages. In the Integrated Taxonomic Information System (ITIS) the following 20 categories are named:

The genus that gives it its name is the genus Mermis .