The crustaceans (Crustacea) or crustaceans with at least 52,000 recently known species form a sub-tribe within the arthropods , which are characterized primarily by a large variety of forms as an evolutionary adaptation to different habitats and ways of life.

Because of the variety of shapes, it is often difficult to find individual features to differentiate between groups. The number of antennae (two pairs, which is why they are sometimes also referred to as diantennata ) and the gills are obvious differences to the hexipods and myriapods , with which they are usually combined to form the mandibular animals or mandibulata . However, these features are plesiomorphies , i.e. features that they inherited from their ancestral form and that have only been lost secondarily in the other groups. The possession of a typical split bone in crabs must also be regarded as an old feature , since the trilobites known as fossils already had these extremities. The common features of almost all crustaceans are the special shape of the larva ( nauplius larva ) with typically three extremity-bearing segments and the typical unpaired nauplius eye, the correspondence of the excretory organs as special, sac-like structures at the base of the antennae and maxillae, and a largely matching pattern of division of the cells in the germline .

As with all arthropods, the body of the crayfish consists of a number of segments bounded by a non-segmental head section ( acron ) at the front and an end section ( telson ) at the back . Due to the various specializations and the associated changes in the body structure of the animals, there are many variations of this basic plan. Significant changes affect the extremities (modification of the split bone into special structures such as mouth parts , suction cups , genital organs, etc.) and especially the merging of individual segments into larger body sections, which are known as tagmata . In the basic plan, a head area ( cephalon ), which probably consists of the acron and six fused segments, is followed by two body sections with an alternating number of segments, which are referred to as the trunk (thorax) and abdomen ( abdomen or pleon ). The segments that are characterized by extremities are summarized as the trunk. Abdominal segments do not have any extremities or they only have very different extremities. In addition, there is often a further fusion of the head with several trunk segments, which is referred to as the cephalothorax, remaining trunk segments in this case form the peraeon . 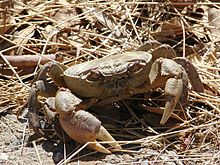 The development is similar in most groups within Cancer. They usually go through several larval stages in which new segments and the associated extremities are regularly attached by sprouting (anamerism). All crustaceans (with the exception of tongue worms ) form the nauplius larva typical of crustaceans as the first larval stage ; this stage can, however, also take place in the egg. From this basic larvae then form different types of larvae within the various groups (for example Copepodid or Zoëa larvae ), which then grow into adult crabs with or without metamorphosis .

With a few exceptions, crabs can be found in the water; they have populated all habitats of the sea and fresh water . Among the crabs there are also some species that can live on land, such as the palm thieves among the hermit crabs or the beach crabs . However, these species are still dependent on water, at least for development. The only ones that can live permanently on land are the landlice .

In water they can be found in every habitat that the sea or fresh water offers. Many species live as plankton in the pelagic (open water), others colonize the water floor, rock crevices, reefs or surf zones . Even under the Arctic and Antarctic ice, they are abundant and their presence in the vicinity of hot springs ( black smokers ) in the deep sea is also documented. A number of species also live parasitically in and on fish , other crustaceans and also in terrestrial vertebrates .

As with most other arthropods, relatively little is known about the evolution of crabs. The first crab fossils are known from the Cambrian , when representatives of the ostracods (Ostracoda) and the higher crabs (Malacostraca) occurred ( Cambrian explosion ). The first forms of cancer probably resembled today exclusively in brackish water caves occurring Remipedia . However, there is no fossil record of these. The leaf crabs (Branchiopoda) have been recorded since the lower Devonian , the barnacles (Cirripedia) since the Silurian .

The mussel crabs, whose shells often found in sedimentary rocks , are important key fossils, are of particular importance as fossils . They have been an important part of zooplankton since they first appeared in the Lower Carboniferous . Also relatively common fossils are those forming part of the barnacles barnacles (Balanidae) and barnacles found (Lepiidae).

Representatives of important groups of crustaceans. Horseshoe crabs (bottom right) do not belong to the crabs, but to the jaw-claw carriers .
From Meyer's Konversations-Lexikon (1885–1890)

Commonly, the crustaceans are regarded as the sister group of the tracheal animals (tracheata; insects and millipedes), however various authors assume that the insects and millipedes are also independent groups within the crustaceans; this is primarily discussed at the level of embryonic development. The tongue worms ( pentastomida ), which used to be classified as a separate strain , are now almost certainly also classified as cancers, primarily through molecular genetic comparisons and ultrastructural studies of the sperm structure.

whereby the "Maxillopoda" are very controversial. In the opinion of a large number of authors, the latter is only a summary of all the taxa that do not fit into the justifiable monophyletic groups. For this reason the “Maxillopoda” are treated here as a formal group and are placed in quotation marks.

The kinship relationships within Cancer are still largely unclear and the subject of controversial discussions. Many new finds such as that of the cave-dwelling Remipedia , the Facetotecta known only as larvae (Y larvae) or the microparasites of the Tantulocarida group, as well as the dissolution of previously established taxa such as the "Cladocera" as a paraphyletic group into several sub-taxa have also not contributed to the clarity.

The relationship between the classes is also controversial. There are two concepts.

In the Malacostraca-Entomostraca concept , the Malacostraca, the "higher crabs", are the sister group of the "lower crabs" (Cephalocarida, Branchiopoda and "Maxillopoda"). Because of their legless abdomen and palpeless mandibles, these are grouped together as the monophyletic taxon Entomostraca.

Fiddler crab , a representative of the "higher crabs"

In the Maxillopoda-Thoracopoda concept , the "Maxillopoda" are the sister group of the Thoracopoda (Cephalocarida, Branchiopoda and Malacostraca). The thoracopods ("pectoral feet") are characterized primarily by their filter apparatus formed from the trunk extremities. Their trunk extremities (thoracopods) lost their segmentation and turned into leaf bones (phylopods).

Copepod , a representative of the "Maxillopoda"

More recent analyzes no longer use the collective taxon “Maxillopoda”, but assume eleven crustacean classes. For the followers of the Pancrustacea theory, the six-pod (Hexapoda) including insects are added as the twelfth grade . The possible relationship shows the following cladogram : 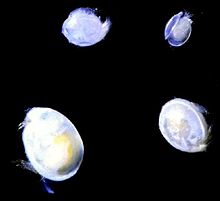 Ecological and economic importance of crabs

In marine and limnic ecosystems , crabs, especially the small crustaceans of the zooplankton ( water fleas , copepods , krill crabs and others), occupy a key position. As consumers , they feed on the plant plankton of the sea and fresh water and thus regulate plant growth. In terms of species and individuals, they make up the largest proportion of zooplankton, and their share in this regulation is correspondingly large. At the same time, however, the zooplankton also directly or indirectly provide the food basis for all large organisms (fish, marine mammals , cephalopods, etc.) in the oceans and freshwater, as they are either eaten directly by them or serve as food for larger prey.

Some types of crustacean also serve as a direct source of food for humans. The larger crabs such as prawns , lobsters , crayfish and lobsters are popular “ seafood ”. Crustaceans are often caught with the crab basket , a special trap for these animals. Some species are now being bred commercially in shrimp farms , a special form of aquaculture .

Much greater, however, is the importance for people in cleaning drinking water supplies . The small crustaceans filter suspended matter, bacteria and protozoa as well as toxins bound in them from the water of the reservoirs. The material damage by fouling (overgrowing of hulls with barnacles and barnacles , characterized an increase of the weight and driving resistance), wood damage by Bohrassel provides other hand, only a relatively small load on wood structures such as webs or the like is.