Centipede is a redirect to this article. Further meanings are listed under Centipede (disambiguation) .

Millipede, close-up of the head area, which is very important to determine 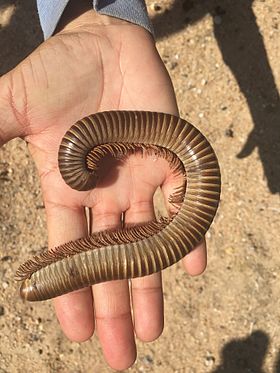 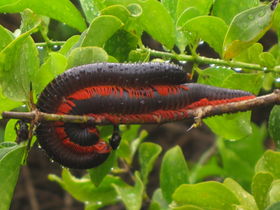 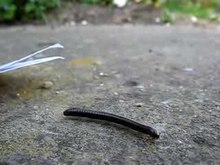 The millipedes (Myriapoda; also millipedes ) are a sub-tribe of the arthropods (Arthropoda). They exclusively include rural forms with a mostly two or three-digit number of legs.

Sometimes the term millipede in a narrower sense is limited to the class of mostly herbivorous bipedes , which make up the majority of the group with around ten thousand known species. Three thousand known species include the carnivorous centipede . There are also the smaller groups of dwarf pods and petty pods .

Burrow of the millipede

Millipedes have a body that is divided into two sections ( tagmata ): a head capsule, which consists of several segments fused together, is followed by a trunk with a similar (homonomous) structure with at least four leg-bearing segments.

The head capsule of the millipede has a pair of antennae and two or three pairs of mouthparts attached to it. The antennas are limb antennas in which each limb has its own muscles. The antennae of the Chilopoda and Symphyla are simple and little modified. The diplopods have characteristic, angled (kneeled) antennas made up of eight segments, the last link of which has four large sensory cones. The antennae of the pauropods are split with several antenna flagella. The antennae are followed by a limbless segment (intercalary segment), which corresponds to that of the second antennae of the crustaceans. The oral cavity begins with an - often toothed - upper lip (labrum) that closes it off at the top, followed by a pair of mandibles and two pairs of maxillae . Diplopoda and Pauropoda have only one pair of maxillae, here called Gnathochilarium. Here either both pairs of maxillae have fused or one has been completely lost. In the Symphyla the pairs of maxillae are quite similar to one another. In the Chilopoda, the second pair of maxillae is elongated and similar to a leg. In the Pauropoda, the mouthparts are more or less reduced and simplified.

The structure of the mandibles is characteristic of the millipedes: the mandible is almost always divided into two mutually movable sections (in the Diplopoda even three). The tentorium , a skeletal structure sitting inside the head, is involved in the movement of the mandible . The muscles that contract the mandibles ( adductors ) do not start on the mandible itself, but on the tentorium, which forms a joint with the base of the mandible. It consists of two movably mounted longitudinal struts that are connected by a crossbeam. The mobile, swinging tentorium is not found in any other arthropod group.

Eyes are developed in many Chilopoda and Diplopoda, while Symphyla and Pauropoda are always eyeless. The structure of the eyes is quite different from one another. Many Chilopoda (Lithobiomorpha, Scolopendromorpha besides Cryptopidae, Craterostigmomorpha) have a different number of single-lens, button-shaped ocelles . The Scutigeromorpha have real complex eyes , which differ in their fine structure from those of the insects and crustaceans. The Diplopoda have complex eye-like eye fields made up of numerous ommatidia, which are arranged in rows. When the juvenile stages are molted, a row of eyes is added in each stage. The ommatidia also differ significantly in their fine structure from those of the Tetraconata (insects and crustaceans); in particular, they do not have a crystal cone, but instead have a strongly thickened lens (cornea). Whether one regards these eye shapes as modified, reduced formations arising from complex eyes, or as independent parallel developments derived from the same basic shapes, depends on the hypothesis about the relationship of the millipedes.

The uniform section of the trunk with numerous pairs of legs is the most striking feature of the millipede. In fact, the body of the various classes of millipedes is constructed differently. The body is flattened or round. On the upper side (dorsal) of the Chilopoda and Symphyla there is a series of often somewhat overlapping back shields (tergites). In the Chilopoda, a short and a long tergite always follow one another in a characteristic sequence (exception: seventh and eighth tergite, which are both long). The tergites of the dwarf pods are shaped differently, often crescent-shaped or drawn out in triangular tips at the back; in some ground-living forms they are partially reduced and divided into two pairs of plates lying next to each other. In some segments they are often split across and broken up into pairs lying one behind the other. In the Diplopoda, two successive segments are fused to form a double segment (with two pairs of legs), in most (the Helminthomorpha) the body is surrounded by almost closed rings armored by calcium carbonate, which are only interrupted by the rows of legs.

In principle, each segment carries a pair of legs. However, the first and last segments are often different. The first trunk segment of the Chilopoda is attached to the head. This segment carries mighty pairs of legs, known as maxillipedes, which have poisonous claws and are used for (predatory) nutrition. In many species of the other groups, however, the first segment has no or greatly reduced pairs of legs. Very often one or two segments sit at the end of the body without any extremities.

The legs are either sideways (Chilopoda) or on the abdomen (Diplopoda) of the trunk. The legs are divided into six or seven segments, named coxa - trochanter - prefemur - femur - (post femur) - tibia - tarsus. The Diplopoda have one link, the post femur more. Their angled legs form a knee-joint-like hinge. In addition there is a pretarsus, on which a single (unpaired) claw is usually located.

About the number of legs

As the name suggests, some species of millipedes have large numbers of legs - most of them, 750 legs, were counted in the species Illacme plenipes . The literal millipede does not exist. However, not all species have a large number of legs. The most primitive, systematically most basic groups in particular have relatively few pairs of legs. It is therefore assumed that the high number of legs may not represent a primitive, but rather a characteristic acquired later in evolution. The question is difficult to decide, as no fossils of representatives of the parent group millipedes have been found to date.

The millipedes have different developmental paths in different groups:

There are two different ways of anamorphosis:

In species with euanamorphosis, there is no fixed number of legs, this is different for different individuals.

The following groups can be distinguished among the millipedes:

With species of the genus Scolodendropsis (Chilopoda, Scolopendromorpha) it could be shown that closely related species in the same genus have 21 or 23, sometimes 39 or 43 pairs of legs; the assumption here is that the number of segments has doubled as a result of a single mutation.

The situation is made even more complicated by the fact that the number of legs, dorsal plates (tergites) and other segmental structures of different Myriapods do not have to match. In the Saftkugler Glomeris , the dorsal and ventral sides evidently develop independently of each other in the embryo, so that there is no need for a fixed number of segments that would be common to both.

Systematics of the millipedes

Traditionally, the through were tracheal breathing Millipede with the Sechsfüßern (whose main group, the insects are) as Tracheentiere summarized. However, this did not withstand later investigations.

More recent work on the morphology, especially of the nervous system, the fine structure of the eyes and numerous molecular pedigrees (based on homologous DNA sequences) have clearly shown that the Hexapoda (including insects) and the crustaceans (Crustacea) represent a common line of descent is usually named "Tetraconata" after the construction of the eyes. Accordingly, as had been assumed almost certain for decades, the millipedes and the Hexapoda cannot be sister groups. This grouping, which was called trachea animals (Tracheata, also "Atelocerata") after the respiratory organs , appeared to be well founded beforehand according to morphological criteria. Of the meanwhile dozen of molecular studies, comprehensive and methodologically more and more sophisticated, not a single one has confirmed this. The common features of the millipedes and the Hexapoda are therefore with a high probability convergent formations, which are mainly connected with the transition from aquatic to terrestrial forms. If the Hexapoda are not the sister group of the Myriapoda, there is no longer any justifiable doubt about the monophyly of the millipede. Accordingly, contrary to a theory of the zoologist Otto Kraus that was prevalent for some time , the monophyletic community of Myriapoda is assumed by all modern authors.

There are still two hypotheses about the actual sister group relationship of the millipedes. Most scientists believe that the millipedes, Hexapoda, and Crustacea together form a group named Mandibulata . This is supported by numerous morphological arguments, for example the structure of the mouthparts and the nervous system, as well as a number of molecular studies. However, many other molecular studies also suggest that the jaw-claw bearers (Chelicerata; mainly includes arachnids ) are the closest relatives of the millipedes. There is no argument for this grouping that can be based on morphology (apart from a special feature of the embryonic formation of the nervous system). This possible grouping is called "Myriochelata" or "Paradoxopoda".

The internal system of the Myriapoda is relatively well secured.

The bipedes and the puntipods form the taxon Dignatha due to several well-founded characteristics. These features are a fusion of the basal members of the first maxilla to form a lower lip (gnathocilarium), the loss of the second maxilla or rudimentary attachment of the same in embryonic development, genital openings in the second segment, tracheal openings near the legs, young animal with only three pairs of legs.

The Dignatha in turn form the taxon Progoneata with the pygmy pods due to the formation of the intestines and fatty bodies within the yolk and the structure of the mechanoreceptors ( trichobothria ).

Occasionally there is a mass reproduction of millipedes, probably due to mild weather conditions and cheap food. By the mass occurrence of diplopods Megaphyllum unilineatum the inhabitants in the Bavarian felt Obereichstätt harassed. Together with the water association, the community erected a 200 m long and 30 cm high protective wall on the outskirts.

The municipality of Röns in Vorarlberg, Austria, has also been plagued by Megaphyllum unilineatum every spring for several years since 2000 . There the millipedes were fought with predatory mites and diatomaceous earth .

Millipedes, especially the larger tropical species, are also often kept as terrarium animals. Like all other animals, they require regular care and species-appropriate housing, but they have the advantage of being very inexpensive to maintain. Most species do not need live food or special lighting, and usually no heating either. The soil substrate with half-rotted leaves, white- rotten wood and the occasional offer of fruit is usually sufficient for them .