The double pods (Diplopoda) are a class of the arthropods (Arthropoda) and are classified with the millipedes (Myriapoda). Around 10,000 species of these animals are known worldwide, making them the largest group of millipedes. However, it is assumed that many times the known species exist.

Millipedes have existed for around 410 million years ( Silurian ), and they were among the first land inhabitants and thus represent a very primitive group of animals. Species of the genus Arthropleura lived 310 million years ago and reached a length of 2 meters and was 50 cm wide . It was the largest land arthropod known to date to ever live on this earth and was a predator capable of killing prey the size of a deer.

Way of life of the double-pod

Almost all diplopods live in the ground or in decayed wood and feed on vegetable waste, the vast majority live in the tropics. Very few species are known to be predators.

An often encountered representative is the potted thousand feet ( Blaniulus guttulatus ). This lays its eggs in small cavities in the ground in spring and summer. At the time of hatching, the larvae have only a few body segments. After each stage of development that concludes with a molt, it has more segments. The centipede is fully grown and fully developed after about a year. It is nocturnal, during the day it hides in damp, dark hiding spots such as leaves and mulch . It feeds mainly on decaying organic substances, so it is a welcome guest in every compost heap. Even if it sometimes makes itself unpopular through feeding holes on various plants, it is an important beneficial insect .

Construction of the bipedal

Like all members of the Myriapods, the bipedal pods are characterized by a uniform structure of the body segments. The most striking and eponymous feature of the group is a merging of the segments (starting from the 4th trunk segment) to double segments, whereby each of these diplo segments has two pairs of legs. Above all, this group is referred to as "millipedes" because it has the most pairs of legs of all groups of Myriapods. The maximum number of pairs of legs is "only" 350 pairs. The most original forms of the double-footed pods (the penicillata) have a maximum of 17 pairs of legs and are very small, soft-skinned forms. In the derived forms, lime is stored in the chitinous skin to stiffen it.

The strongly arched head of the bipedal feet has very small antennae that are bent down and scan the ground with special sensory organs. The animals have eye fields on each side of the head, which consist of individual eyes (ocelles), as well as a temple organ ( Tömösváry organ ) also on both sides of the head, with the penicillata there are also sensory hairs ( trichobothria ) on the head. The strong mandible is in three parts, the mouth is closed at the back by a lower lip ( gnathochilarium ) formed by the 1st maxilla . The 2nd maxilla remains rudimentary and forms only the posterior margin of the lower lip.

The genital opening is located behind the 2nd leg of all bipeds, the males have two intricately built penes . The tracheal openings are located just above the base of the legs, starting on the 3rd pair of legs. Many podipods in the Chilognatha group have defensive glands, which in the case of the Glomerida contain the quinazonilones glomerin and homoglomerin . Julidae form benzoquinones in their defensive glands , while the Polydesmida form free hydrocyanic acid and benzaldehyde . Many species can squirt these secretions over several centimeters.

Within the double-pod there are original types with indirect as well as more developed types with direct sperm transmission.

The males of the Penicillata spin a thread construct on which they place a sperm drop. With the help of signal threads, the females find the web and ingest the sperm. This form of fertilization largely corresponds to that of the puntipods .

With all other bipedes there is direct mating of the females by the males. Sperm transfer takes place through specially trained copulatory organs that have been developed from extremities in different ways within the groups. The representatives of the Pentazonia have specially modified terminal legs with which they can hold and mate the female. The males of the Helminthomorpha have several front legs (in the area of ​​the 7th to 11th pair of legs) that have been transformed.

Also parthenogenesis has been proven in many species of millipede. The female lays the eggs in crevices or places them in burrows. The Nematophora surround them with a web and within the Colobgnatha one can also find brood care . The females and (less often) also the males roll around the eggs. A larva with three pairs of legs hatches from these eggs, and more pairs of legs are added in the course of the many moults.

The millipede, together with the Wenigfüßern the Dignatha due to the fusion of the basal elements of the 1st maxilla to a lower lip (Gnathochilarium), the loss of 2. maxilla or the rudimentary system thereof in the embryonic development of genital openings in the second segment, the Tracheenöffnungen close the legs as well as a young animal with only three pairs of legs.

With the pygmy pods , the Dignatha form the taxon Progoneata due to the intestinal and fatty body formation within the yolk and the structure of the mechanoreceptors (trichobothria). This group is usually compared to the centipedes as a sister group.

Internally, as already mentioned in the text, the double pods are divided into the original penicillata and the derived chilognatha. Within the Chilognatha there is a further division into different taxa . The representatives of the bipedes occurring in Central Europe are classified as follows (species incomplete): 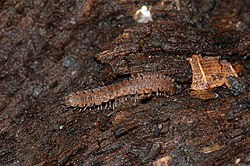