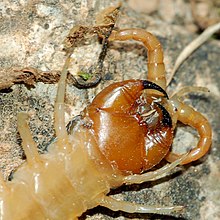 The centipedes (Chilopoda) are a class of the arthropods (Arthropoda) and are classified with the millipedes (Myriapoda). Around 3,000 species of these animals are known around the world, making them the second largest group of millipedes after the bilipedes . The animals reach body lengths of 1 to 10 centimeters, tropical centipede species of the order Scolopendromorpha (Scolopendra, dt .: Skolopender) can also be over 30 centimeters long.

The centipedes represent a combination of four individual groups, which vary greatly in their morphology, which is why a uniform description is difficult. Like all members of the Myriapods, the centipedes are characterized above all by a uniform structure of the body segments. The large poisonous claw, which was developed from the first pair of legs and is accordingly referred to as the maxilliped , can be found in all centipedes.

In all groups with the exception of the Scutigeromorpha, the head is flat. The front edge always forms a connecting line between the two antennas , the frontal shield (clupeus) is folded down. In this way, the mouth with the mouth parts reaches the underside of the head, directly in front of the poisonous claws. The mandibles of the Scutigeromorpha are very strong and able to bite chitin parts . The 1st maxilla helps with food intake and holds the particles in place. The 2nd maxilla consists only of a button with a retaining claw and a clasp-like structure. The large venomous claws have a strong point at which the large venomous gland ends. In the Scutigeromorpha they can be moved in all directions, in all other groups they are stiffened by a hip plate and can only be used in one plane. The antennas of the Scutigeromorpha represent flagellated antennas with two basic links ( convergence to the antenna of the insects ), with all others they are designed as pearl-string-like link antennas. Compound eyes occur only in the Scutigeromorphs. The other groups have point-shaped side eyes ( ocelles ), which have a lens (formed from the cornea), but which lack the underlying crystal cone of the Scutigeromorpha (and other arthropod groups). Many geophhilomorphs are eyeless, and blind species are also found in the other groups. In addition, post-antennal sensory organs ( Tömösváry organs) are found near the antenna base in the Lithobiomorpha and Scutigeromorpha, which are probably receptors for carbon dioxide concentrations.

Centipedes from Thailand near Phang Nga

The back plates ( tergites ) vary in length, especially in the Lithobiomorpha (heterotergy), in the Scutigeomorpha a particularly large plate covers segments 7 to 9. In the Geophilomorphs, each segment has two back plates. In total, the Lithobiomorpha and the Craterostigmomorpha have only 15 pairs of legs, the Scolopendromorpha 21 to 23 pairs of legs and the Geophilomorpha up to 191 pairs of legs. A common characteristic of all centipedes is an odd number of pairs of legs. This is due to the fact that during the embryonic development of the animals, two pairs of legs (= four individual legs) always emerge from one body segment. The first pair of legs is transformed into a poison claw in the further course, so only one pair of legs emerges from the first segment. All other running leg segments each contribute two pairs of legs (the terminal pair, however, is more or less reshaped in some species). The total always results in an odd total number of pairs of legs.

The tracheal openings in the Scutigeromorpha are always dorsally behind the tergites, while in all other groups they are above the legs.

Almost all groups have defensive glands for defense. In the Scolopendromorpha, these secrete a secretion containing bluish acid; in the Lithobiomorpha and Geophilomorpha, glue-like substances that stick together the mouthparts of attacking arthropods.

Distribution and way of life

Centipedes occur worldwide beyond the arctic circle and colonize a variety of different habitats from the rainforest to the desert. They need a humid environment and are bound to moisture in their habitat. During the day they are generally hidden in leaves, under stones or in the ground. Compost heaps and rotten wood also serve as shelter. The animals are shy of light and after being scared off, they quickly seek darkness during the day.

At night they go on long, extensive forays as active hunters who pursue their prey and overwhelm it with lightning speed. They push forward, like a snake . They bite into their prey and wrap their legs around them to hold them tight. The strong poison then leads to the death of the prey. They can reach a very high speed and are very nimble and agile.

Scolopenders usually have an extremely high potential for aggression, which is otherwise rarely found in other animals. Unlike other wild animals, they do not retreat when harassed and disturbed, but actively defend themselves with a poison bite. It is therefore urgently advisable not to touch a scolopender with your hand, including on the abdomen, as they can turn and bite very quickly.

In the Scutigeromorpha, the eggs are laid individually and masked with earth. The females of Scolopendra and Craterostigmus lay down an egg ball and roll around it ventrally, the Geophilomorpha roll around the egg ball dorsally. In all of these brood-nurturing species, the eggs are regularly licked and fungus removed.

Acetylcholine , serotonin and histamine can be components of scolopic toxins . A few species also produce hydrogen cyanide . The toxic effect is normally not life-threatening for a robust, healthy and adult person, but it is very uncomfortable and painful. The bite site usually swells very much, resulting in very intense pain that radiates over the entire body. In addition, depending on the type and dosage of the poison, there are symptoms of paralysis that can last for several days. The poison also often causes nausea and dizziness as well as numbness at the bite site. In rare cases it can also lead to breathing problems and irregular heartbeat. In particular, people who are already sick and weakened, as well as children and the elderly, are recommended to seek medical treatment. A necrosis can occur below the bite site and needs urgent medical attention. As with all bite wounds, there is a risk of blood poisoning .

Two deaths have been documented so far, one of which was a girl who was bitten directly on the head by a scolopender. In the other case, a 39-year-old Thai man ate the centipede after being bitten. He died within two hours.

Systematics of the centipedes

The position of the centipedes within the trachea is still controversial. As a recognized hypothesis, the position presented here within the myriapods and there as a sister group of the Progoneata formed from the puntipods , pygmy pods and double -pods is discussed. An alternative hypothesis discusses the centipedes as a sister group of all other tracheal animals and thus as the most original form of this taxon , with the consequence that the millipedes are resolved as an unnatural group (see millipedes ).

Internally, the centipedes are divided into several morphologically different groups. The following list assigns the Central European species to this system.