Except for the sponges and the radial symmetry " coelenterates " (coelenterates, Radiata ) all multicellular animals belong (95 percent) to the Bilateria (Bilateralia, "animals with two sides"), due to their bilateral body symmetry (except echinoderms : Pentamerie ) are called. A body is bilaterally symmetrical if it can be divided into two externally identical, mirror-image halves along the median plane (mirror plane, plane of symmetry). In contrast to radially symmetrical tissue animals, through which many planes of symmetry can be laid (polysymmetry), the bilateria have a clear plane of symmetry in the longitudinal direction of the body (monosymmetry), on the basis of which different planes and directions can be defined.

Sometimes it is necessary to resort to the basic anatomical position. In humans this is defined as follows: standing upright, eyes straight ahead, hands supinated (palms facing forward); the feet are parallel (see also the neutral-zero method ). 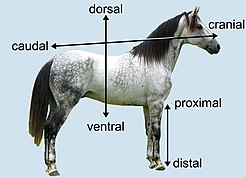 Main anatomical directions using the example of the horse 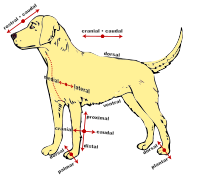 further anatomical directions using the example of the dog

With regard to the median plane (mirror plane of body symmetry) one differentiates:

Other general location and directional descriptions

* These designations can be combined in order to provide more precise information or to be able to specify intermediate positions by replacing the original ending “-al” in the first word component with an additional “o”, e.g. B. crani o dorsal : head to back; ventr o lateral : half laterally, half on the abdomen; poster o lateral : laterally behind. Axis orientations, relative distances and directions can be indicated by compound words from opposing adjectives, e.g. B. apik o basal : from the base to the tip; later o medial : oriented transversely to the median plane.

Position and direction designations on the fuselage

In addition to the usual names for the main directions , the terms are often used in human anatomy in the area of ​​the trunk

In animal anatomy, the above terms are only allowed on the head.

In relation to the spine:

In relation to the sternum :

Position and direction designations on the head

Reference directions of the anatomical attributes rostral and caudal ( occipital ) in a human skull, occiput (Os occipitale) highlighted in green. Note that the "rostro-occipital axis" in the human skull is bent by approx. 90 °, while in almost all other vertebrates it is stretched.

The term cranial does not make sense on the head. The terms are therefore used for structures located on the front of the skull or oriented towards the front or the front end of the skull:

The term is also used for structures lying behind:

Instead of lateral and medial , the terms are also used on the head, especially on the eye :

Indications of position and direction on the limbs

While the same terms apply to the wrist or tarsus as to the trunk, the following is used on the hand or on the foot :

Due to the possible rotation of the forearm and lower leg , the terms medial and lateral are not clearly defined. That is why it is usually used for the forearm

and in the same way with the lower leg

In the body cavities the terms are also used:

Adjectives for other parts of the body

Adjectives can be formed for practically all parts of the body and organs to denote affiliation. For this purpose, the Latin word stem is usually provided with the final syllable -al , for example

With prefixes like sub (under) and supra (over) positions relative to the body part or organ can be given, for example

** These designations can be combined by replacing the original ending “-al” in the first word component with an additional “o”, e.g. B. an o genital : affecting both the anus and the genital organs.

Position and direction designations on the teeth

In the case of teeth , the usual terms such as medial ("to the middle") cannot be used because of the curvature of the dental arch . Instead, other terms such as mesial are used. The term distal has a specific meaning for the bit .

The individual teeth themselves are identified with the tooth scheme , although today the EDP-compatible FDI scheme is used almost exclusively . 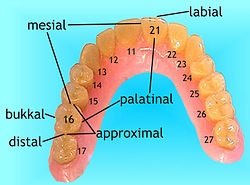 Surfaces of the tooth crown

Along the dental arch

*** These designations can be combined in order to provide more precise information or to be able to specify intermediate positions by replacing the original ending “-al” in the first word component with an additional “o”, e.g. B. mesiobuccal: half in front, half on the cheek.
§ Attention! In neurology, refers vestibular to the organ of balance ! In zoology, instead of vestibular, the terms labial and buccal are mostly used synonymously, regardless of whether the animal has the cheeks that are predominantly typical for mammals or whether the lips extend to the end of the rows of teeth.

Other location and direction designations

There are three main sets of body planes: transverse planes , frontal planes , and sagittal planes . The middle sagittal plane is the median plane . The directions are differentiated accordingly:

In head imaging , sections along these body planes are named as follows: