Drawing of the bony labyrinth in the human inner ear

Scheme of the membranous labyrinth in the human inner ear 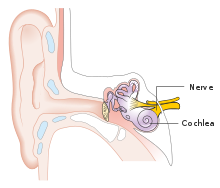 Position relationships of the outer ear , middle ear and inner ear in humans

In the organ of equilibrium of living beings, various sensors are used to perceive linear accelerations (including gravitational acceleration ) and angular accelerations . The stimulus is usually absorbed by sensory cells that are coupled to one or - as in humans - several specially suspended or resting solid bodies, so-called statoliths . A liquid in a pipe system is often used as an inertial mass for the rotary movements. In all vertebrates, including humans , the vestibular apparatus is the most important organ of equilibrium.

The vestibular apparatus of the vertebrates

The paired vestibular organ ( organon vestibular , vestibular apparatus) of vertebrates and humans is located in the inner ear . It is usually divided into five components each: three semicircular canals and the two structures called macular organs sacculus ( Latin : 'sac') and utriculus (Latin: 'small tube'). Fish and amphibians (see below ) have an additional sixth component, a lagena (Latin: 'bottle'), which is also a macular organ. There are also exceptions to the number of semicircular canals, but only in very primitive vertebrates. Lampreys have only two pairs of semicircular canals, and hagfish only have one pair.

Sacculus and utriculus record the translational acceleration of the body in space. They are also perpendicular to each other so that the saccule responds to vertical and the utriculus to horizontal accelerations. The sensory cells protrude with their appendages (sensory hairs, especially stereocilia ) into a gelatinous membrane that contains otoliths (statoliths). Otoliths are fine calcium carbonate crystals , which increase the density of the membrane and thus in turn enable an inertia effect, so that the detection of linear accelerations is made possible at all.

Processing in the nervous system

The sensory information arrives from the sensory cells via the 8th cranial nerve ( vestibulocochlear nerve ) to corresponding nerve nuclei in the brain stem ( vestibular nuclei ). These receive additional information from the eyes, the cerebellum, and the spinal cord .

The interconnection of the organ of equilibrium with the eye muscles ( vestibular ocular reflex ) enables the visual perception of a stable image while the head is moving at the same time.

In addition to the equilibrium system ( vestibular system ), the visual system and the proprioceptive system ( depth sensitivity ) are also responsible for conscious orientation in space .

If the function of one of these systems is disturbed, this can result in contradicting information from the individual sensory organs. This can make you feel dizzy . Malfunction of the otoliths can cause benign positional vertigo.

Recent studies show that the organ of equilibrium in the inner ear is not only responsible for spatial orientation: it also plays an important role in the precise control of body movements. This function seems to play an important role, especially for movements in the dark or for complex sequences of movements, such as those performed by gymnasts or artists .

The vestibular apparatus of fish and amphibians

In addition to the semicircular canals, all fish have three macular organs, each of which contains an otolith . The saccule in particular serves the sense of hearing , the differences in density between the sagitta and the surrounding endolymph in the case of sound waves in the near field leading to shear movements in the hair cells. To expand the sense of hearing to greater distances and higher frequencies, some bony fish species have special coupling mechanisms between their swim bladder and the skull bone or their inner ear. In a few cases, the inner ear is surrounded by special air-filled bubbles.

Amphibians also have a Lagena, which, however, only perceives acceleration. As far as is known so far, the sacculus of these animals is only used to perceive substrate vibrations, while the amphibiorum papilla can also pick up sound and the basilar papilla is used exclusively for hearing.

Other organs of balance

Comparative representation of the equilibrium organ of a reptile (top), bird (left) and ox (right)

The organs of equilibrium in birds

Birds even have several independent organs of balance. They have a second organ of equilibrium in the lateral flaps of the spinal cord . It is solely responsible for controlling walking and standing. The vestibular apparatus in the inner ear, on the other hand, controls the movements of birds in flight .

The organs of equilibrium in insects

A large number of organs of insects have been described that presumably or have been proven to serve as an organ of equilibrium:

In the animal kingdom, organs of equilibrium with a kinetically freely moving solid, a statolith , which consists of the body's own material and which has arisen through biomineralization within the body or has been taken in from outside, are widespread . Such organs are usually called statocysts and can be found, for example, in:

Since the statoliths of crayfish are located in pits at the base of the first pair of antennae, they are lost when they molt and must be replaced by the animals with a pebble from their surroundings. This fact formed the basis for experiments in which only iron granules were made available to the crabs after molting. The static sense could be disrupted and specifically examined with the help of artificial magnetic fields.