This article is about locomotion, for the sport see Walking (Sport) ; for the story by Thomas Bernhard see go (narration) , for the novel by Jenny Erpenbeck see go, went, gone . 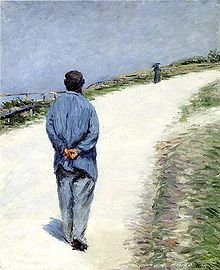 Walking is a form of locomotion in which, unlike running, there is no flight phase. The body is in contact with the floor via legs and feet in every phase of the movement cycle. With two-legged walking, instead of the flight phase, there is a double support phase , which in humans takes up around 20 percent of the total cycle time. According to a study in Oregon , USA, the average speed of a pedestrian when crossing a road with traffic lights was about 5 km / h. This value fluctuated between about 4.5 and 5.5 km / h depending on age, gender and factors such as walking alone or as a group. A leisurely stroll has an average speed of around 3 km / h.

A distinction is made between the following gaits according to the sequence of movements :

In this computer simulation, the head remains level while walking while the hip follows a sinus movement.

A step cycle or gait cycle is the basic unit of the act of walking. When walking on the heel, it corresponds to the period between two heel strikes of the same foot and is divided into two phases: stance phase and swing phase . The stance phase begins when the heel touches the ground and ends when the toes are detached from the floor, ideally rolling the foot carefully over the big toe . The following swing phase ends when the heel of the same foot touches down again. At normal walking speed, the stance phase takes up around 60 percent and the swing phase takes up around 40 percent of the step cycle time. Since the stance phases of the right and left leg overlap when walking, there is a bipedal support phase at the beginning and end of each step in which both feet touch the ground at the same time. The time span of the bipedal support phase depends on the speed of movement and disappears when you run faster if only one foot ever touches the ground. When sprinting even faster , the feet no longer have any contact with the ground during a short phase, the so-called floating phase.

The foot enables the movement through its joint mechanics, in that it deforms when stepping on and absorbs elastic energy , while when pushing it acts like a rigid lever that transfers the force exerted on it to the ground.

The actual change in position during the act of walking basically happens by "preventing falling" on the side that is temporarily free of ground contact. With regard to foot-floor contact, in addition to the heel gait, two other human ways of walking can be distinguished: In the ball gait , the person puts the ball of the foot (forefoot) on first, possibly, but not necessarily, lowers to the heel and ideally also pushes himself over the big toe off. A mixed form is the metatarsal attachment in which, ideally, the entire foot touches down flat over the outer edge. Walking like the great apes , d. H. clasping branches or on the edges of the feet, does not correspond to a normal human gait. The measurement and observation of the forces and processes that occur when walking is the subject of gait analysis .

Walking is one of the automatisms. It is a behavior that is automatically triggered by the central nervous system (without external stimuli). Further examples of such automatisms are the movement of the fins in fish or the flapping of wings in birds.

The upright gait in humans

How the obligatory upright gait came about in humans has not yet been finally clarified. The only thing that is certain is that man's ancestors walked upright 5 million years ago. Furthermore, the earliest evidence of hominini walking upright comes from layers of soil that were similar to today's gallery forests in their time of origin, i.e. from a habitat in which wooded areas, moist grasslands and lake shores alternate. From this it is deduced that walking upright has already developed as an adaptation to certain modes of locomotion on the trees.

The change from quadruple locomotion to upright gait was accompanied by numerous changes in the human skeleton. Unlike the 4.4 million year old fossil “ Ardi ”, an Ardipithecus ramidus , the human foot is not a grasping tool; “Ardi”, on the other hand, was able to spread the big toe and use it to grasp. However, small children still have a gripping reflex in the palms of the hands as well as on the soles of the feet, which however disappears over time. The human pelvis is widened and serves as a “bowl” for the intestines when walking upright. The spine is doubly S-shaped (sigmoid) and bears the back and head, the occipital hole is located under the skull and not (as in quadrupeds) relatively far behind the skull.

However, walking upright also puts strain on the lower part of the body. So in old age people tend to:

In texts of cultural philosophy related to the emancipation of man, the "upright walk" has become a metaphor for the uniqueness of man, to look around himself confidently and to form his judgment.

At the beginning of learning to walk, children put their feet with the whole sole or forefoot and do not roll off at all or hardly at all. Unrolling develops about six months after starting free walking. The extent to which a child rolls their foot is therefore taken as a measure of gait maturity. With increasing gait maturation, the pressure curve shows two peaks: one when the heel touches down, one when the toe is pushed off the ground.

Go in everyday life can take place in the ball passage, the placement of the foot with the ball of the spring-loaded stopping the heel is, just as you would exercise daily at Trepp descent, or occasionally while sneaking. For this purpose, the shoe, including any insoles, should only have a slight drop , 2-3 mm, or be completely without drop. If you do not have to climb a lot of stairs every day, you can try to walk part of the everyday routes on flat, flexible soles in the ball gang against the stunting of the muscles that only play a role in the ball gang. There are also preliminary exercises for those inexperienced in walking. Wherever groping is an advantage, especially in warm countries, whose deserts are by no means predominantly soft sand, but rather stony ground, and many people traditionally go barefoot, walking in a ball gait is naturally a common gait in everyday life.

Gibbons always move on two legs on the ground, where they naturally hardly ever get to. Chimpanzees and gorillas mostly stay on the ground, but use their ability to walk upright but little and only for short distances. Until the discovery of the fossil " Ardi ", the so-called ankle gait , which is mainly used, was considered a characteristic that was also attributed to the early hominini . However, the analysis of his hand bones revealed no evidence of ankle gait, from which it was concluded that the ankle gait is a relatively late customization of the two great apes.