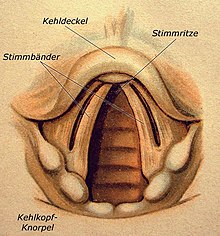 Drawing of the larynx

The larynx  - in medical jargon also larynx [ ˈlaːrʏŋks ] (from ancient Greek λάρυγξ lárynx , German 'throat' ) - forms part of the respiratory tract, the transition from the throat to the trachea in the front of the neck. From the outside you can see the Adam's apple in the middle of the neck , which corresponds to the central protrusion of the thyroid cartilage . Embryonic it arises from the fourth to sixth gill arch . The diseases of the larynx are the subject of laryngology , a branch of ear, nose and throat medicine , the corresponding specialist is called a laryngologist .

The larynx has two functions. On the one hand, it protects the windpipe from pieces of food by pulling the larynx forward and upwards when swallowing and thus closing it with the epiglottis . On the other hand, the vocal folds in mammals regulate the flow of breathable air and generate sounds or the human voice through their vibrations . Birds also have a larynx, but without vocal folds and epiglottis. In birds, the syrinx , also known as the "lower larynx", is responsible for voice training. 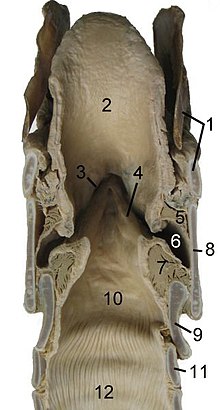 The cartilage is held together by various ligaments, and the larynx is suspended at the top by a membrane ( membrane thyrohyoidea ) on the hyoid bone ( os hyoideum ). The vocal cords or vocal cords ( ligamenta vocalia ) are stretched between the control cartilage and the posterior wall of the thyroid cartilage. They are moved by special muscles (→ larynx muscles ). The inside of the larynx is lined with a respiratory mucous membrane that does not cover the vocal folds.

By regulating the width and tension of the vocal folds, through the vocal muscle fibers running through them lengthways, and above all through the larynx muscles, the basic sound of the voice or song is formed. This primary larynx sound (primary sound) is formed into speech sounds by movements of the tongue and mouth. The voice gets its full sound from the resonances in the pharynx, mouth and nose (→ vocal tract ).

Above the larynx is the throat, into which the air from the mouth and nose as well as the food pass. The larynx continues down into the windpipe . The beginning of the esophagus is behind, in animals above the larynx. Both lie in a space of loose connective tissue , which is bounded in front by the middle and behind by the back sheet of the neck fascia . The middle leaf stretches between the two omohyoidei muscles (shoulder blade-hyoid bone muscles ), the rear one surrounds the cervical spine with its muscles. The thyroid gland lies below the larynx . To the side of the larynx and esophagus lies the vascular nerve road of the neck in the same space.

The larynx plays an essential role in human voice formation (phonation) and in the formation of sounds in other mammals. The muscle cricoarytenoideus posterior (also called "posticus", in animals the muscle cricoarytenoideus dorsalis ) arises at the back of the cricoid cartilage and attaches to the processus muscularis (muscle protrusion) of the control cartilage of the respective side, pulling it inwards and thus the vocal folds that are in front of the joint connected to the anterior cartilage.

This Stimmritzenöffner are three closers of the glottis ( glottis opposite). The lateral cricoarytenoideus muscle originates from the cricoid cartilage at the front, also attaches to the muscular process and thus makes exactly the opposite movement as the posticus. The transverse and oblique cartilage muscles ( Mm. Arytenoidei obliquus and transversus ) directly connect the two cartilages and pull them together. The vocal cord muscle ( Musculus vocalis ), which is part of the Musculus thyroarytaenoideus, lies on the outside of the vocal folds and regulates their tension, is important for the formation of the voice .

The frequency at which the vocal cords vibrate determines the pitch, while the strength of the air flow determines the volume. In addition to the resonances in the pharynx, mouth and nose, resonance also causes vibrations in the chest and the paranasal sinuses . With chest resonance, the voice is more sedate and slightly darker than with head resonance. Constant hoarseness without a recognizable organic cause is often due to the fact that the resonance spaces are rarely used and therefore the voice is overburdened.

When swallowing, the larynx is pulled up both on the hyoid bone and against the hyoid bone, thus pressing the epiglottis against the fat pad on the neck wall. Due to the contraction of the base of the tongue, which forms the front wall of the neck, the epiglottis completely closes the entrance to the larynx. If you try to talk at the same time as you eat, small amounts of food or liquid can touch the lining of the larynx and windpipe, which leads to a strong urge to cough .

The inferior laryngeal nerve (lower laryngeal nerve, referred to in animals as the caudal laryngeal nerve ) supplies the internal larynx muscles in a motor-driven manner and the mucous membrane of the larynx below the glottis. It also comes from the Xth cranial nerve.

The superior laryngeal artery , which supplies the larynx above the glottis, is a branch of the superior thyroid artery . It reaches its destination through a perforation in the membrane ( membrana thyrohyoidea ) on which the larynx is suspended from the hyoid bone. The inferior laryngeal artery (lower larynx artery) originates from the thyrocervical trunk ( inferior thyroid artery ) of the subclavian artery. Ascending, it supplies the trachea and the lower part of the larynx.

The course of the veins is based on that of the arteries, as in most regions of the body.

Malformations (shape anomalies) of the larynx are relatively rare. In laryngeal atresia, there is a total occlusion, which usually leads to death before birth. A partial Larynxatresie can autosomal dominant inherited. A gap in the larynx results in an incomplete closure of the larynx and thus an incomplete separation of the trachea and esophagus.

A bulging of the laryngeal ventricle is called a laryngocele .

If the superior laryngeal nerve is injured, it may a. movement of the cricothyroid muscle may be restricted. Since this is responsible for the coarse tension of the vocal cords and the associated regulation of the vocal pitch, so-called "robot phenomena" can occur in the event of restrictions. In doing so, the patient loses the ability to regulate the pitch of his voice while speaking in order to change the pitch. In addition, the voice sounds hoarse and powerless.

In 1858 Ludwig Türck and Johann Nepomuk Czermak introduced laryngoscopy as a mirror view with light reflected from the outside, i.e. using a larynx mirror and a forehead mirror, which laid the foundation for the development of larynx surgery that began in the 1860s was. In order to examine the larynx, endoscopes in particular are used nowadays in addition to the examination using a larynx mirror under illumination with a cold light source or LED lighting worn on the forehead . The laryngeal endoscope , a rigid endoscope, is inserted into the mouth and allows a 90 ° or occasionally 70 ° lens to look down into the larynx. On the other hand, a flexible endoscope that is inserted through the nose and nasopharynx can enable examination of the larynx in this way.

From the outside, the larynx can be examined by feeling or a computed tomogram or magnetic resonance examination can be used for imaging .