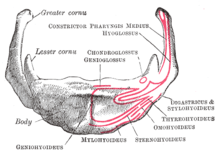 Os hyoideum - view from above

Location in the body

Play media file
Video: Why We Can Talk

The hyoid bone ( Latin Os hyoideum or Os hyoides ) is a small, curved bone on the floor of the mouth below the tongue . It is not connected to the rest of the skeleton , just suspended by muscles and ligaments . For this reason, most of the visual models of the human skeleton are missing. The hyoid bone has a U-shaped shape (Greek huoeides , Latin hyoideus ) and is around 2 to 3 cm tall in humans. The hyoid bone arises in the embryo from the cartilages of the 2nd and 3rd branchial arches .

In humans, the hyoid bone consists of a middle piece (body) and two pairs of lateral extensions (horns). The posterior pair of lateral processes ( cornu majus ) is larger and connected to the larynx , the anterior cornu minus smaller and suspended from the style of the temporal bone (processus styloideus). In primates and humans, the upper part of the ligament between the front horn and the temporal bone is ossified and thus forms the above. Stylus process.

The non-primate the hyoid bone is divided into six sections: Tympano- , stylo , epithelial , Cerato- , basic access and Thyreohyoid . The unpaired basihyoid corresponds to the body, the large horns represent the two thyroid glands, the two small horns are represented by the two ceratohyoid glands. These five sections represent the hyoid bone in the narrower sense. In addition, the paired epi-, stylo- and tympanohyoidea, which form the hyoid branch on each side, are added as a hanging device. The Tympanohyoidea consist of cartilage or ossified cartilage and a tape adhesive attached to the skull.

Both pairs of horns are larger in the lower vertebrates and possibly represent the remains of the hyoid bone and first gill arch, which is still fully developed in the fish , while the so-called body, which sometimes consists of several parts one behind the other, represents the unpaired middle section of the hyoid arch.

The hyoid bone can be felt through the skin. It can be represented by imaging examination methods.

The hyoid bone is fixed by ligaments and muscles in the base of the skull. This gives it, figuratively speaking, a rocking function. The larynx and windpipe are suspended from the underside of the swing with movement optimization. This has a beneficial effect on the functions of opening the jaw, speaking, swallowing, breathing and coughing.

A fracture of the hyoid bone is an indication of violence against the neck ( strangling ), so the bone is examined during an autopsy if suspected .

The hyoid bone is the starting point of many muscles, which are divided into two groups according to their location in relation to the bone:

Suprahyal muscles: They pull the hyoid bone up and participate in the act of swallowing .

Infrahyric muscles: They pull the hyoid bone down. All muscles in the group are innervated by the ansa cervicalis.