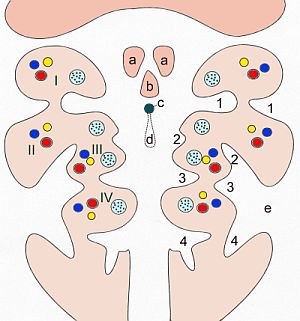 The gill arches , also called branchial arches ( Arcus branchiales ), throat arches , pharyngeal arches or visceral arches (southern German is usually used as plural 'arches'), are formations of the gill gut in vertebrates . The process of formation is known as branchiomerism . In the mammalian embryo , six such arcs are formed, with the fifth and sixth usually only being rudimentary .

In fish , the membranes between the furrow and pocket tear and the definitive gills appear . The existence of such gill arches and furrows in embryos of higher vertebrates was first described by Martin Rathke .

Each gill arch has a gill arch artery and - vein , a gill arch nerve and a muscle - and a cartilage model . In higher vertebrates, many organs develop from the gill arches , which are therefore referred to as branchiogenic organs .

From the first branchial arch ( mandibular arch large parts are formed of the face, such as) the upper jaw ( maxilla ), lower jaw ( mandible ) and the palate , as well as in mammals, the auditory ossicles hammer and anvil (but not the stirrup). In fish, amphibians, reptiles and birds, the bones of the primary temporomandibular joint develop instead of the ossicles: Os articulare and Os quadratum . The cartilage system is called Meckel's cartilage .

The mimic muscles , as well as the stapedius muscle , the stylohyoid muscle and the posterior part of the digastricus muscle, arise from the muscular system . The second branchial arch nerve is the seventh cranial nerve, the facial nerve . The associated artery initially develops into the arteria stapedia . This in turn recedes completely, so that only a vascular hole remains in the stapes.

The artery of the third branchial arch develops together with the dorsal aorta to form the internal carotid artery .

The arteries of the fourth branchial arch develop differently on both sides: the aortic arch arises from the left artery, and the right subclavian artery.

The fifth gill arch is only rudimentary or not at all. There are no definite structures.

The arteries of the sixth gill arch develop on both sides different: Links created the pulmonary trunk and the ductus arteriosus , right pulmonary artery .

Between the six gill arches, five pharyngeal pouches or gill slits ( Sacci pharyngeales ) develop on the inside , from whose endoderm definitive structures also develop.

Drawing of the gill arch region of a human embryo at the end of the fourth week.

Representation of the gill arch region in a transverse section .

Due to the strong growth of the second branchial arch, the second, third and fourth furrows are usually closed to form the cervical sinus . This obliterates. If this closure is incomplete, neck fistulas and cysts can form.