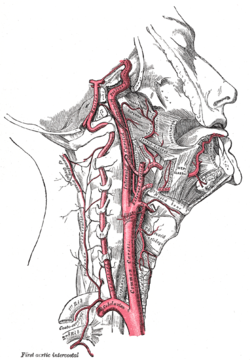 It arises from the splitting of the common carotid artery , the other branch is the usually somewhat weaker external carotid artery , which supplies the outer parts of the head and partly the cervical organs as well as the meninges in the skull . There are many connections ( anastomoses ) between the two . In the embryo, the internal carotid artery is connected to the longitudinal neural artery (the later basilar artery ) via the trigeminal artery .

At the exit of the internal carotid artery, the carotid sinus , there are pressure receptors (also called presso- or baroreceptors ) that monitor the blood pressure in the arterial system and transmit the information to the cardiovascular center in the brain and represent the receptor area for the carotid sinus reflex . In addition, the internal carotid artery can be found at the origin chemoreceptors in the so-called carotid body that the content of carbon dioxide , oxygen and pH in blood monitor.

The internal carotid artery is of a sympathetic accompanied plexus, the from the upper border strand derived.

The pars petrosa ("petrous bone") runs within the part of the temporal bone of the same name and is about 3 cm long in humans. It first moves cranially, i.e. upwards, but then describes an arc in the front wall of the tympanic cavity ( paries caroticus ) to the front and to the middle (anteromedial) towards the sphenoid body . The arch is also known as the "carotid knee". The pars petrosa releases several branches to the tympanic cavity ( Arteriae caroticotympanicae ) and in 30% of the cases one branch to the canalis pterygoideus ( Arteria canalis pterygoidei ). In the area of ​​the inner opening of the carotid canal, the internal carotid artery is usually only covered by hard meninges ( dura mater ) and rests on the foramen lacerum . The space between the wall of the Karotiskanals and the internal carotid artery is of a as venous plexus internal carotid designated venous plexus ingested. This venous plexus connects the cavernous sinus located inside the skull with the pterygoid plexus located outside the skull . This connection can play a decisive role in the development of meningitis ( meningitis ).

Immediately on the inside of the base of the skull, the internal carotid artery runs through the cavernous sinus . This section is known as the pars cavernosa ("sponge work part"). The artery here makes another "S" -shaped arch from the back and bottom to the front and top, which is called a siphon or "carotid siphon ". In this section, the internal carotid artery gives off a branch to the neurohypophysis ( arteria hypophysialis inferior ), branches to the trigeminal ganglion ( Rami ganglionares trigeminales ), to the surrounding hard meninges ( Ramus meningeus ) and to the cavernous sinus ( Ramus sinus cavernosi ).

After breaking through the hard meninges medial to the anterior clinoid process , the internal carotid artery merges into its cerebral pars (“brain part”). The pars cerebralis lies in the subarachnoid space at the base of the brain . It runs in this section from the back bottom to the top front. Immediately after passing through the hard meninges, it gives off the ophthalmic artery as a branch . This runs with the optic nerve ( nervus opticus ) to the eye. Most comes from the pars cerebral and the posterior communicating artery out that part of the circle of Willis , and the front combines with the rear basin. Other branches are the anterior choroid artery , which supplies blood to various brain structures, and the superior hypophysial artery . The internal carotid artery then divides into the anterior ( anterior cerebral artery ) and the middle cerebral artery ( media cerebral artery ), which together supply large parts of the cerebrum . The point of division is called the "carotid T".

As a rare variant, the posterior cerebral artery ( arteria cerebri posterior ) also arises primarily from the arteria carotis interna . Connections of the vessels on both sides and the basilar artery form the Circulus arteriosus cerebri (Circulus Willisii).

The initial segment of the internal carotid artery , in particular, is a predilection for the formation of atherosclerotic plaques . These can either narrow the vessel ( carotid stenosis ) or, in extreme cases, close it completely, or cause a cerebral infarction through an embolism .

The dissection is a crack that can also lead to acute vascular occlusion. The cause is often trauma.

In the intracranial course (within the skull), small bulges ( aneurysms ) sometimes develop , which, if ruptured, lead to the highly acute subarachnoid hemorrhage .