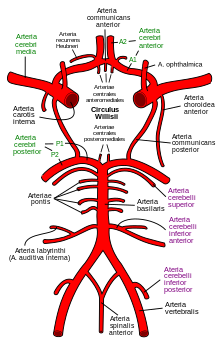 The Circulus arteriosus ( cerebri ) ( Latin arterial ring (of the brain) ) is an arterial vascular ring in mammals and is one of the extracerebral anastomoses of the brain . When people it is supplied by three vessels with blood and is the midbrain at the base of the brain around the pituitary stalk and the chiasm of anterokaudal (front and below). The idea of ​​a ring through which blood circulates is usually incorrect. Rather, in most healthy people it can be assumed that the three brain-supplying vessels split into terminal branches that are connected to one another. This connection is usually not so strong that a sudden, total closure of one of these vessels in front of the ring can be compensated for by the other vessels. In the case of chronic stenosis , however, the anastomoses increase, so that in extreme cases a single feeding vessel is sufficient to ensure the blood supply to the entire brain. 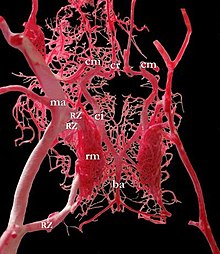 Circulus arteriosus of a sheep 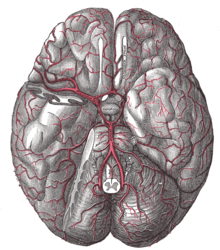 The basilar artery ("artery belonging to the (brain) base") runs from the spinal cord through the foramen magnum to the brain stem. It arises from the confluence of the left and right terminal branches of the vertebral artery . From the basilar artery, before it becomes part of the arterial circle, various, mostly paired, branches branch off. In many people, one of the two vertebral arteries is hypoplastic or not developed at all , without this having any disease value.

The internal carotid artery (internal head artery) is paired. The front part of the Circulus arteriosus is formed by it and its branches.

External carotid artery (only in animals)

In some mammals ( arthropods , cats , guinea pigs ) the internal carotid artery closes (obliterates) after birth in the section outside the skull. The (intracranial) section located within the cranial cavity is retained and receives its secondary inflow from branches of the maxillary artery . In this intracranial initial section, the internal carotid artery in ruminants forms a so-called “miracle network” ( rete mirabile ), a division into many small, communicating arteries, which in turn combine to form a large arterial vessel. In cats and other predators, a branch of the external carotid artery, after passing through the sphenoid bone, forms the anastomotic artery , through which the main part of the blood supply to the arterial circuit runs. This is not the case with humans. In guinea pigs, about 40% of the blood volume is transported to the cerebral arterial circuit through the internal ophthalmic artery.

The cerebral arteries are branches of either the basilar artery or one of the two internal carotid arteries:

Branches of the internal carotid arteries:

Branches of the basilar artery:

Disturbances in the arterial blood supply can lead to a stroke . The obstruction of a vessel (e.g. by a thrombus ) or the injury to the vessel wall, as can occur as a result of an aneurysm (see also subarachnoid hemorrhage ) are typical causes for this. In Moyamoya syndrome, which occurs mainly in Asians , the vessels in the brain slowly narrow, which leads to strokes and transient ischemic attacks .