The sphenoid bone ( Latin: Os sphenoidale or Os sphenoides ) is one of the bones of the brain skull . It lies relatively deep in the middle of the skull and forms the rear area of ​​the eye socket ( orbit ) and, together with the occiput, the base of the skull . After puberty, the body of the sphenoid bone fuses with the basal part of the occiput to form the os tribasilare .

The name Os sphenoidale , German sphenoid bone , for this skull bone probably originated from a spelling mistake by a monk in the Middle Ages. The Os sphekoidale (in ancient Greek σφηκώδης sphekodes , wasp-like '), in German wasp bone , became Os sphe n oidale. In fact, the sphenoid bone with its wing-bearing body, which is detached from its bony connection, does not look entirely dissimilar to a wasp.

Historically , the sphenoid bone arises from two bones, the anterior and the posterior sphenoid ( prephenoid and base phenoid ). In humans, both parts fuse together before birth. In many other mammals , both parts , connected by a cartilage connection ( synchondrosis ), can still be clearly distinguished in juvenile animals. Only in the adult animal do they fuse together ( synostosis ).

Both cuneiform bones are similar in structure to a vertebra (especially the atlas ) and, in contrast to most other cranial bones, arise from a cartilaginous precursor through enchondral ossification . Both have a body ( corpus ) from which two wing-like projections ( alae ) extend.

External relief of the cuneiform bone of a person (Latin inscription)

The sphenoid bone (shown here in yellow) connected to the base of the skull; the opening of the optic canal is designated here with the “ optic foramen ” (English lettering).

The sphenoid bone has two pair of bone processes, the wings of the sphenoid bone . The bilateral wings of the anterior sphenoid bone ( Ala parva or Ala ossis praesphenoidalis , in humans Ala minor ) are relatively small in humans, in most other animals they are wider and form a large part of the posterior orbit. They are each pierced by the optic canal , which is used for the passage of the optic nerve ( Nervus opticus ). In humans, they terminate medially and posteriorly in an extension, the anterior clinoid process . The cerebellar tent ( tentorium cerebelli ) belonging to the hard meninges is attached to these processes .

The two wings of the posterior sphenoid bone ( Ala magna or Ala ossis basisphenoidalis , in humans Ala major ) are relatively large in humans. In each wing there is the foramen ovale , which is the exit of the mandibular nerve (one of the three main branches of the 5th cranial nerve ). In some animals, the foramen ovale is an incision ( Incisura ovalis ) of a larger hole ( foramen lacerum ) at the base of the skull. In humans, the foramen rotundum can also be defined in the large wing of the sphenoid bone. It includes the maxillary nerve (another main branch of the 5th cranial nerve). At the far end of the large wing of the sphenoid bone is the foramen spinosum , which in humans, horses and dogs serves as the entry point for the middle meningeal artery into the cranial cavity .

Between the two wings of the sphenoid bone, a gap-shaped opening, the fissura orbitalis superior , which is relatively large in primates, remains open, in most other mammals simply referred to as the fissura orbitalis . Some cranial nerves enter the eye socket through this opening ( oculomotor nerve , abducens nerve , trochlear nerve , ophthalmic nerve ). The orbital fissure of the cloven-hoofed animals fuses with the foramen rotundum to form the foramen orbitorotundum and, like in humans, the foramen rotundum serves to pass through the maxillary nerve .

From the body of the posterior sphenoid bone arises from the rostroventral direction of the wing process ( processus pterygoideus ). Together with the palatal bone, this delimits the choans . In most mammals, but not in humans, the small clasp-shaped wing bone ( os pterygoideum ) is located medial to the wing process . The origin of the wing process is pierced longitudinally by a thin canal, the pterygoid canal , through which the pterygoid nerve (also called the vidian nerve , named after the Renaissance Italian surgeon and anatomist Vidus Vidius ) reaches the pterygopalatine fossa (wing and palate fossa ). In dogs and horses , the wing process is characterized by a larger longitudinal canal , the canalis alaris , which the maxillary artery passes through.

Internal relief of the cuneiform bone of a person (Latin inscription) 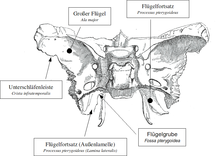 In front of the Turkish saddle there is a channel for the junction of the optic nerves ( chiasma opticum ), which is known as the sulcus chiasmatis .

In the body of the front sphenoid bone in humans and some animal species, the spongiosa (Diploë) has been replaced by a bulging of the nasal cavity . This sinus is called the sphenoid sinus ( sinus sphenoidalis ).