This article covers the zoological taxon of dogs; for the house dog see there. For additional meanings, see Dogs (disambiguation) .

The dogs (Canidae) are a family within the superfamily of the canine species (Canoidea). The dogs include, for example, the foxes , various species known as “ jackals ”, coyotes and wolves , their domesticated forms, the domestic dogs , which gave the group its name.

The Canidae have four complete toes on the hind feet and four ( Lycaon ) or five ( Canis , Cyon , Otocyon , Speothos ) on the front feet, whereby the first toe of the front feet is not functional (weight-bearing). All canids are toe walkers , which means that they only touch the anatomical toes when they run, not the entire anatomical foot.

The teeth of canines usually has 42 teeth on. On each side there are three incisors (incisors), a canine (fangs) and four premolars ( premolars ) as well as two molars (molars) above and three molars below. The tooth formula for the complete set of teeth is therefore:

The formula for the first generation of teeth ("deciduous teeth") is: 3 · 1 · 3 · 0, that is, canids have no molars when they are young and only three premolars in each quarter of the teeth.

Canidae are represented on all continents . Originally, they were absent in Australia , New Guinea , New Zealand , Madagascar and Antarctica , but in many of these regions they were introduced by humans , mostly in the form of domestic dogs . In Australia there is even a secondary feral form of the domestic dog, the dingo .

Generally valid statements about the behavior of canids can hardly be made because the individual genera and species differ too much. For example, all canids are carnivores by definition and therefore all show hunting and killing behavior , but this already differs considerably between wolves and domestic dogs .

The different behavior patterns in wolves and foxes, for example, are already evident between the fourth and fifth week of life. Erik Zimen observed in puppies that foxes first pick up the chunks of food when they are being fed, bury them in the area and only then start eating; young wolves, on the other hand, devour as much food as possible and only then begin to bury leftover food.

Sometimes behavior patterns are also recognized between species. For example, Fox describes a successful request to play a Chihuahua by a prairie wolf , mutual submission between young coyotes and wolves, and game sequences between an adult wolf and a red fox .

According to Matthew, Colbert and others, the Canidae can be traced back to Miacis , a "small, crawling, carnivorous mammal" that lived between the Eocene and the Oligocene (about 40 million years ago). Two basic forms emerged from Miacis in North America , Daphaenus (also: Daphoenus ) and Cynodictis (also: Hesperocyon ). The bears (Ursidae) developed from the former, the "ancestors" of today's dogs from the latter.

Temnocyon , an ancestor of the African hyena dogs and the Asian red dogs, and Cynodesmus split off from the Hesperocyon or Cynodictis ; this in turn is an ancestor of Tomarctus , which is the direct ancestor of wolf ( Canis lupus ), foxes ( Vulpes ) and some others such as Borophagus , Aelurodon and probably also Otocyon .

The on phenotypic ( morphological ) differences based traditional classification divides the recent dog into two tribes , which the genuine foxes (Vulpini) and the Real dogs (canine). However, within real dogs there are also many species that look like a fox . 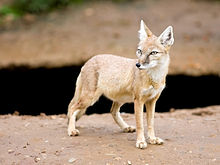 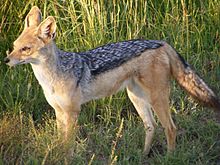 Taxonomy on a molecular genetic basis

Modern methods for determining the relationship and the mutual evolutionary relationships of the organisms are based not only on more objective methods of characteristic analysis (see →  cladistics ) but also on the comparison of genes or DNA sequences at the molecular level. In 2005, Lindblad-Toh et al. (2005) proposed a kinship hypothesis of the canids, which was created with the methods of cladistics on the basis of such molecular genetic data. In this approximately 15 kilobases of exon - and intron - sequences compared.

This hypothesis had some fundamental consequences with regard to the classical system:

Nyakatura and Bininda-Emonds (2012) achieved slightly different results for the canids in a detailed “supertree” / “supermatrix” analysis of the relationships of all predators, which in addition to the cladogram structures of previous analyzes also included around 45,000 base pairs from the GenBank database . With them the African wild dog ( Lycaon pictus ) is not in the wolf clade, but is the sister species of the South American forest dog ( Speothos venaticus ) and both form the sister group of the common clade of wolf clade and South American clade. Accordingly, there are three different main lines within the classic Canini. In a separately carried out “supermatrix” analysis, which was based only on the DNA data, the results deviated even more. a. in that the genus Vulpes appears as a paraphyletic grouping at the base of a common clade from Canis and some South American representatives. However, the “supertree” and “supermatrix” methods are controversial as they are based on incoherent data sets.

In addition to the 34 still living species of dogs, a total of around 180 fossil dog species are known today. With new discoveries, this number continues to rise. In vertebrate paleontology, the Canidae family is divided into three subfamilies: the Caninae , to which all current ( recent ) dog species belong (accordingly, plus fossil representatives, identical in content to the Canidae family in the recent zoological sense, see above ), and the extinct subfamilies Borophaginae and Hesperocyoninae . The Caninae also represent the geologically youngest fossil dogs that only disappeared around 10,000 years ago at the end of the Pleistocene, such as the American forms Canis dirus and Protocyon .

The classification of the Hesperocyoninae follows Wang (1994), that of the Borophaginae Wang et al. (1999) ( Mya = million years ago).

Distribution area of ​​the Borophaginae